Maybe not as “springy” as we thought!

Maybe I shouldn’t complain, but we didn’t flee Canada to deal with freezing temps nearly at the Mexico border!  I guess last year’s experience in Texas (a bit further south, influenced by the Gulf of Mexico – warm & humid) wasn’t quite a reality for Arizona!  Also, reports say it’s been the coldest winter in 50 years here.

Feb. 9:  Upcoming – 4 nights of temps of -4, -3, -4, -1 then 0!  At the moment I’m creating this blog, it is only 4 deg warmer here than in Calgary (which is experiencing another Chinook)!  It’s also windy, so the rest of the laundry got done & Bill worked on processing his photos (which are 2 years behind the times!).

Feb. 10:  -4 this morning – ACK!  Nonetheless, it was sunny so we drove just a little south of here & walked for a couple of hours on the De Anza Trail.  We didn’t see anything new, but because it is along the river, we found a dozen or so species of birds.  The Rose-throated Becard is a famous sighting in this area (2004), so ever-hopful birders keep returning.  A lovely day for a walk, despite the cold morning.

Feb. 11:  When I checked Calgary weather, it said -4.  When I checked Amado weather (where we are), it said -4.  There is something wrong with this picture!!!  It also rained quite a bit this afternoon – but it is something they can really use.  I keep waiting to see the “blooming in the desert”, but apparently that will happen around the end of Feb/early March – if there is enough moisture.  Fingers crossed!

Feb. 12:  This morning we were planning to do a short walk because Bill has some work to do.  When I checked the weather, Calgary was -2, Amado was -3 with freezing fog!  Last evening the rain turned to snow & I took this photo out our window (because I didn’t want to go outside-hence the blurriness) to show the snow on our neighbor’s black bbq :

We decided not to do a walk, thinking we might even seen dead birds!  High is only supposed to be 11!  So another day “in”.  YUCK!

Feb. 13:  When I checked Calgary weather at 6 AM, it showed +2 in Calgary – here in Amado it was -5.  What-the,,,?  We needed to get out though, so drove down to Patagonia to walk  the Nature Conservancy land there, which was closed last time we visited.  We needed gloves, warm coats & hats to start off, but once the sun got up a bit, it did warm up.  Lots of bird activity along the beautiful little stream, which was covered in something like duckweed (not sure what it it) – very green amongst the tans & brown everywhere else.  Ruby-crowned Kinglets were flashing their ruby crowns at us (well, there were many around, so I guess they were feeling their oats!),  These tiny birds (just over 4″ long) often nest in the tops of fir trees and are very hard to see & hardly ever get to see their ruby crown (sorry, can’t see it here!).  Here’s one for you:

Black & Say’s Phoebes flitted about but perched just above the water for wonderful views in the sunlight.  A large flock of Yellow-rumped Warblers bathed, drank & did some flycatching  also on the stream.  We were on the alert for a Rusty Blackbird which had been sighted & I was lucky to spot it as I was looking at a Gila Woodpecker, being right in the same binocular view – saw its bright yellow eye glowing from irridescent black background!  It is new for the list & we added 2 more:  Brown Creeper & Western Screech Owl!  The owl is a LIFER!  Here he is (he is only 8 1/2″ tall), sunning himself from his nest hole:

Here also is a Brown Creeper – who can walk up & down tree trunks searching for insects (he is only 5 1/4″ long): 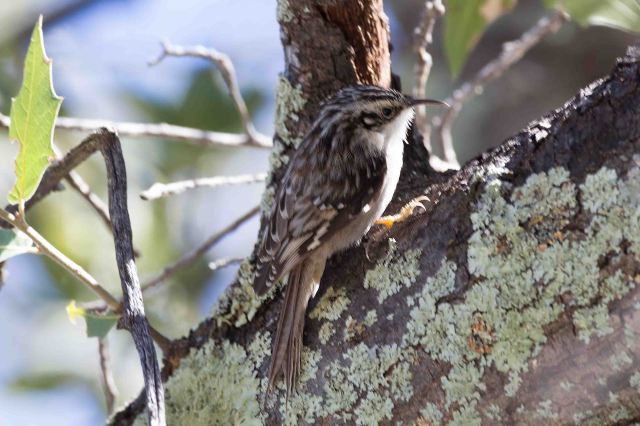 Feb. 14:  Went off to Madera Canyon again to find the Rufous-capped Warbler.  Bill found it, although I didn’t see it, as I was following a Winter Wren (which was also unusual for the area & a number of birders were seeking it here).  Unfortunately, the warbler was gone too quickly for a photo.  Next Bill found the elusive Montezuma Quail!!!  A LIFER, but unfortunately I didn’t see it either, being a few feet away looking at something else – ACK!  Since we will likely never get a photo of this very attractive quail, here it is (photo from the web – not Bill’s): 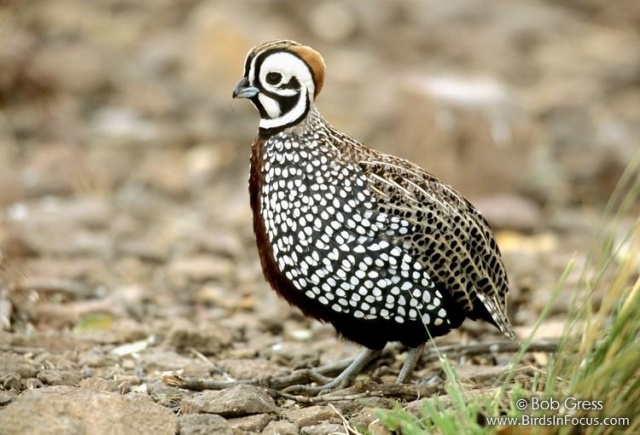 We found 37 species on this walk – an excellent day!

Feb. 16:  Bill had a conference call yesterday morning, so we just took a short walk on De Anza Trail where we only saw 6 species!  We still enjoyed the lovely day for a walk.  Today we headed out early to Patagonia to photograph the Western Screech Owl in the morning when he has sun shining on him (photo is above),  Lots of other photographs today but wanted to add this very cute Bridled Titmouse (only 5 1/4″ long):

We stopped at Patagonia Lake campground where the trogon is seen, but didn’t find him today.  Nor the Ruddy Ground Doves which were reported.  Still had a nice walk there.  We were pretty pooped after 4+ hours walking!  Imagine how Bill felt carrying that humongous 12 lb. camera & lens!  Came home & had a nap!

Went out to Elvira’s in Tubac (the artsy town just 15 minutes south of us) for Mexican food – what a great place!  Amazing atmosphere also with crystal glass teardrops hanging from the ceiling which are lit with different colored lights throughout the evening.

2 Responses to Maybe not as “springy” as we thought!