Mar 3/4:  Drove into Tucson to rent a car since we’re selling the Jeep & have made an estimate of the mileage (& don’t want to overdo it).  So we now have a little red Nissan 4-door sedan.  We are also investigating storage options, since we have to unload everything out of this RV until our Airstream is ready.  We’re considering a couple of places in Benson where it will likely be easier than driving into Tucson.  Not sure how  the logistics will work yet, but we definitely need a pet-friendly hotel to leave the cats as we negotiate RV & car back & forth.

We got our hair cut at the beauty academy, on the advice of the woman in the office of this RV park.  Bill has not had his cut since we left!  Holy Mackerel it was long & curly (pretty I think).  They did a good job on his.  I asked to have an inch cut off mine, but the girl cut off nearly 3″ & I can no longer get my hair in a ponytail without using barrettes on the sides.  I look like “the funny little Dutch girl”!  These are the chances we take when we leave home – oh how I miss my dear hairdresser Jackie!

Mar. 5:  Finally had the courage to visit Fort Huachuca.  Last year we tried to enter the but when they learned I was not a US citizen, we were turned back.  It was very embarrassing & Bill was really mad.  We knew it was a good birding spot, written up in one of our birding guides to SE AZ, hence the reason we tried to go there.  I called yesterday & was told that as long as I had a form if identification I could go through.  Not sure if the woman really knew what she was talking about, because at the gate, the guard said that as long as Bill is a US citizen & will be with me, we could go through.  Not sure if he was kidding or not (but I don’t think so).  Anyway, we made it.

Drove up Ramsey Canyon as far as our little rental car would take us (not as far as the Jeep).  Walked further up the road & spent about half an hour watching a Painted Redstart flitting high in the trees (got “warbler’s neck” watching it) & it didn’t sit still. Here’s the best photo Bill could get – just shows his red belly glowing.  Not easy to photograph busy little birds high up in trees! 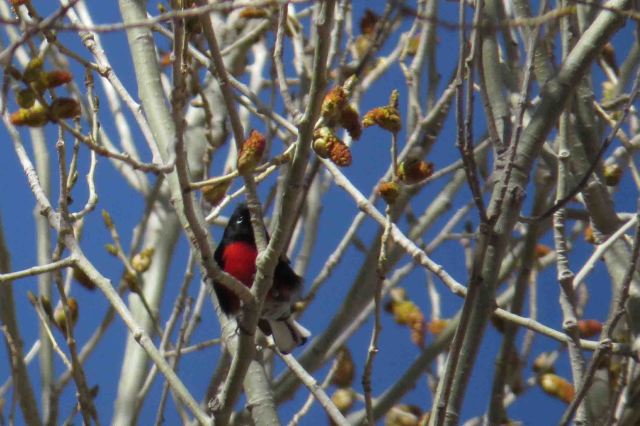 Went on to Huachuca Canyon after getting lost (it’s a big base!) where we saw a pair of Hepatic Tanagers, M & F plus a few other birds.

Mar. 6:  Walked San Pedro Riparian area this morning before the wind came up.  It was very mild & we soon had our windbreakers off & tied around our waists.  What a wonderful day for birding – Wednesday is apparently, the day for guided birding tours (which we didn’t participate in).  Walking towards the stream the tall grass, yellow with dried flowers is as tall as I am.  Isn’t it beautiful!

Looking south across the grass to a small hill, the sky was almost hazy.

FINALLY we saw the Vermillion Flycatcher (actually 5 times, once a male with a female) – a truly spectacular looking bird which brings a smile to our faces every time (sorry, no photos this time).  We found a Gray Hawk sitting on a perch overlooking the pond.  A very pretty hawk found in SE AZ as well as a few places in TX.  Watched a Common Yellowthroat by the stream as it was being pointed out by one of the birding groups.  Had a quick glimpse of a Marsh Wren before it disappeared in the detritus beside the stream – it sang & sang for ages.  There were lots of other sparrows in this area including Vesper, Chipping, Song, Lincoln’s, Rufous-crowned – but no Black-throated today.  On the way out several Canyon Towhees were perched in a bush – here’s one taken with Bill’s big camera.  He only took the small camera with him on our walk. We’ll try again tomorrow to photograph a Vermillion Flycatcher!

March 7:  Another walk at San Pedro did not elicit a Vermillion Flycatcher, however the Gray Hawk was hanging around the pond.  Bill was able to get this shot – isn’t he lovely?

Here is one of the most common sparrows we see in the grassland – Vesper Sparrow.  Such distinctive face markings.

Back at the visitor center the usual suspects were hanging around the feeder.  He’s a beautiful bird as well as a singer – Lesser Goldfinch.  If you look closely, you will see a band on his leg.

On the way home I spotted a Zone-tailed Hawk, which we tried desperately to see in TX last year, unsuccessfully.  It is a Lifer & only I saw it, since Bill was driving down the highway!  Maybe it makes up for the Montezuma Quail?

March 8:  David’s birthday!  Happy to find out he got our card in time!  It took Alastair Usher’s card 3 weeks to get there!  Also Rosemary’s BD & she got my card also.  Yay! My dear friend Sandy returns from Hawaii tomorrow & I can hardly wait to hear about her trip & have her return to her blogs!  I’ve missed her!

The weather today is very windy & a few showers, so a day of work.  Tomorrow is supposed to also be windy and the high only 9C!  So 2 days inside.  However, it supposed to get warmer after that with highs in the high 20’s by Friday & sunny.  Should get a few trips in this week then.  We’re also watching the Brier – and hoping Alberta is over its horrible start!  It has now won 4 in a row, so fingers crossed!