Second last week and still so much to see!

March 17:  St. Patrick’s day!  Got up at 3 AM (I was awake at 2, waiting for the alarm to ring) to get all the way down to the Chiricahua Nat. Monument for Bill to take photos of the sunrise on those beautiful rocks!  It wasn’t that cold when we left the campground (11 C).  By the time we reached the top it was 5 C & very windy!  I dozed in the car while Bill went out to face the elements – with some success:

In May 2011 a fire raged through the area for a month.  It has left scars that will take a lifetime to heal, but there is a stark beauty as well. 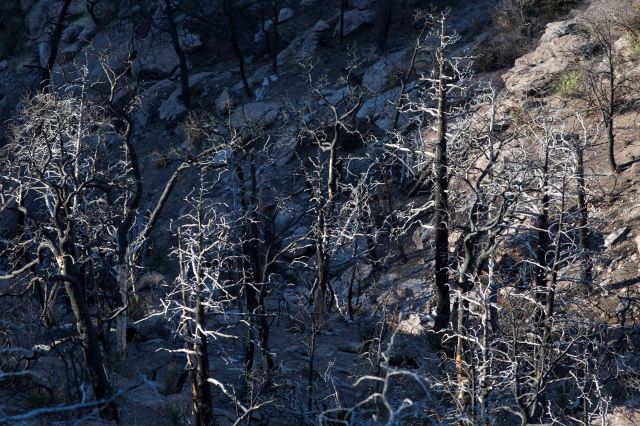 On the way home we stopped at Whitewater Wash to see if we could find any of the interesting species that have been reported there, but no luck.  We did however, find a flock of female Lark Buntings in a yard before turning into the area – a new bird for the list!  We (Bill) also photographed a few of the birds there.  After spending the winter with a pale head, the Avocet now sports its lovely rust coloured head & neck!  Reminds me of my bathroom at home where we have a carving of an Avocet next to the sink!

Long-billed Dowichers foraged.  Sometimes it is hard to see their bills – their heads are like sewing machines probing the mud at the bottom of the slough, so it is unusual to catch them like this! 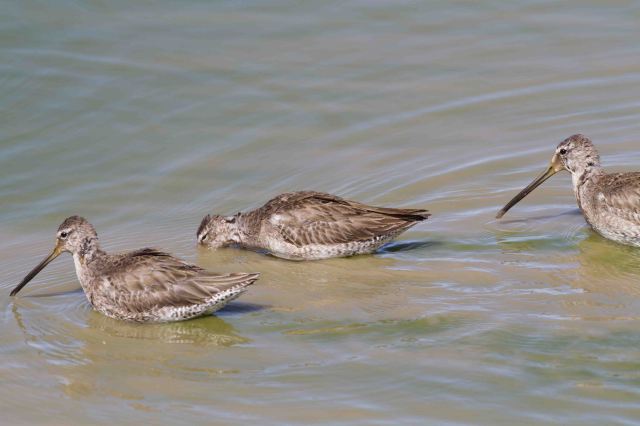 I have been hoping for a nice photo of a Loggerhead Shrike with his bandit mask.

March 18:  Since the wind was supposed to pick up again this aft, we just went down the road to try our the upper part of San Pedro Riparian area, which we had not yet visited.  Walked for 3 hours and added 1 new bird – Yellow Warbler.  One of the most common warblers in NA but absolutely beautiful in its spring color – bright lemon yellow with faint red lines streaking its breast.  No photo as Bill’s shoulder is suffering with all the carrying of the big camera & he only had the little one.  Also, just a quick look then it was gone.  Just shows how hard it is to get these shots!  We also saw hundreds of sparrows.  An interesting phenomenon is that Brewer’s Sparrow sing in flocks!  We passed through a flock of what must have been hundreds of them, all singing sweetly at the same time – it was amazing!  We also saw a Barn Owl fly quietly through the woods along the river – and must have seen around 30 species on this walk.

March 19:  2 hours to the east side of the Chiricahuas & Portal once again.  Really a beautiful day for birding – around 70 F & just a slight breeze.  5 new birds for the day, which is pretty good.  I guess the most unusual was a Bobolink, which flew in front of the car – there is no other bird which looks like it – very easy to identify.  We have seen a Lucy’s Warbler before, but not for a very good look.  This one was in one of the people’s yards who encourage birders.  Just a record shot, which Bill did not want me to  insert here – but I couldn’t resist it because he caught it in mid-hop on this flowering fruit tree.

As we walked back to the car we spied a rather large lizard warming itself on the sunny side of a house. 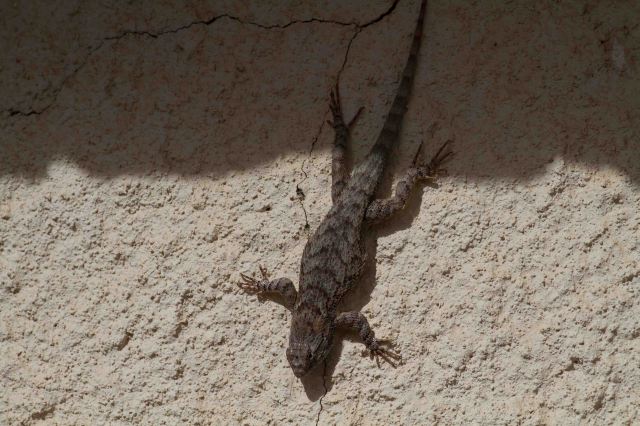 Each time we walk down this road, we spy a Montezuma Quail – atop the gate of the of the houses with feeders.

This is probably the best we’ll do regarding these quail.  Oh well, maybe next year (oh, don’t worry I haven’t given up hope!).

March 20:  This morning we headed down the road to French Joe Canyon – although there were warnings about the road.  As soon as we took the turn, we headed right back out of there – it was horrible!  This will need to wait fort another car than this rental!

Plan B was a walk through San Pedro north area again – just past Fairbank, now a ghost town.  Along the river we found lots of nice birds again.  Here is a Cooper’s Hawk which, unfortunately, didn’t turn to face us (he has a beautiful white front with rust-colored horizontal barring all the way down).

A little later we found an immature Cooper’s – mostly facing us, although he doesn’t look anything like an adult (still a beautiful bird!). 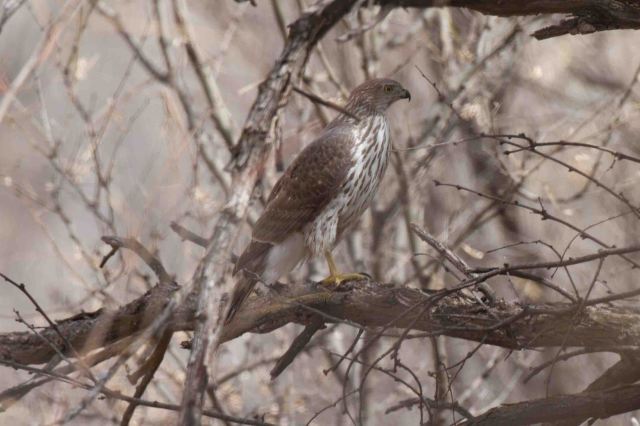 Again we passed through hundreds of sparrows of many kinds.  This time Bill got a photo of a Brewer’s Sparrow (the kind that sings in flocks – like we heard the other day & again today).  It may be about the plainest, ugliest sparrow in NA – but what a beautiful voice!  I guess each of us, no matter our faults, has some redeeming feature! 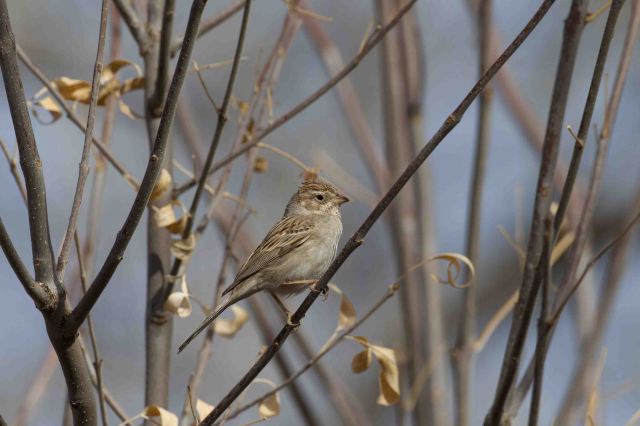 There were (as has become common) many Vermillion Flycatchers along the river.  I can’t resist another photo of this one because he looks like he’s lit up with a lightbulb against this gray background! 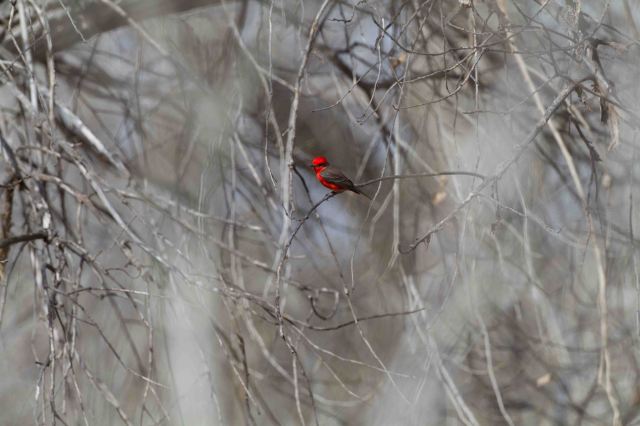 Everywhere we go these beetles (a little over an inch long) are on the pathways.  I try not to step on them, but I know I’ve done it (poor little things – I didn’t mean it!). 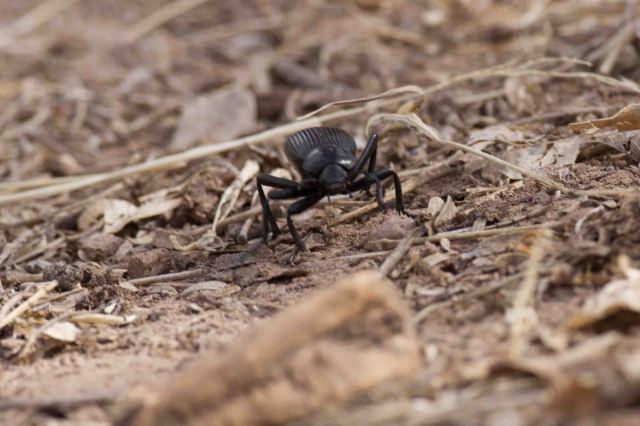 Here is a nice group of trees we noticed along the river.

March 21:  Off to San Pedro south for a quick walk. We ran into the guy who knows the birds there who told us where to find the Inca Doves – but we were unsuccessful.  These doves are the ones at the top of my blog!  Hopefully we’ll catch them next time.  Very little sparrow activity, which is different, so we assume they’re starting their spring migration.  More Yellow Warblers around & lots of Vermillion Flycatchers.

On to Ramsey Canyon where we hoped to find some of the 14 species of hummingbirds that can occur there.  Unfortunately, none were at the feeders, although we spied one perched a little too far off to identify.  Too bad.  Our special find was a Black-throated Gray Warbler!  In a flock with several other species.  No photo – too high & no big camera today!  A willow tree’s green feathers blew gently in the breeze. 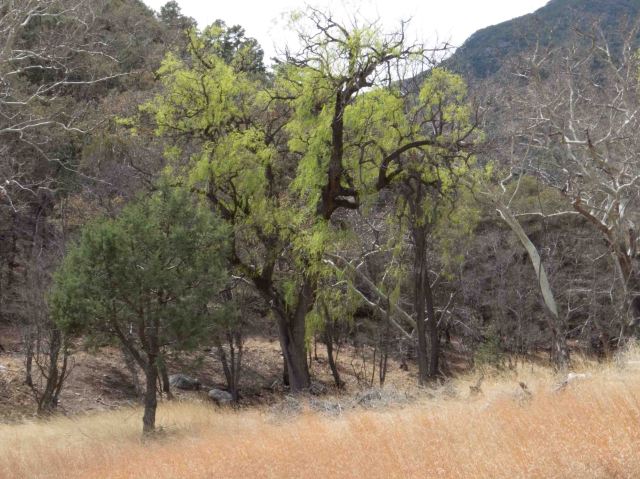 Spent windy Friday at “home” planning our escape next week.  On the 28th we will pack up & drive into Benson to a storage place to put everything we don’t need into a locker.  Then drive into Tucson to LazyDays RV where we will drop off the “beast”, unhook the Jeep & drive to the hotel we’ll stay at overnight.  Then off to the airport to return the rental car & back to the hotel.  Next day we will finish the paperwork which needs to be done & head off towards Vegas.  Not sure when it will be done nor how long it will take.  But we should get home April 1st or 2nd, depending on how the cats do travelling in the car!  ACK!  Keep fingers crossed.  One more blog to post next week and that’s it!