Posted on February 6, 2014 by birderspost

Saturday, Feb. 1st arrived in Willcox (just 1 1/2 hours NE of where we were).  Cooler with showers in the area and windy!  Arrived around noon, set up in a mostly vacant campground, then headed off for a little birding to a couple of nearby spots (golf course was one).  We can hear cranes from our RV park and when we got to the golf course and a little birding area with ponds, we saw them high in the sky (presumably heading back to Whitewater Draw for the night).  Found a lone Snow Goose at one pond, but not much else except a few ducks.  However, the drama was all around us. 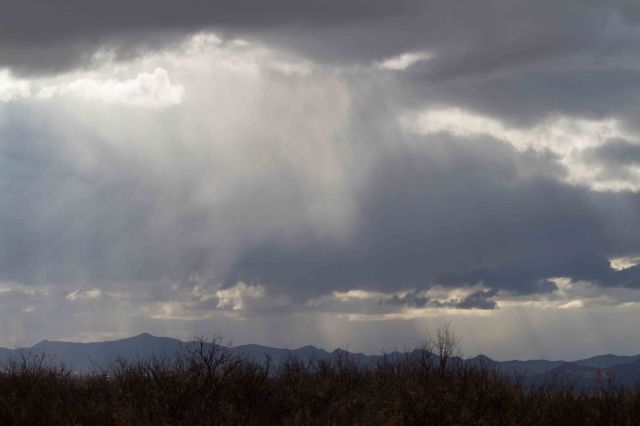 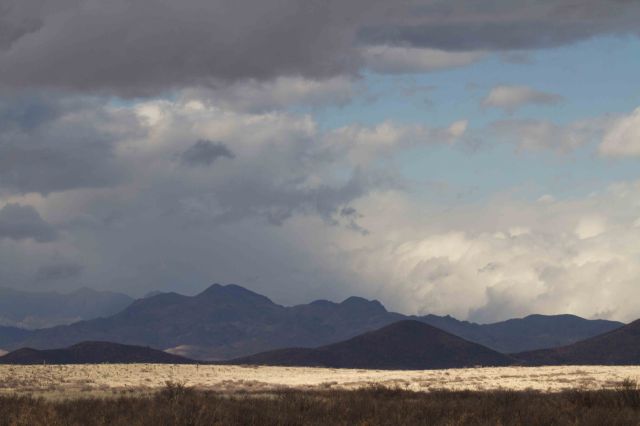 We had wish more rain would have fallen – but just a few scattered showers around the area – not the drought here that California is experiencing however.

Sunday we headed to Cochise Stronghold – an area where the famous Apache Indian Chief holed up with his men during the early 1900’s.  It is a very pretty area, and even had quite a few nice birds.  Our first chance to photograph a Greater Roadrunner, up in a tree.  Contrary to popular thinking, they can and do fly and often sit in trees or shrubs (even fenceposts).

Cochise Stronghold is located in the Dragoon Mountains which contain picturesque rock formations. 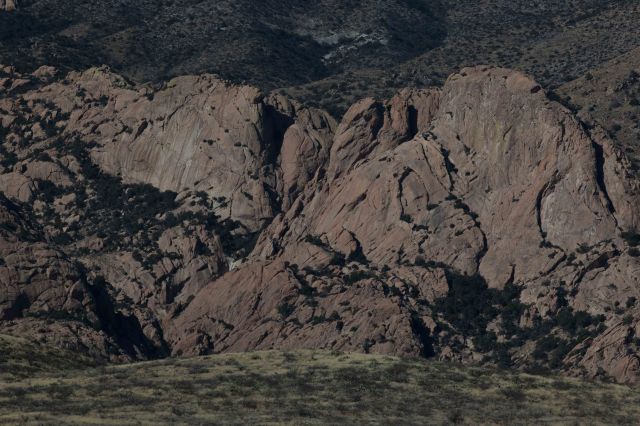 There are some great wooded areas with campgrounds and Western Bluebirds were in abundance.  Couldn’t get a really good shot, but here’s a male in a bit of shadow – followed by a Townsend’s Solidaire, mostly in shadow also.

We circled Willcox Dry Lake (which has just a couple of ponds left) and walked into one of the viewing areas, but too many heat waves to see much.  There are lots of crops grown on this flat land, irrigated by Whitewater Wash (much to our displeasure).  We looked for a Mountain Plover, but no luck.  Lots of Mourning Doves around, some flocks close to 50 or so. 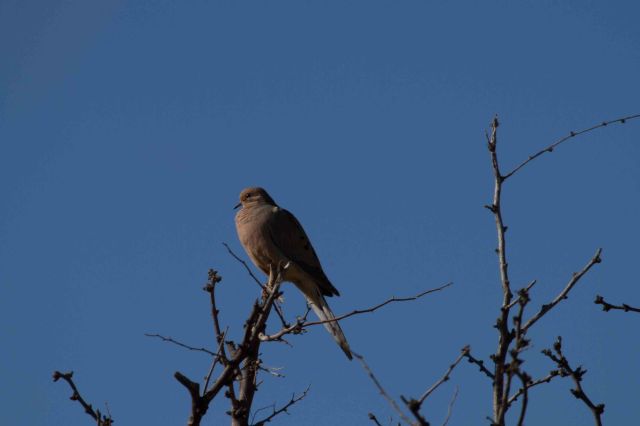 After our little walk into the viewing area (where we saw absolutely nothing except deer, javelina and coyote tracks) we spied 2 of these love birds, just like at SPRA!

Back to watch the Superbowl – Denver lost – I mean an embarrassment!  Oh well, apparently Seattle is also one of Bill’s teams he roots for, so all was not lost (who knows???).

Monday off to Douglas near the Mexican border with a last stop at Whitewater Draw.  There were some interesting clouds forming in the east.

Here are the last shots from Whitewater Draw – our favourite little Vermillion Flycatcher plus a shot of the Snow Geese in the air. 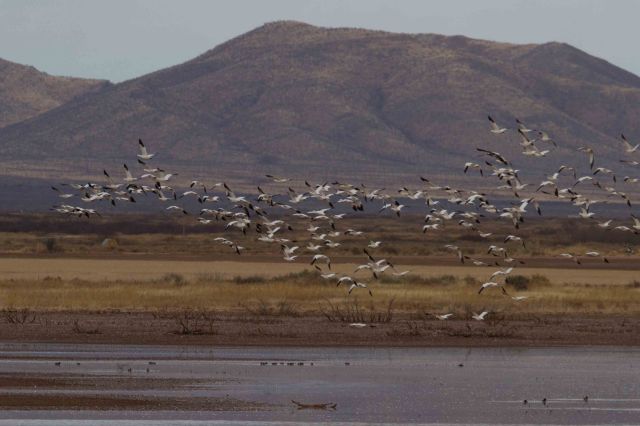 On to Douglas, which turned out to be a bust – except for finding another pair of my favourite runners to take home!  Then on to Sierra Vista to pick up our envelope from Jane with our new credit cards – good they arrived before we leave for the next spot (too far away to go back).  Then a last walk at the SPRA.  We were very happy to add another new species to our list – a male Yellowthroat!  No photo however, too far away.  We also got a shot of a relatively rare bird which looks just like a Northern Flicker:  Gilded Flicker.  His head is brown and his breast patch is more oval shaped than his northern neighbour.

Here are the last 2 scenery photos from SPRA: 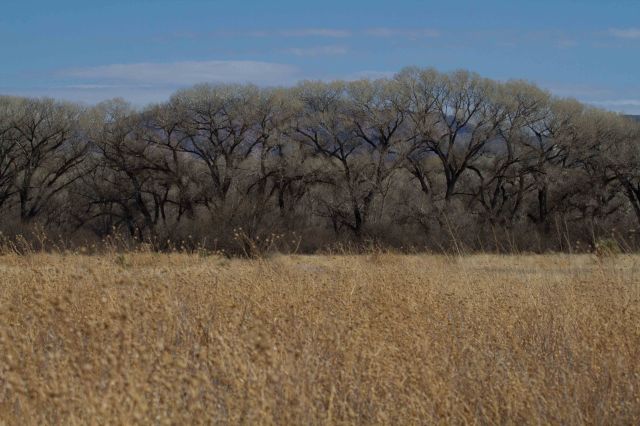 Here’s a shot (though Bill complained it isn’t his best work, since they didn’t stay long enough for him to get them both in focus) – I insisted, since they are the 2 sweeties which appear at the top of this blog – Inca Doves.  They are pretty small for doves, just a bit over 8″ long from beak to tail. 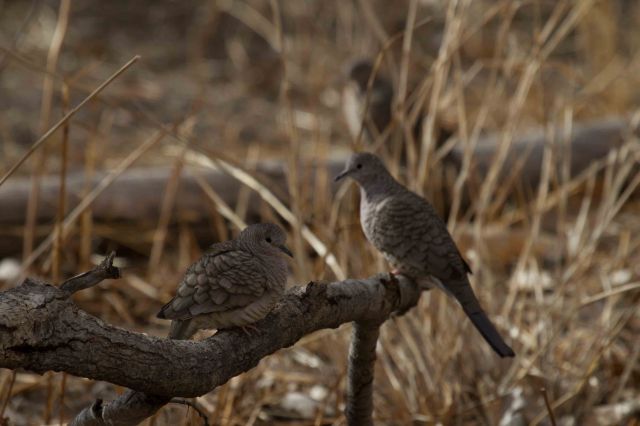 Tuesday we headed for Chiricahua National Monument – our favourite mountains in AZ.  A quick stop at the golf course, produced 7 Am. White Pelicans – surely a sign of spring (headed for Calgary maybe?).

It was a cold morning and we found snow as we got closer to the mountains.  Found out the road to the top would be closed until noon for the snow plow to do his work!  So we took a little walk along the creek at the bottom.  Found lots of birds  – mostly Chipping Sparrows.  Here is a tree full of them trying to get warm in the sun – then a closeup of a single individual.

On the way back we spied a bird high in a dead tree – eventually identified a Kestrel – looking right at us (probably waiting to get one of those delicious little Chipping Sparrows!)

A couple of snow shots and the a few of the interesting rock formations. 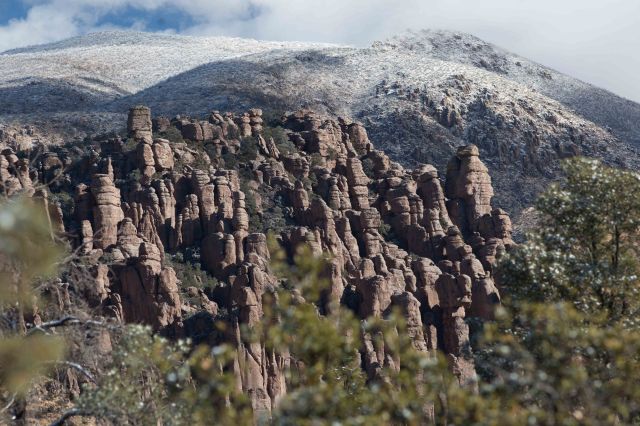 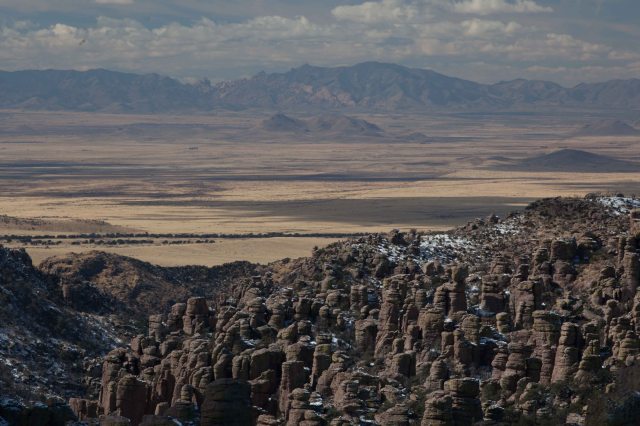 A Mourning Dove was sunning itself on a fence line – waiting for its portrait.

On the way home, we stopped again at the golf course where we found another sure sign that spring is coming!  17 Long-billed Curlews!  These are quite big birds and I think have the longest bill-to-body ratio of any other bird in NA (or close to it at least). 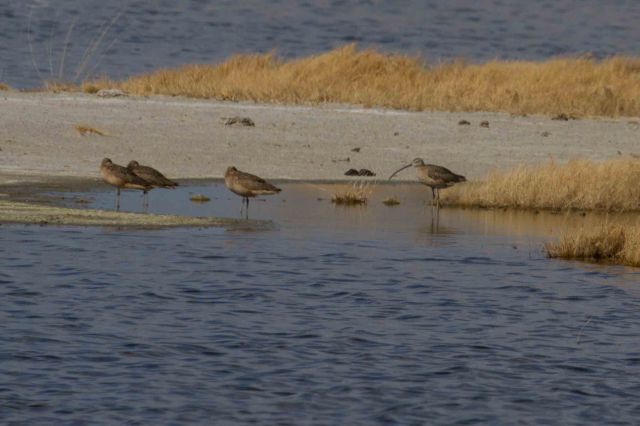 A Song Sparrow was glowing in the sun, so we couldn’t resist a quick shot of him. 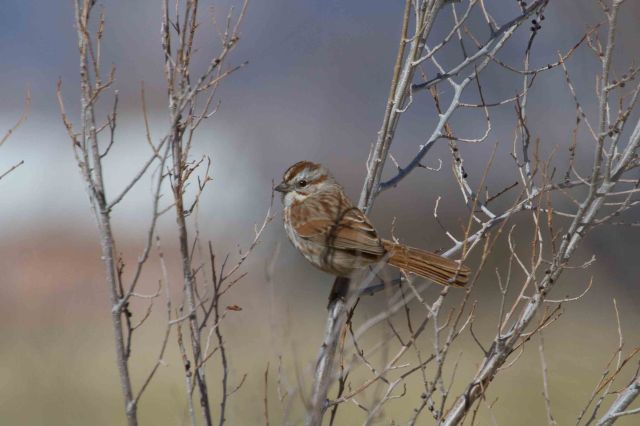 For those who are interested, here is the list from the “path” around our last site in Sierra Vista:

On to Portal, hoping for a few more spring migrants!