Yup – here we are in TX!  Drove all day Thursday – a little further than we planned (which was to stop in Van Horn).  Alpine is a bigger town with a better grocery store (population 6000 compared to 2000 in Van Horn). We stayed here 2 years ago and made a couple of trips to Big Bend – hence the reason we wanted to return!  There are no groceries in Big Bend, so a week’s worth is needed.

The Lost Alaskan RV Resort in Alpine is almost full – different than we’ve experienced so far in our trip.  Temp’s in the mid 20’s for highs, rather than low 20’s.  Decided to stay 2 days here because (3 guesses) – Bill has more work!  WiFi is a bit limited in Big Bend and no phone service (well, a 5-mile trip down the road).  So got all done he can then on to BB Saturday.

Temp yesterday was 28 C for a high – today 29 but here we are in the campground for 2 weeks!  We arrived into this new campground beside the Rio Grande River – to towering cliffs, trees not only in bud, but leaves grown about half size and temps 30C!  First bird we saw was a Vermillion Flycatcher right across from our campsite.  (I think you all have seen enough photos of it!)

We walked the Nature Trail as soon as we were settled because we were excited to be here and hoping to see a new bird or 2.  Matter of fact, we found 2 new birds right away:  Green Kingfisher and Northern Rough-winged Swallow.  What an awe inspiring location – we love it! 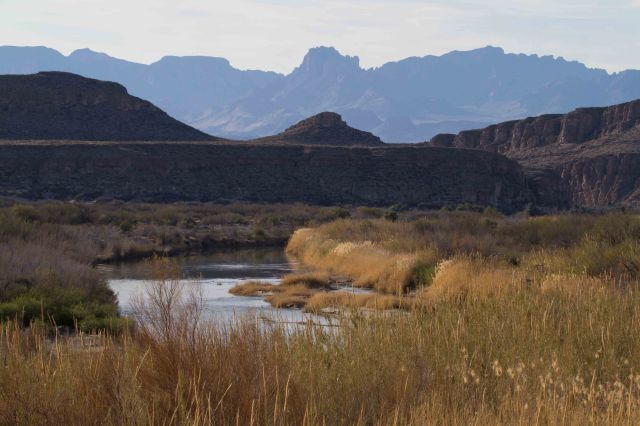 Before any birds, we saw fish in the water.  Bill identifies them as perch. 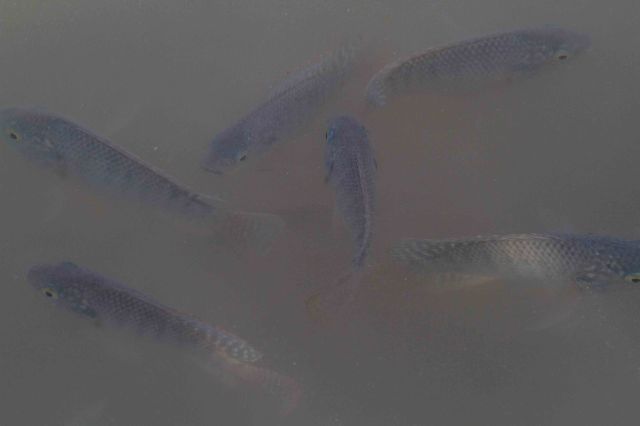 There were lots of snapping turtles on any protrusion above the water.

When we walked up above the river into the hills, we found flowers in bloom. 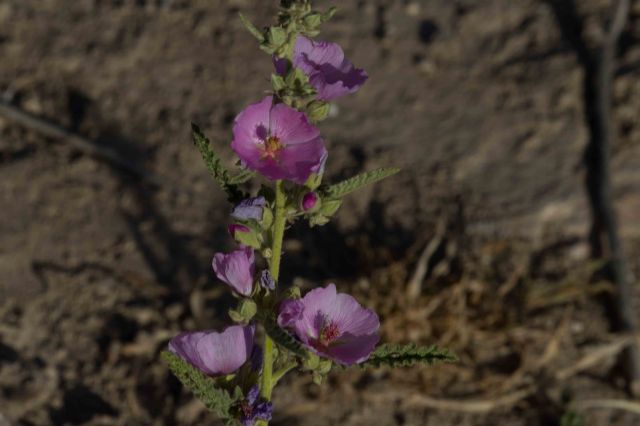 Bill didn’t tell me about this story, but he was watching this Mexican cowboy across the river, trying to get his burro to come along with his horse and 2 dogs!

Back down to the river, there were a number of grackles on a snag – both Common and Great-tailed together!

Sunday we got up a bit earlier than usual to walk the nature trail because it’s going to be another scorcher – high of 40C – yikes. Thank goodness for 2 air conditioning systems in the trailer!

At the ponds, we had a beautiful view of a sleepy Great Blue Heron up in a tree.

On the way in, at the campground which doesn’t have full hookups, we found a female Greater Roadrunner.  I have no idea what she was doing all fluffed up on the post (showing off?).

There are elaborate bridges built through this watery area and we heard Common Yellowthroat singing as well as Marsh Wrens – again saw the pair of sleeping Pied-billed Grebes.  The dead logs and snags make lovely patterns on still water.

On down the road to a trail which borders the river then over to the holding ponds.  Lots of Yellow-rumped Warblers, too fast to photograph, but found another new bird for this year’s list, Golden-fronted Woodpecker.

Finally found our Eastern Phoebe (which we’d tried to find at Empire Gulch in AZ) – much easier here but no photo yet!

Also identified this Ash-throated Flycatcher – such pretty rust on its wing and buffy yellow belly! 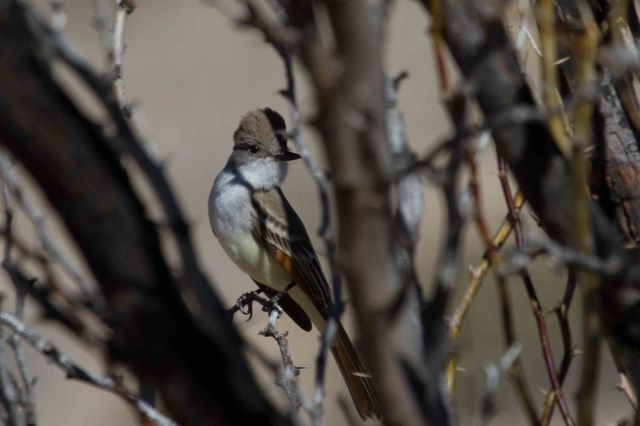 That’s 6 new birds for the list in  2 short outings! Hooray!

Monday we headed back to the main visitor centre and noticed the “Mexican” smog hanging in the hills.  Quite attractive for such a noxious substance.

Then on to Boot Canyon to look for the Colima Warbler.  It has a range from Mexico which extends into S. TX and it nests here.  It is a 3-mile hike uphill and quite rigorous.  We decided to go part way (about a mile) to see the lay of the land and decide if we’d like to do it again at the end of our stay.  The warbler doesn’t usually show up until sometime in March and it’s mid-Felb now.  Saw some nice sights nonetheless, but no new birds. 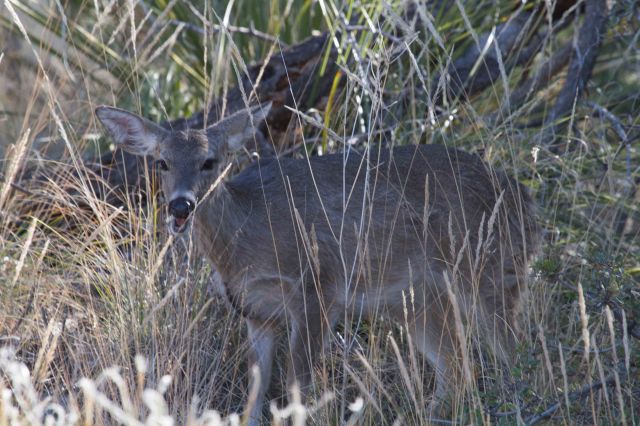 Tuesday was a walk in Bouquillas Crossing/Canyon.  It was a beautiful morning – cool before the heat set in.  Unfortunately there was “singing man” to contend with.  Found out later, his name is Victor and they don’t have a problem with him.  However, we cut our visit short.  Not that his voice isn’t okay, just that he followed along with us – we weren’t happy.

We saw a beautiful Agave in bloom!  I didn’t think there would be any large cactus blooming, but here it is! 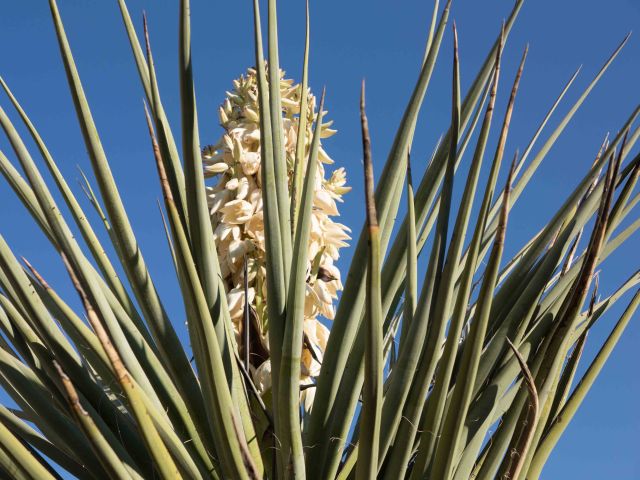 Also enjoyed these prickly pears with the red spines – as well as these unusual red stick-like plants with the knobs on them.

It’s a deep, narrow canyon with high cliffs.  We saw and heard a couple of Canyon Wrens singing but no photos (Bill only brought his small “scenery” camera.  We shall come again and bring one of the bird cameras.

Having such a wonderful time here – only a month and a bit to go!