All our prayers answered…???

Well, maybe, maybe not!  We have indeed added a Montezuma Quail to our list, but it was only heard!  We will not really feel fulfilled until we get a good look at one.  We were given a hint from some birders (from Indiana I think) to go to David Mtn. State Park in TX where the quails are at a feeder.  Unfortunately, we found out  there was a fire in the park in 2011 and they haven’t seen them there since.  So we proceeded up the road to the LE Woods picnic spot and walked some of the Nature Conservancy Trail.  Nothing new there, though we saw a beautiful, male Western Bluebird against the sky.  Unfortunately his glowing blue back can’t be seen from below very well, just his rusty breast and sides.  But believe me, he’s gorgeous! 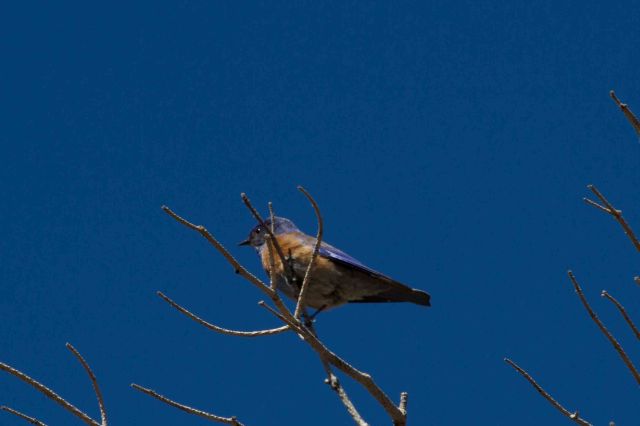 On our way back to the car after about an hour’s hike, we heard the Montezuma Quails.  They were on the hillside opposite the road.  We walked down the road and listened some more, but no appearances by these little beauties.  Perhaps they’ll remain our nemesis?  On the way back to Davis Park, we saw a herd (?) of javelina’s and this time they stayed near enough for a quick shot.  This is a mother with a little one. 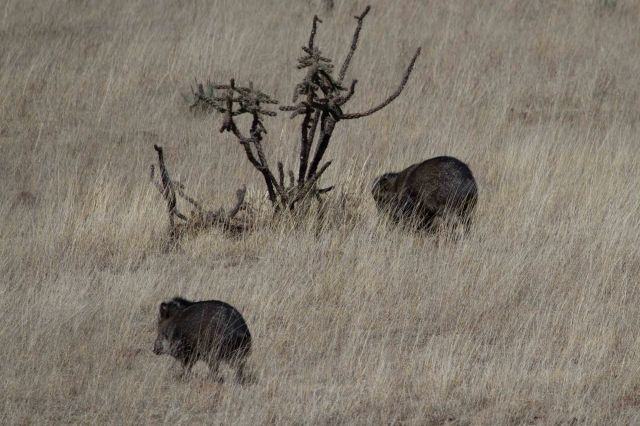 Back at the park, we stopped at the bird feeding station once more and spotted a Black-crested Titmouse!  We haven’t seen one since we stayed in TX a couple of years ago.  They’re so cute and always look shocked because of the white crescent behind their eye! 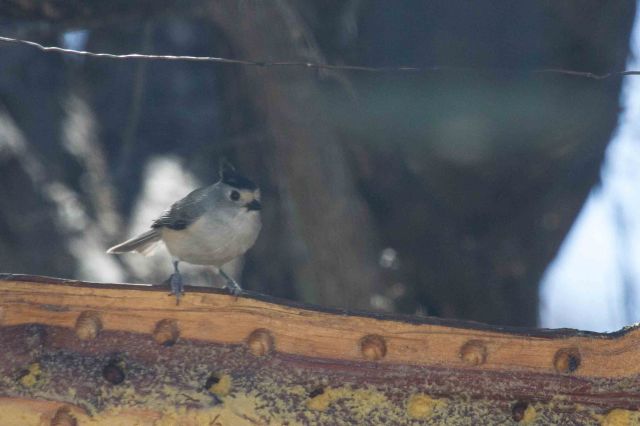 Couldn’t resist a male Lesser Goldfinch in full spring plumage.  Reminds me of a Vermillion Flycateher which always looks lit up from the inside.  Same for this little yellow beauty! 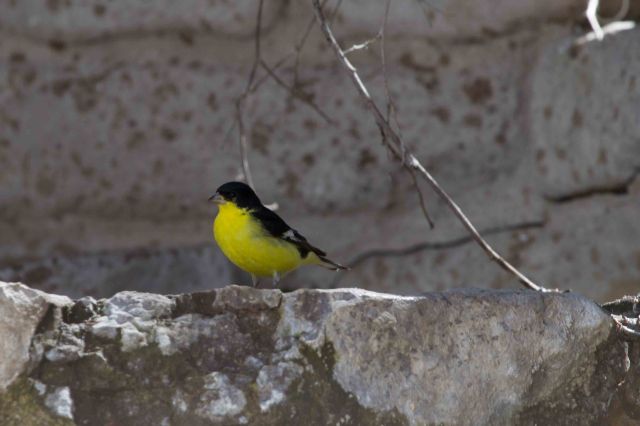 We haven’t seen a Western Scrub Jay for quite awhile – just Mexican Scrub Jays.  So here’s a lovely one sitting on an agave spike.  He has a few gray patches on his cheek and back as opposed to his Mexican brother who is mostly blue.  Pretty. 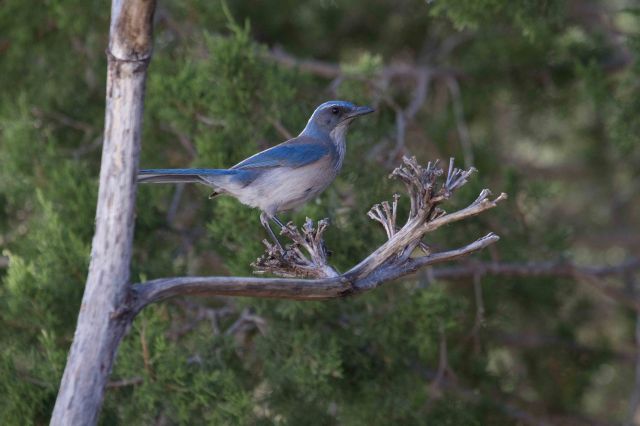 On to Carlsbad, NM.

Arrived Saturday to high winds and hot temperatures – 31 C!  They have a kitchen here at the KOA Campground and offer either delivery to your RV or you may eat in their dining room.  They smoke their own  pork, ribs and brisket – make their own french fries (regular or sweet potatoes), potato salad, and great pinto beans.  Since we’d arrived around noon and had errands in town, we decided to take them up on a dinner.   It was excellent and there are enough leftovers for Bill for another meal.   The hosts of this campground are by far the most cordial  we’ve run across.  Since there is no cell phone service here, they let Bill use their phone when his new Verizon hot-spot mechanism wouldn’t work.

Sunday was rainy, cloudy and highs around 13C.  Bill had to work today, so it was laundry for me.  The wind blew so hard, we put the satellite dish down around 3 PM (I hoped it would go up to record the Oscars!).  Around 4:30 it died down to almost nothing, so we put it back up.  All good!

Bill went to bed early to read and by the time I went in (at 9:30) he was asleep. I had just checked the weather and saw it was supposed to get down to -1C overnight – but I didn’t bother to wake him to go out and plug in the electric hose.  Unfortunately, at 2:30 AM when I got up to pee, the toilet wouldn’t flush – NO WATER – FROZEN!  So I had to wake him anyway to go outside and do that.  It was -4C!

Monday we took the truck in for a service at 7:30, then did some grocery shopping but we finally got out Tuesday to do some birding for the first time.  Visited nearby Brantley Lake (on the Pecos River dam) where we discovered a small flock of Lark Buntings in the scrubby desert nearby, which look like they are starting to come into spring plumage, though still a way to go (they have a month or so though, eh?).  We found a couple of groups of Amer. White Pelicans along with the usual malladrd, coots, etc. These pelicans are getting their nose knobs – they’re ready for spring! The only shorebirds were Greater Yellowlegs and Killdeer. 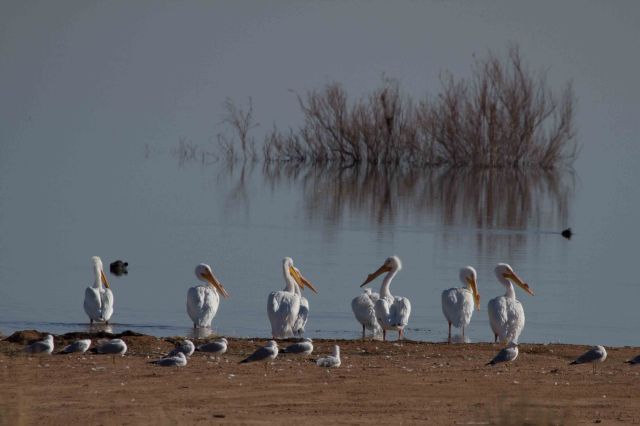 More work for Bill Wednesday, so more laundry for me.  Finally Thursday we headed out – and on the way out of the RV park, spotted Scaled Quail!  Didn’t think we’d be able to get a shot, but sure enough, so now we have a personal shot – just for the record (not from the internet)! 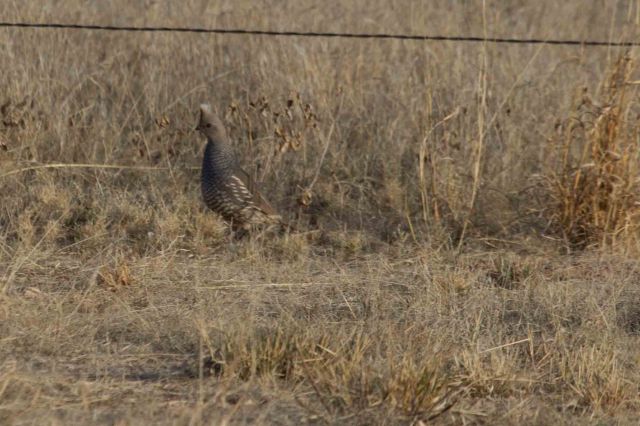 On south toward Carlsbad Caverns stopping first at the McKittrick picnic area.  Lots of large trees and a pond.  Here we found one of our favourites, the “lit up from inside” Vermillion Flycatcher (can’t ever have too many!). 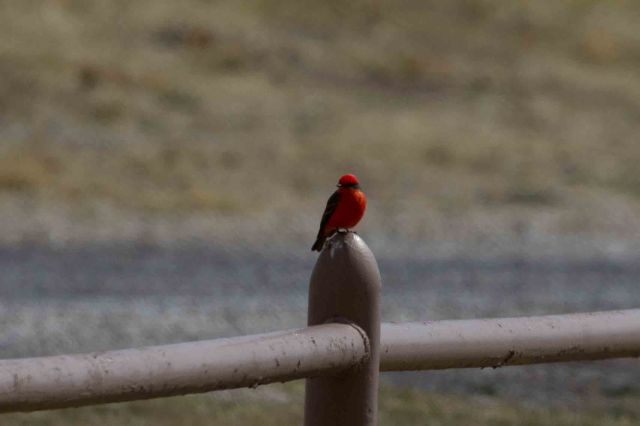 Then a flock of Amer. Robins – probably heading for Calgary! 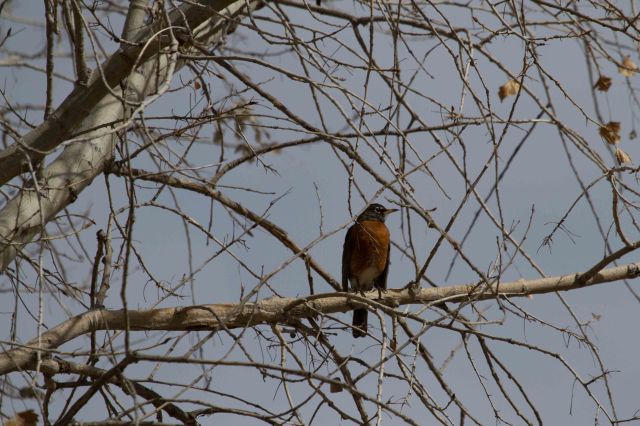 Several Western Bluebirds were flycatching in the area, so here’s another a little closer than the last time. 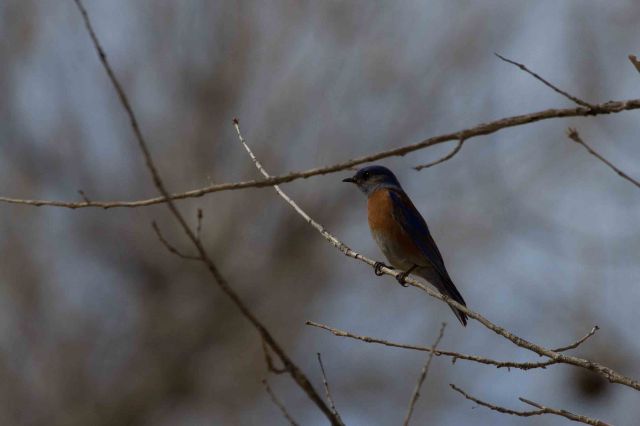 Not much after that, but a couple from Ohio told us the Cave Swallows had just returned to Carlsbad Caverns – so we made a stop there.  Sure enough we found one!  It was kinda cool, since we were at the mouth of the cave and it flew round and round, higher and higher until it finally emerged.  We also found one of our favourite birds and Bill hadn’t brought his camera – so here’s a couple of shots – record only – of a Canyon Wren.  They’re blown up, taken with my iPhone – so pretty terrible.  But maybe you can see how pretty this little wren is. 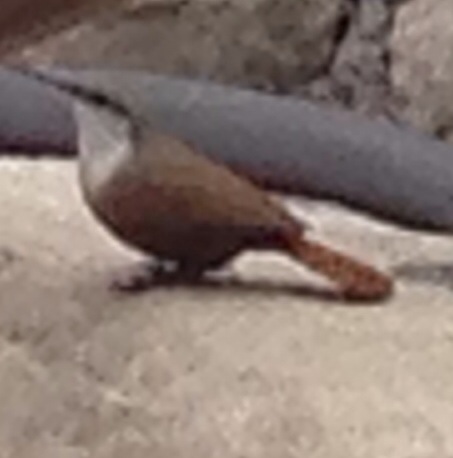 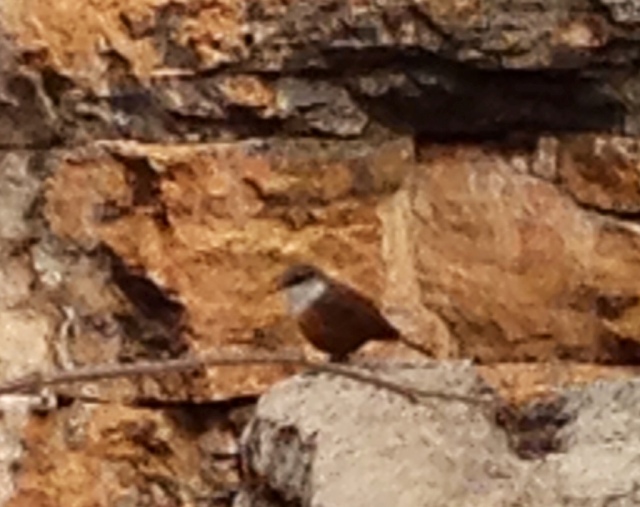 Friday we headed west to the other side of the Guadalupe Mountains, to Dog Canyon.  These mountains would be categorized as “hills” by most Calgarians, I suspect.  But they have their own unique beauty, set in a desert landscape. 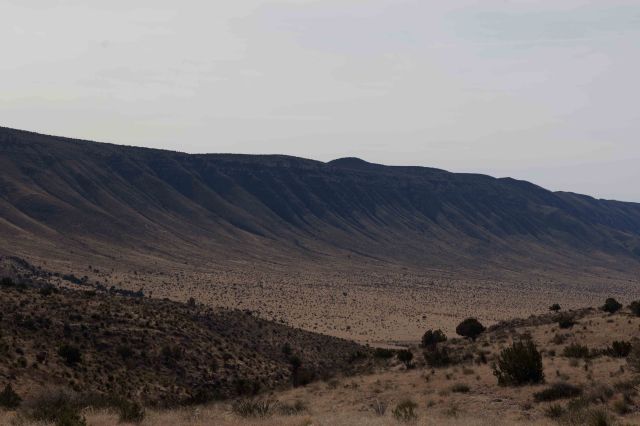 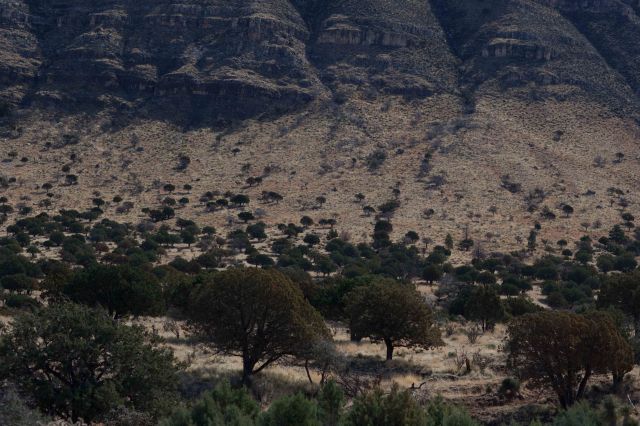 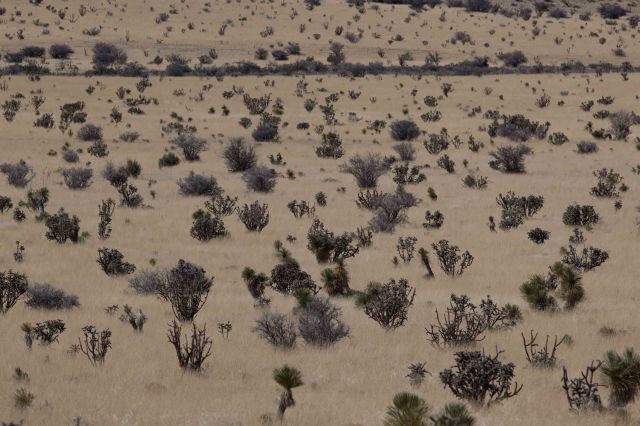 The campground at Dog Canyon contains the state champion Juniper tree.  Hard to get the perspective, but the diameter of the trunk was probably about 3 1/2 feet – about 5 times the size of most of the surrounding junipers. 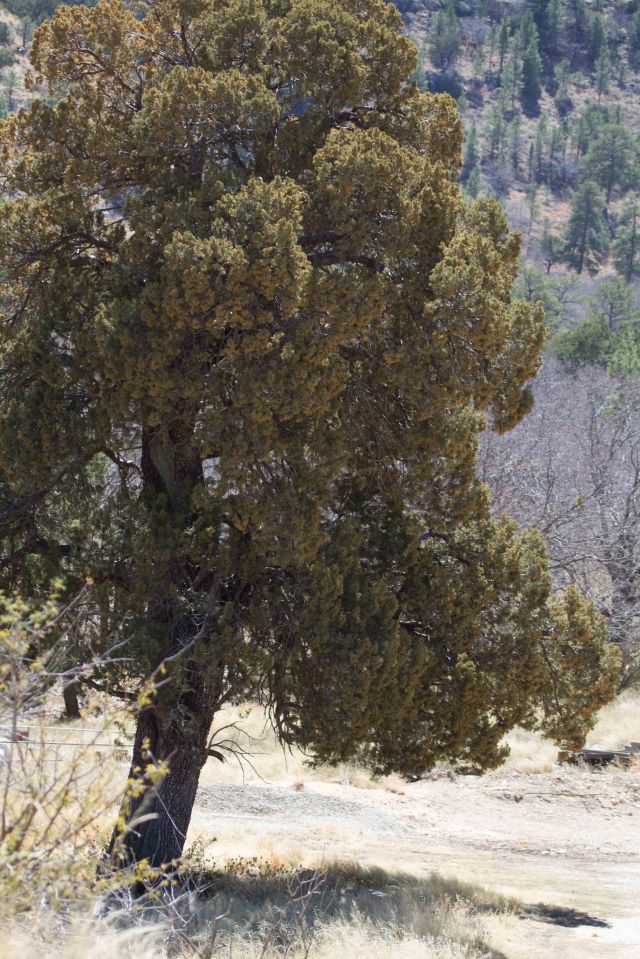 We also added a new bird to our list – Stellar’s Jay.  Just a record shot. 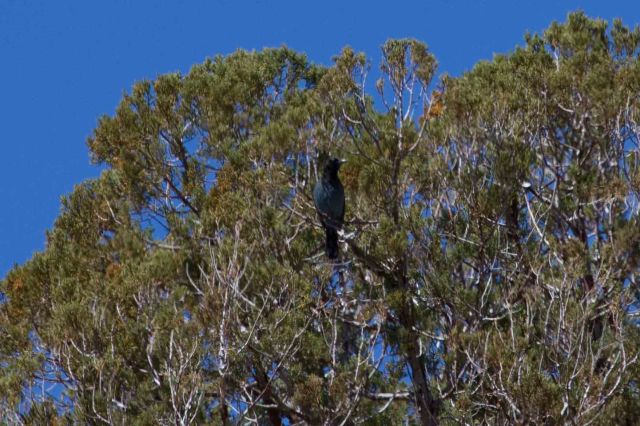 We were hoping for a Williamson’s Sapsucker, but no luck there – nor with Pygmy Nuthatches.  Oh well.

On to Socorro NM tomorrow (for about 5 days or so) hoping for some migrating shorebirds.  More later!