A catchup, and more cats – no birds.

Posted on November 6, 2014 by birderspost

When Bill wrote his tribute to Sasha, I was relieved not to have to write anything myself.  I realized this when we spoke about it and every time we talked about Sasha, I burst into tears.  I think I need to write my own tribute now – hoping for a cartharsis. This little cat wormed his sweet way into my heart in several ways.  The first and something he did his whole life was put his head back as you stroked him (especially while you were sitting on the toilet!), then arched his back to lean into your hand. A very sweet move in my books! After Tyrian died, he did something else he hadn’t done too often when they were both around – look you right in the face when you talked to him.  Bill mentioned how he took cues to his behaviour from Tyrian, so when that guy wasn’t around any more, he had to look to us.   He was very attentive and smarter than we thought!  We always use the expression “you’re smarter than you look” to each other – so we used it for Sasha too! He was a darling who loved to cuddle and be picked up.  He would snuggle right under your neck with front legs extended over your arm. I will miss him always.

Now we have 2 new little girls to help us with our grief – and boy they did.  Natasha and Katrina came into our lives quickly after we returnedd from SK.  Our breeder in Toronto had 2 sister kittens ready for adoption – then there would be none available until November (and we’d be gone).  So we flew out immediately and brought them back – each under the seat in front of us on the plane (they will not ship them!).  We’ve never had 2 kittens at the same time before.  They were 4 months old & cute as buttons (born Feb. 4th) 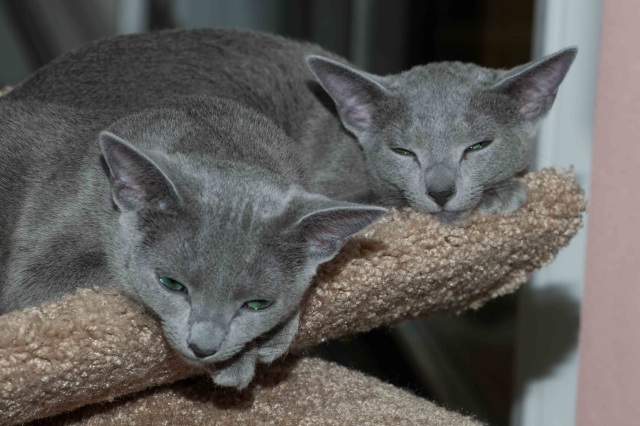