Despite a few showers, the temps haven’t gone much below 10C at night for awhile now.  Day time near 20 or above.  Howling winds on Saturday, so Bill worked and I cleaned (yep – the place is pretty spotless!)  But later in the afternoon the winds died down so we took a little walk at Bentsen.

Here, we saw the usual suspects, but in some nice light, worth a few photos:  Green Jay, N. Cardinal and Eastern Screech Owl.

Jan. 25th:  A glorious day of very light winds, mostly sunny in the morning, getting a bit cloudy in the aft.  High 20C.  Perfect!  Off to ELG to see if we could find a couple of Hooded Orioles.  First we found out a male Wood Duck was seen in the pond in front of the visitor center (never found him).  Then we found out a LIFER was seen in the grassy fields around the ponds – Gray-crowned Yellowthroat!

It is a Mexican bird and there are only about 50 records of it in the US in the last 100 years.  So who got to see it?  Billy – but not me!  When it popped up again, he even got a shot of it – though not great, it is identifiable.  He has sent this photo to one of the local naturalists at ELG and another Parks guy from S. Carolina we ran into.  Yay Billy!  Their habitat is dense, grassy fields.

A few sparse trees dot the landscape.  Back at the pond, a flight of White-faced Ibis flew in.

Here they are in flight and one landing.  They don’t really have much white on their face, just a small white outline.

We saw lots of Black-bellied Whistling Ducks today in different ponds. Here are 3 taking a nap.  As you can see, their eyes don’t always close – always watchful.  We may try for a Fulvous Whistling Duck seen at Edinburg tomorrow.

A Tri-colored Heron also flew over.

I admire the beautiful plumes of the Great Egret.

Jan. 26:  Another beautiful day with light winds, mostly sunny, high about 24C.  Off to Edinburg to see if we could find that Fulvous Whistling Duck.

As we left the driveway of the park, there were a pair of Muscovy Ducks sitting up on the embankment (that the border patrol drive all the time)!  Cool looking ducks, although many say you can’t count them since they’ve been domesticated.  As far as we’re concerned, we don’t make bones about what we tick off:  if it’s on our list, it  gets a check!  They are definitely making their own way in the world! 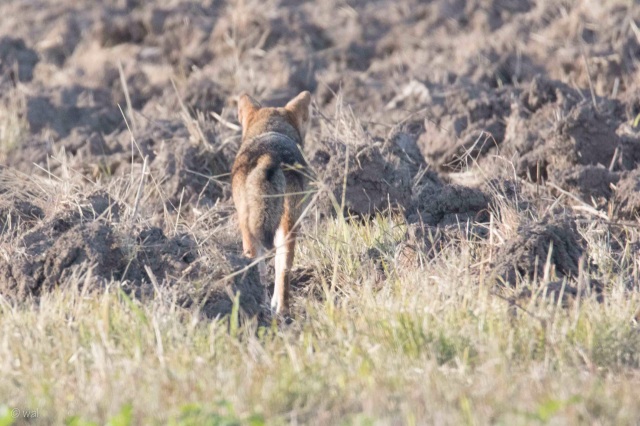 Here’s what we found 2 of running across the road and by the time we got alongside, just got a back-end shot.  It seemed to bode well that we had such a good start as we left our residence!

Edinburg brought disappointment to start with – then success!  As we arrived in the parking the resident rooster make an appearance – a handsome fellow indeed!  We didn’t find that whistling duck, but got some nice shots in the pond. 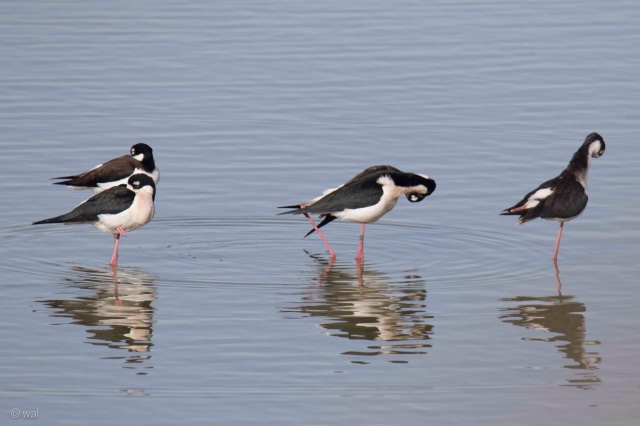 Here are a few Black-necked Stilts, especially for Lorne.  I loved the 2nd shot where it seems to be kissing its partner! 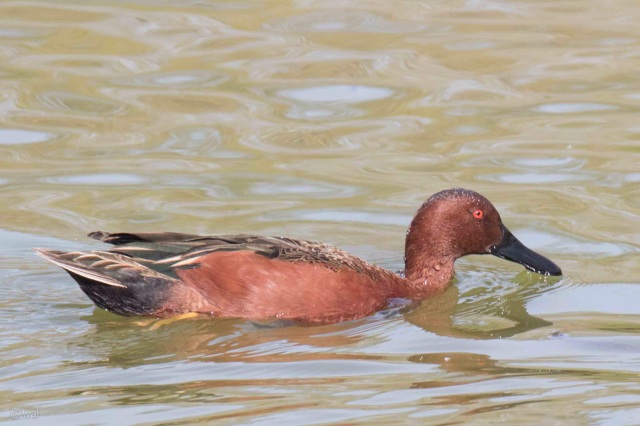 Speaking of birds which make me think of others, here’s another Cinnamon Teal, especially for Gallie.  She passed away just over a year ago and I think of her so often when we’re birding. 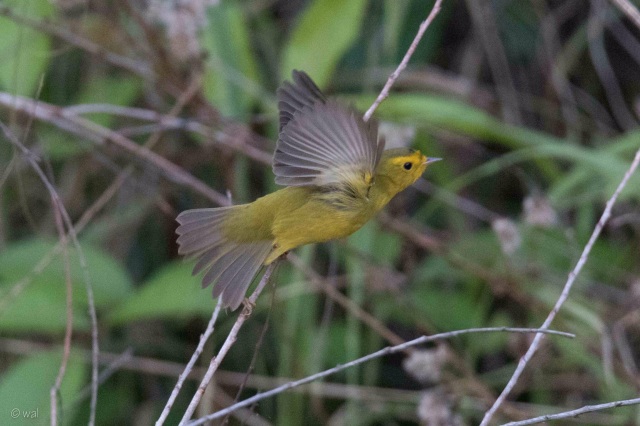 Around the pond where we looked for the Winter Wren.  First we found a Wilson’s Warbler.  In breeding plumage he has a black cap, not just this pale gray.  (Later we found a more mature Wilson’s, but couldn’t get a shot).  For Sandy, I’ve added the taking off shot!

Happily, we found our Winter Wren!  Not much to look at this LBB, but sings like a…well, sings an amazing long, warbling song.  If you have an app – listen!  (Frannie!)

Back on the grounds I couldn’t resist including this lovely Black-and-white Warbler.  Such a nice photo. 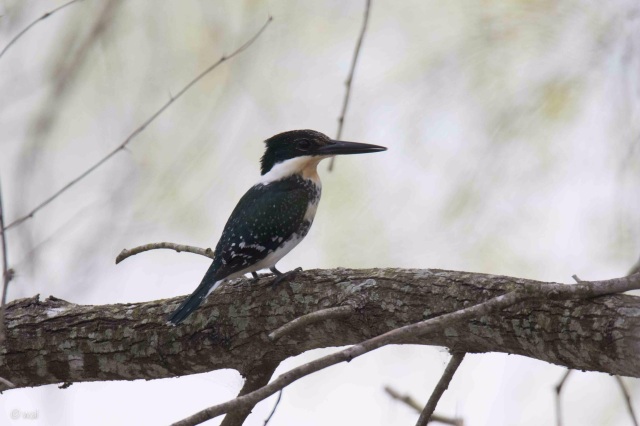 Around the pond both a female and a male Green Kingfisher were hunting (male with the rust breast).

After 6 hours on our feet yesterday, we’d decided not to do too much today, so left Edinburg just after noon and headed for Hidalgo to see if we could find the Prairie Warbler.

Took a little walk along the border fence there, on the grounds of the  old Pumphouse (now a museum), where we found a Red-shouldered Hawk (imm).  New for the list!

My honey Billy, indluged my love of many other things, like flowers and butterflies.  A little white one looked so pretty on the green plants with blue flowers. 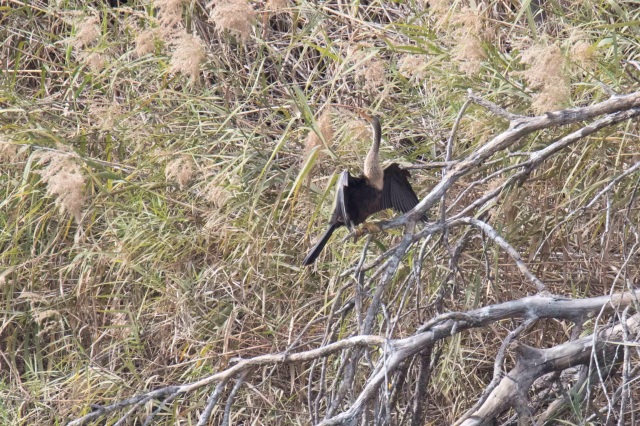 Down on the river an Anhinga (often called the snake bird because of it’s neck) was drying it’s wings.  An ancient bird.

Back at the pumphouse, we asked about the Prairie Warbler and spoke to a man who knew where to look for it.  We sat down on some benches in the shade, keeping out eyes peeled on the area he mentioned.  After about half an hour, decided we weren’t going to see it, when we noticed a movement and got our glasses on it quickly enough to both identify it!  Not long enough for a photo, but we saw the bright yellow with black stripes on the sides!  A LIFER!

We headed back down the street where Monk Parakeets were said to be nesting on some telephone poles.  Sure enough, there they were!  They live in large colonies year-round, in urban areas.

Here are 2 peeking out of their nest which is about 3′ across! 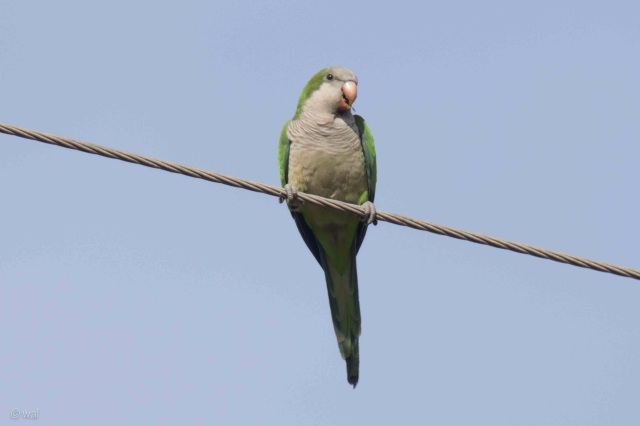 Here’s one perching on a wire nearby.  Would love to get a photo of it flying – with large bright blue wing tips!  Another LIFER!

Finished for the day, we headed home.  Only to discover, sitting on a wire next to the road, a Common Black Hawk!  Another LIFER!  Couldn’t stop on this major thoroughfare to photograph it, but we were jacked!   What a day!