Thurs. May 28th:  An effing (as in “freezing) cold and windy day with high only 11 (winds gusting to 50 kph).  It was only 6 when we left – a far cry from the 20’s we’ve been enjoying for almost 2 weeks!  It rained overnight – THANK GOODNESS – much needed, since there is a fire ban in effect.  It spat a few drops most of the day, but nothing for which we needed rain gear. 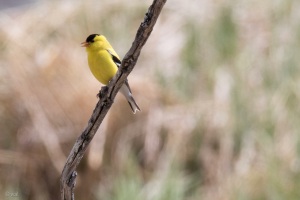 We stopped at Spruce River before we met our pals and captured an American Goldfinch.

Don and Carman had just pulled in a minute earlier at the Elk trail at 8:15 AM where we met.  The sound of the wind blowing in the trees sometimes drowned out the sound of birds!  But Don has very sharp ears and knows his birds, so we got a few new ones. 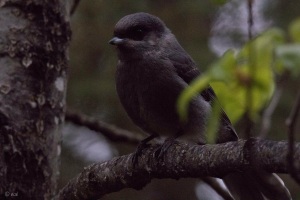 We’ve seen families of Gray Jays for over a week, so the young have fledged.  Here’s one now, not quite the same as an adult. 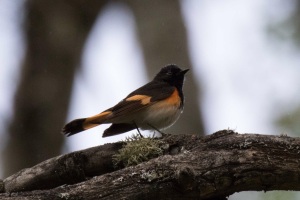 This is an American Redstart and they put on quite a show.  Both males and females sing. 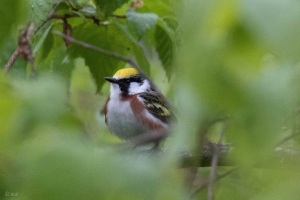 I was unable to see this Chestnut-sided Warbler.  It was buried in the foliage, singing in one spot, and only Bill’s height allowed him to get this shot.  I know I’ll see one later, probably at Mud Creek.  One of our favourites!

We walked into a more protected pathway and the sun started to come out.  Boy it felt good!  As we returned to our vehicles, Moe & Marg had arrived and were on their way up the path.  We decided to head back, with a stop here and there, have lunch and a nap – then go birding later. 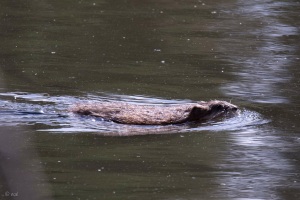 The only thing we saw on the way “home” was this muskrat.

Our afternoon outing was at Waskesiu River which has a boardwalk along one side and a meandering path on the other. 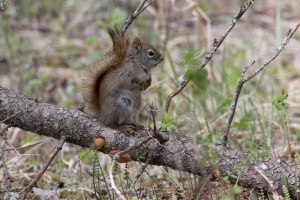 One of our first wildlife observations was this American red squirrel.  They usually chatter and run away, but this guy stood stock still.  The birds were pretty quiet this afternoon (morning being the best time to hear them). 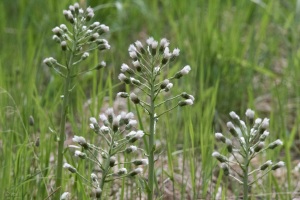 But the flowers were sitting low and not moving!  Coltsfoot. 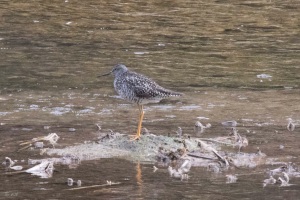 This Greater Yellowlegs (which we posted a photo previously, up to its thighs in water) was sitting on a rock, showing its yellow legs!  When we got back to the highway this family was basking on the shore in the grass, but moved away as we got closer. 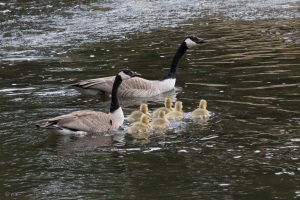 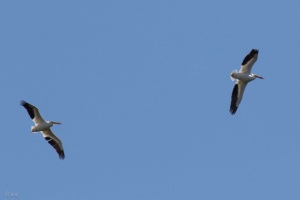 Overhead, American White Pelicans soared.  They are wonderful flyers and we often see them wheeling high in the sky.  Then it was back to Pete’s Terrace for pizza and beer with our buds.  Not only did we enjoy the company immensely, but the pizza was awesome!  We haven’t eaten here before, but we sure will again!  Moe & Marg had to leave for Birch HIlls right after dinner since they didn’t want their garden to freeze and needed to be there to cover it.  But not before Marg presented me with 3 bottles of her home-made chokecherry syrup — YUMMM!

Fri. May 29th:   A later morning birding with Don & Carman, due to the cold –  birds aren’t moving so much at freezing temps.  Nonetheless, we headed to Mud Creek. 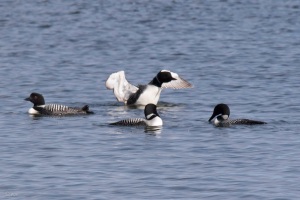 Our first sighting was these 4 Common Loons near the shore.  We haven’t yet got a photo of loons but we find them on most of the larger bodies of water. 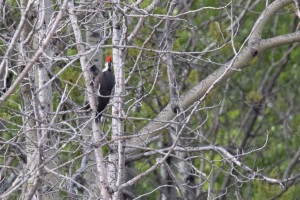 Although this isn’t a very good shot of a Pileated Woodpecker, it is a sad story.  Just after Bill photographed him, a Sharp-shinned Hawk chased him away.  The woodpecker is much larger than the hawk.  Pileated is 16 1/2″ beak to tail with nearly a 30″ wingspan.  The hawk is only 11″ long with a 23″ wingspan – but faster and more deadly.  I’m afraid we’re one woodpecker poorer now. 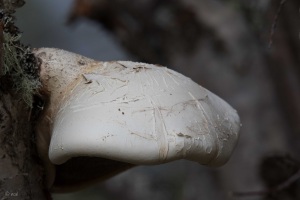 This interesting large mushroom is about 6″ across.  There was another on the same tree, stunted by growing up against the next tree.  I couldn’t find out what it was by Googling. 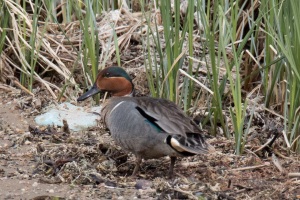 A pair of Green-winged Teal moved away as we approached.  I think this male is beautiful.  He’s showing a thin line of green on his wing but when he flies it a large patch of green.

We were happy to find a Swamp Sparrow singing out in the open, a little closer than the last photo from another bog. 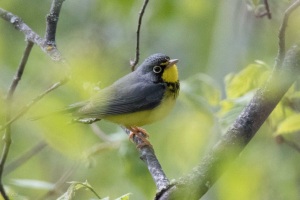 Canada Warblers were singing in several places.  Don said it is the most he’s seen in one area.  What a beautiful bird and a lovely song to boot! 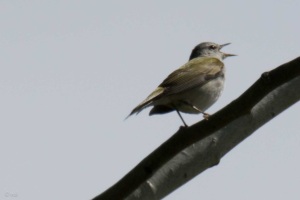 Finally got a shot of a Tennessee Warbler – the ubiquitous bird of PANP!  It may not have all the colours of other warblers, but it has a lovely blue-gray head, white eye stripe and green back.  What a singer! 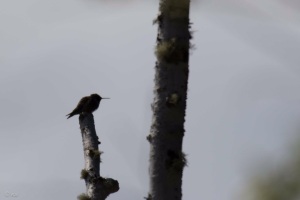 We found another Chestnut-sided, but couldn’t get a very good shot of it.  As we were looking we saw a Ruby-throateded Hummingbird alight on this stick.  No colors visible, as it was against the sun.  At least you can tell it’s a hummer.

We said goodbye to Don & Carman in the parking lot.  It always seems such a short time birding with Don, especially after he comes all the way from Broadview (a 6-hour drive)!  I guess the birds in his yard holds more intrigue than we do (or the birds here!).  Actually we stopped again with Don to find this: 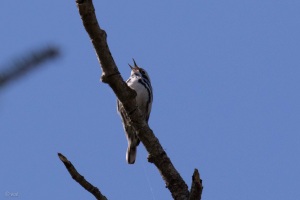 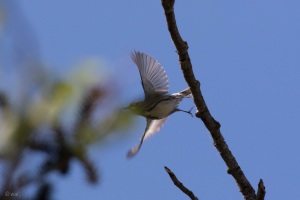 A Black-and-white Warbler.  It has sufch a faint little song – I don’t know how Don heard it.  I guess it’s great when you’re young and have good ears!  (Don turns in 60 mid-August!)  Unfortunately, we didn’t get a photo of the group this time…

…so here we are!  L-R, Carman, Marg, Moe, me & Don.  Bill taking the photo.  Selfies weren’t so common back then – should done it now, I know!  We thank our friends for coming up to see us – we love them and we love PANP!