Oh, woe is me – complete idiocy on my part!  On my Nov. 24th blog post, I mis-identified one my Lifers.  The Ruddy Ground Dove was actually a Common Ground Dove.  Don’t know how it happened – just one of those things!  Please forgive me.  I have fixed the post.

NOTE:  You will also have to forgive my posting duplicate photos of birds on the blog.  The thing is, they are never the same & if I like them, in they go!

Dec. 5:  An adventure at Stormwater Treatment Area 5.  Just north of us, less than half an hour, is a series of roads which criss-cross a large area of canals & lakes/ponds used to help eliminate pollution from farming.  We knew where to go but didn’t know there would be a birding group going out today.  So we tagged along with the last volunteer from the parking area.  It was a rainy day & got rainier & ranier!  Out truck is a complete mud-heap at this point.

But it was great to see a Crested Caracara on the way in (too quick to photograph).  Bill wasn’t sure how his photos would turn out today due to all the rain & clouds.  You be the judge.

Just another Belted Kingfisher.  Just too pretty to pass up when it sat for us (& for Natasha as well). 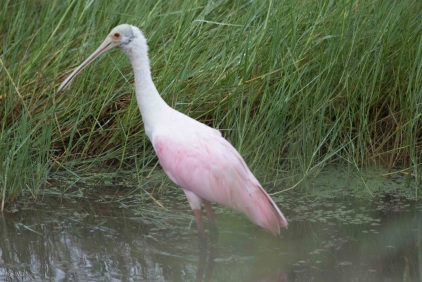 Closer shots of a Roseate Spoonbill.  Really not the prettiest of birds close up, but just gorgeous flying.  Hoping to get a flock flying closeby sometime. 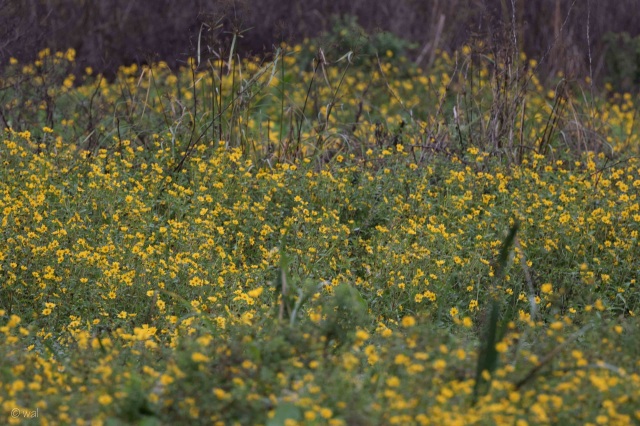 Now here are some of the yellow swamp flowers along the way – huge fields of them!  Not close enough to identify & I wasn’t getting out in the rain today to do it.

We passed a Green Heron which the woman didn’t call, but Bill took a quick shot  With better resolution you can actually see the raindrops in the air!

You wouldn’t know this with such poor light, but this is a Peregrine Falcon. 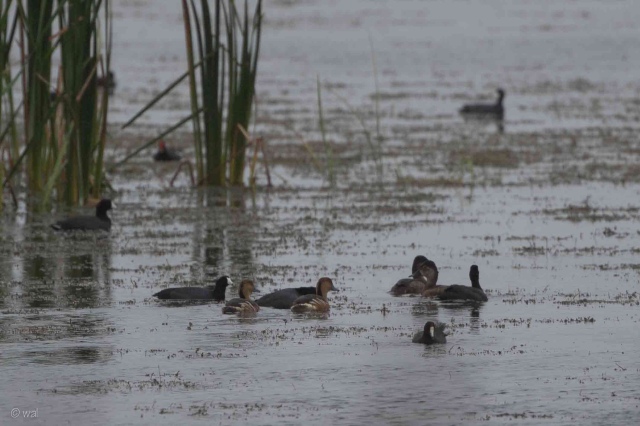 A Lifer: (I promise this time – but only in NA – seen previously in Central America).  Fulvous Whistling Duck are the 2 small, tan-looking ducks w/ dark rear ends & a white stripe above it  Left, centre, swimming away & to the right.  Interestingly, we noticed a Canvassback just to the right of them when we zoomed in!  Saw quite a few new ducks today.

Here is a Purple Swamphen – ANOTHER LIFER!  This time for real, since they are an escaped species.  They are originally found from the Middle East, through the Indian subcontinent to southern China and northern Thailand.

They are huge & look at the size of their feet!  They eat eggs & chicks from other birds as well as pull up vegetation with their large bills.

We eventually caught up with the group & went out again for a short time.  The most excitement was created when we spotted these 2 Tropical Kingbirds (not very common in Florida, I gather).  We have seen them before, but they were a lovely sight with bright yellow breasts amongst the yellow flowers. 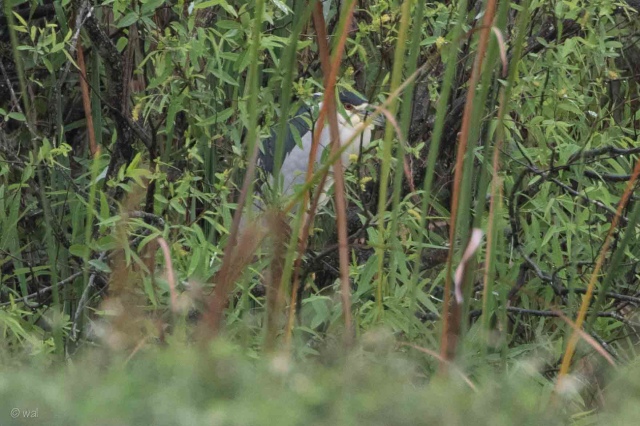 Hiding in the reeds nearby was a Black-crowned Night Heron.  Can you spot it?

On the way out a large group of Snowy Egrets were feeding amongst the waterplants.

This Tri-colored Heron was with the above.

It was quite the adventure as we splished & splashed through the puddles & completely wiped out our white truck!  But it was lots of fun – a great day!

Dec. 6:  Stormwater Treatment Area 1:  Another truck day, but we stopped at this wetland & took along our scope to look far away.  There is only a viewing platform (covered, thank goodness).  Our most exciting find was another LIFER!!!  This is a White-cheeked Pintail.  Native to South America, there are a few seen in Florida.  We have no idea how rare it is, but they were courting & when we read about that behavior later, it was exactly right.  We had pretty good looks at them through the scope, but too far away to photograph.

This time we could see most of this croc basking along a canal. 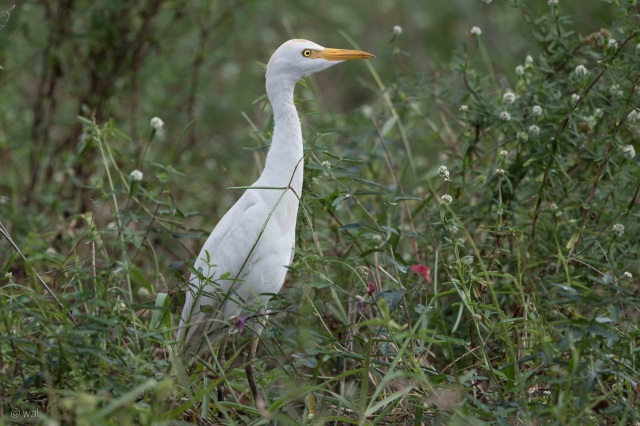 Haven’t yet had a photo of the last of the heron-type species – a Cattle Egret. So many white birds everywhere, it is astounding.

We travelled for several miles along one of the canals to find a roosting place for Barn Owls.  Apparently as many as a dozen or so roost in this large stand of  cypress  trees.  Unfortunately, though we looked very carefully for about an hour, no owls were to be seen.

Could this have been the cause?  Perhaps – don’t know.  Bald Eagle perched on the top of this very stand of cypress! 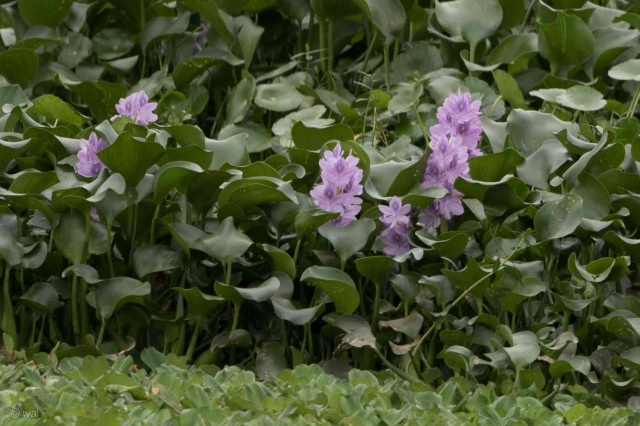 Along the canal we found lots of water hyacinth.  Can’t resisit another shot of these beautiful flowers.

I didin’t see Bill take this – but how lovely.  Silhouettes of 4 Glossy Ibis in flight.

Dec.7:  Work for Billy/laundry & cleaning for me.

We got out in the afternoon for a couple of hours, just driving canals nearby.  This Osprey was disturbed by us from its pleasant perch on the roof of a picnic kiosk, landing on the ground, looking put-out.

Dec. 9:  On to Miami!  First morning it’s been sunny when we got up – what the…???  we have to travel!  Oh well, nothing to be done.  The woman doing laundry  with me the other day (who has been coming here for 12 yeaars), said she’s never seen a wetter or hotter Nov/Dec.   Just our luck!

So we’re in Miami (well, a suburb on the south end near Cutler Bay), less than an hour’s drive from the Everglades National Park.

Dec. 10:  Off to the Florida Everglades!  I wasn’t sure what to expect, but it was indeed very wet & flat.  There is only 1 road into it which cuts through & has several hiking trails branching off which are all paved & usually only about a half-mile loop.  A few are longer.  Small outcrops of trees throughout, with some elevations reaching 4 feet! 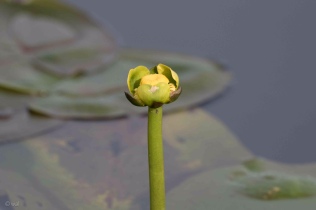 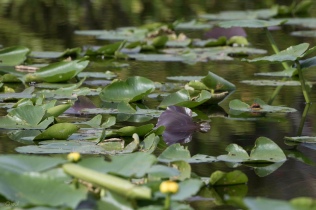 The 1st stop – Anhinga Amble trail, demonstrated what non-threatening humans can experience amongst wild animals.  We could walk to wihin 1 foot of these birds (& gators).

Here are the famous Anhingas from the trail name. 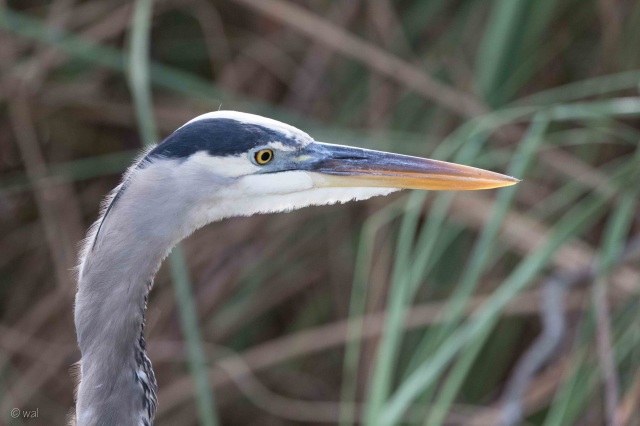 A look in the eye of a Great Blue Heron… 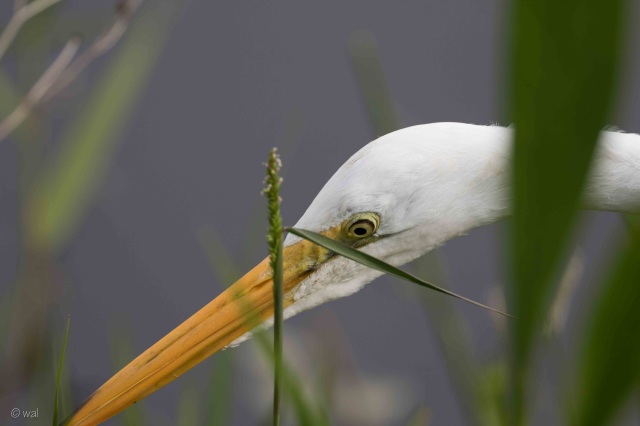 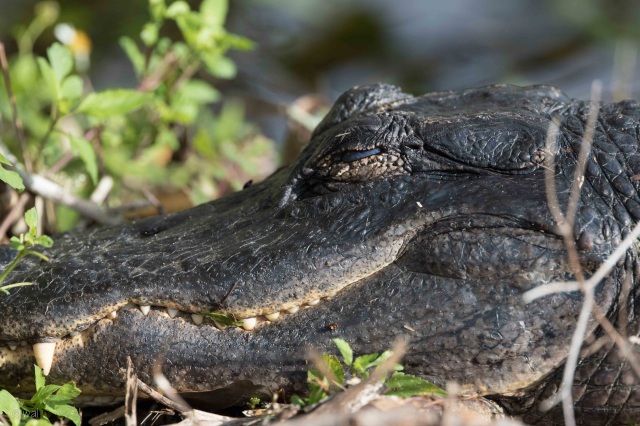 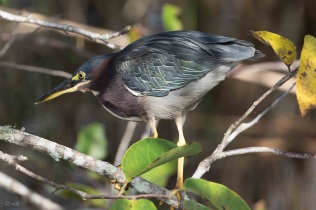 A couple of feet away, a Green Heron… 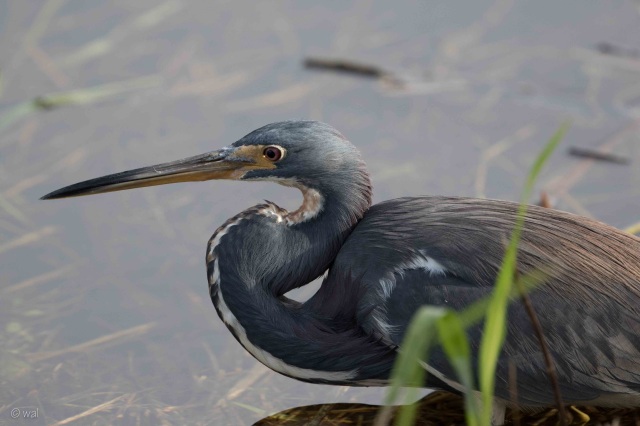 and a Tri-colored Heron. 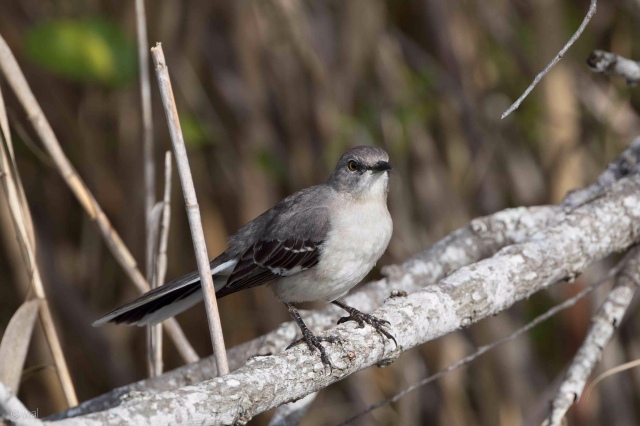 Our old friend the  Northern Mockingbird.

There were lots of epiphytes growing on the trees amongst the bogs.  Spotted a White-eyed Vireo, but it didn’t stay for a photo.

On our way back to the visitor center a gator was swimming in the large pond.

We also took another 1/2 mile loop  called “Gumbo Limbo”.  All it reminded me of (& you SK folks know what I mean) was being stuck in the muck, bent over backwards, trying to get under a limbo stick!  Ha!  I guess they have a different type of gumbo down here! 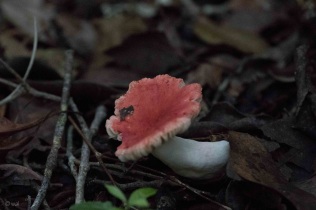 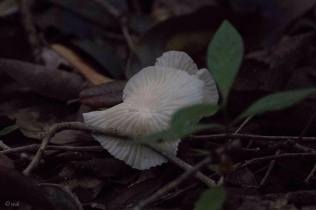 Nary a bird to be heard or seen, but a couple of attractive fungi. 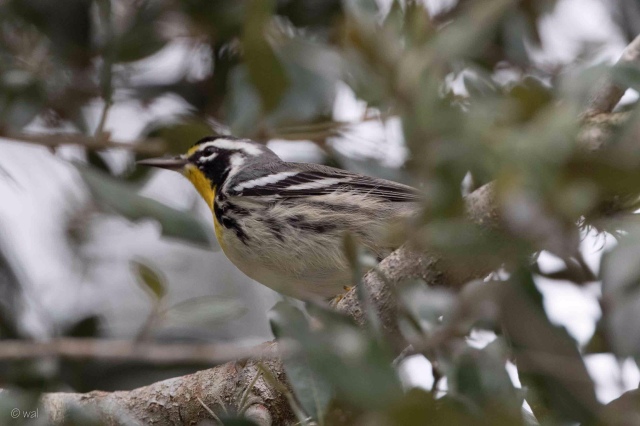 At the parking area we spied a bird high in a large tree – finally got a shot – Yellow-throated Warbler.  Can never have enough photos of him!

Found a juvenile Red-shouldered Hawk, along with a lovely adult (bottom L).

We see lots of the Red-bellied Woodpecker.  I was reading someone else’s blog & they were complaining that “that woodpecker doesn’t have a red belly!”  However, it actually has, but it’s difficult to see since it is mostly perched with its belly facing the tree – & another woodpecker is the red-headed. 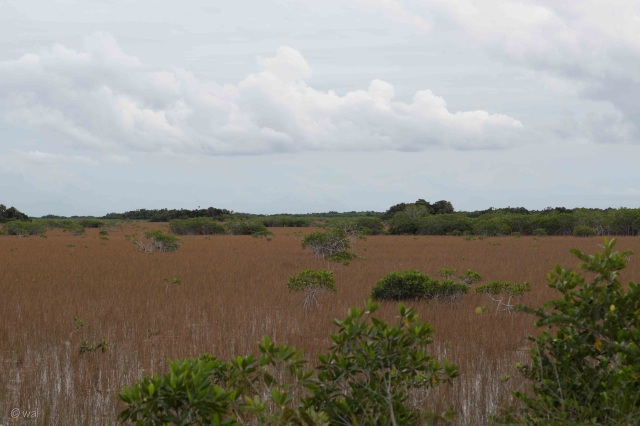 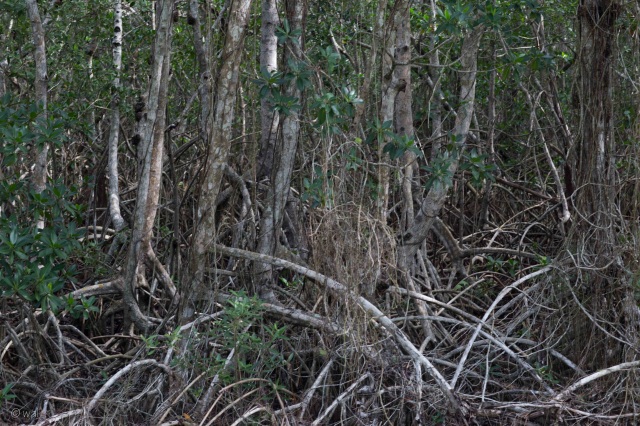 A couple of shots of terrain in the everglades.  First an open grassland, though it is covered in water.  Second the mangroves. 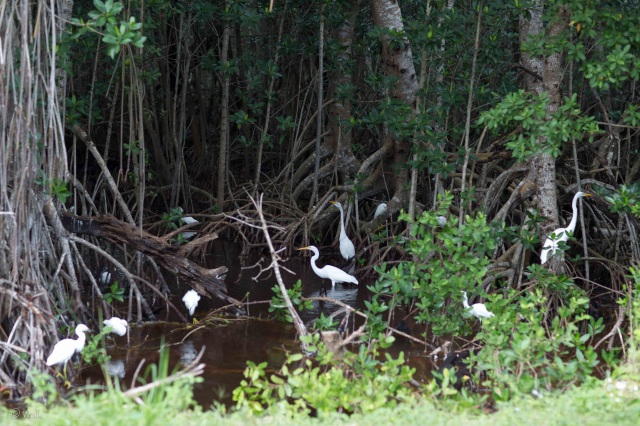 In this little opening from the road we saw a group of Great & Snowy Egrets feeding busily. 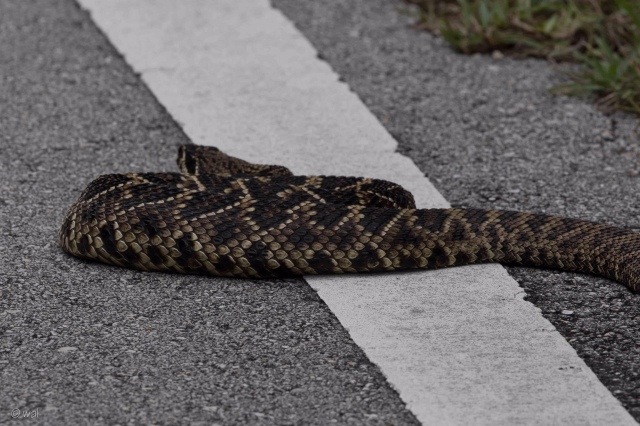 I haven’t seen (nor photographed) but 1 other rattlesnake.  Here is one on the side of the road.  It was brought to our attention by a motorist going the other way.  It was very much alive, though Bill didn’t get very close.  He tried to scare it off the road by honking on the way by, but it didn’t move.  It’s tongue just flicked in & out of its mouth!

Enough for now.  Later you all!