Lifer Woodpecker – but not the one we expected!

Posted on February 4, 2016 by birderspost

Jan. 27, 28:  We moved to our new location about 4 hours north of Ft. Myers, near Crystal River.  The following day it rained, so we caught up with laundry & stayed in.

Jan. 29:  The quest for the Red-cockaded Woodpecker continues.  There is a forest nearby which has lots of ringed trees, so we headed out this morning.  A beautiful sunny day, though it was cool this morning (5C) – high today 17C.

We stopped & looked for several hours, but did not find our target.  HOWEVER, we did find another Lifer & it was a woodpecker!  Red-headed Woodpecker!  No photo could be taken, since it flew from tree to tree & we couldn’t find where it stopped each time.  Nonetheless, it is a spectacular looking bird. 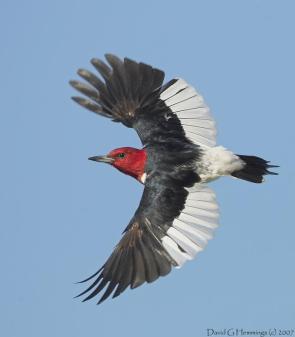 I’ve included photos from the web just to show you.  When in flight, the markings are beautiful also.

Now I have to say, one of our SK birding buds (Marg of ‘Moe & Marg’ who own the cabin at Waskesiu) spotted this beauty in another of our birding bud’s back yard (Don in Broadview).  So needless to say, none of them will be impressed with this sighting. Especially since we didn’t even get a photo – had to use “cheat” photos.  So sad, so embarrassing.

The only other birds we saw were many flocks of Pine Warblers, with an occasional Eastern Bluebird, Ruby-crowned Kinglet, Bluejay, Fish Crow & Amer. Kestrel.

This long-needled pine woodland is “managed” (as are most of the woodland areas in Florida – perhaps in many states).  They cut trees down to use as wood, burn the lower canopy in scheduled & controlled burnings to clear lower brush story.  They also note significant wildlife – like marking bands on trees used by the woodpecker.  This is a field of seedlings planted in 2010.  They sorts of tickled Bill.

Hard to get a shot of its head, but I think it has such cute ears.  It was so busy hunting for food, with head to the ground it hardly noticed Bill or heard his softly crunching steps.  Yay!

This fungus looked like orange peppers growing the ground, but is called orange peel fungus.

There are huge oak trees hung with Spanish moss – so beautiful.  Interspersed with a few tall long-needled pines as well as the usual variety of palms.  However, the left photo was a farm field nearby our RV park which we’ve admired as we drove past every time.  Finally stopped for a photo – like a cathedral.

There were tons of Yellow-rumpled Warblers around, along with the odd Ruby-crowned Kinglet -as well as the first chickadee we’ve seen in awhile – Carolina.  So cute with its head turned right around to the back in 1st photo – then taking off.

The usual Red-shouldered Hawk surprised Bill low in a tree – just above his head.  Finally tracked him down when he rested on a snag nearby.  I think there hasn’t been a day when we haven’t seen one somewhere on our walk.

As usual, there are always some flowers blooming.

Jan. 31:  Today is Aunty Jo’s 90th birthday.  She is the last living Bleakley sibling.  I don’t know how old she was when this was taken, but what a babe!  And not just beautiful, but smart as well!  We love you Aunty Jo & hope you maybe have some birthday cake on your day & a few kisses & hugs – we send ours to you!

We stayed home today to watch the men’s final of the Australian Open Tennis – since we’ve lost our satellite-finding mechanism & now have to rely on local cable.  We missed the ladies’ match but are sad Serena lost – we are big fans.

In the afternoon we walked around the RV park but didn’t say anything new – a few Amer. Goldfinches, a Bluejay &heard a Fish Crow.

Through the usual habitat of pine forest, hanging oaks/beaches & lots of humidity.  Bracket fungus are everywhere – all different kinds – but these large white ones were particularly pretty. 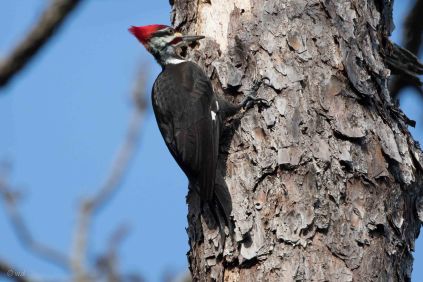 We saw 4 different woodpeckers – none of them our target species (though now it’s expanded from Red-cockaded to Ted-headed also!).  Here are Pileated, Hairy & Red-bellied.

This Black-and-white Warbler was one of about 5 species of other birds seen – none of them new.  The day was calm & warm – with a high of about 26C.  Such a pleasant day. 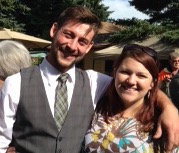 Here is the handsome fellow with his long-time girlfriend, the beautiful Erin.  He is not my true nephew, but I feel like all the Usher cousins’ kids are nieces & nephews.  What with my being named for their Grandmother who died so young – Lois Usher.  I love them like mine anyway & that’s what counts.

We headed off to the Homosasso Springs State Park to hopefully see Manatees.  I’ve been trying every place I could, but this apparently should be successful.  Yep it was! 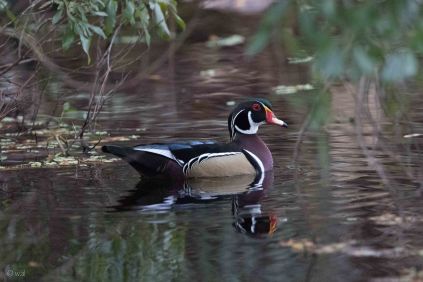 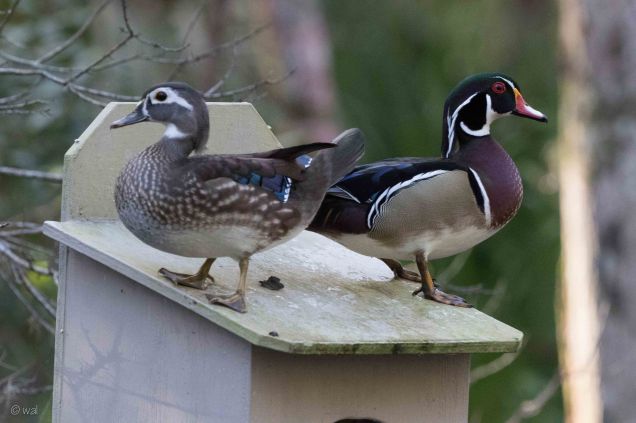 We had a lovely boat ride down the Pepper Creek, adding this new bird to our list:  Wood Duck.  They have erected 10 or so nest boxes along the water & one pair has certainly taken to it! 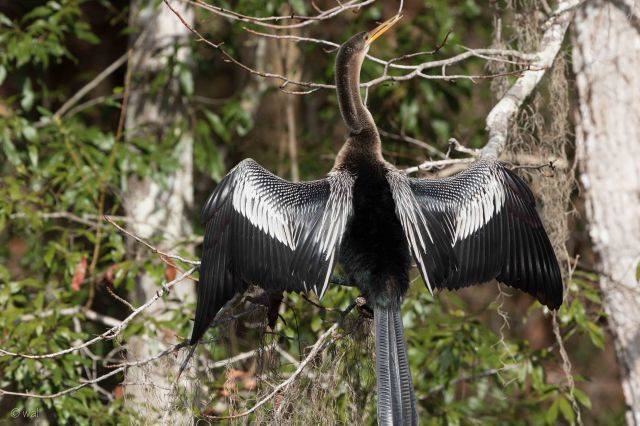 There always seems to be an Anginga every time we’re near water.

Some early blooming azaleas glowed on the shady banks.  Below is one of my goals for the trip. 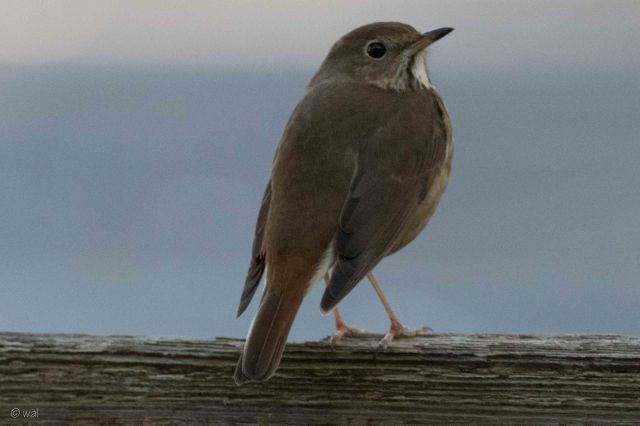 When we got to shore from our boat ride this Hermit Thrush was sitting on the fence (never did decide which way to go). 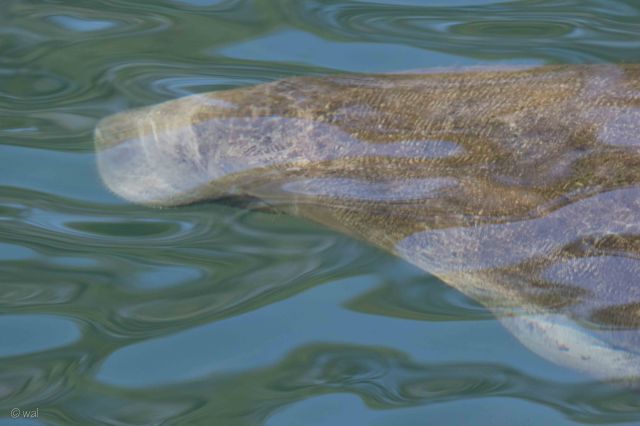 Wild manatees were at last seen; 8-10 we think.  The adults are about 10 feet long & rotund!  The cutest faces, I think.  Some people are snorkelling & kayaking with the manatees.  They come to these waters in the winter because of the warm springs.  The Gulf of Mexico gets cooler in winter & even though manatees are warm-blooded, they need warmer temperatures, so there is a large migration. 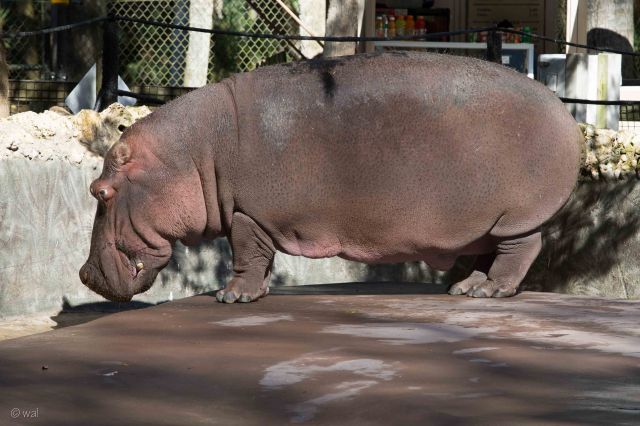 There is another very large mammal here:  Lou, the 6000 pound hippo.  There used to be an animal adventure park here – but it was disbanded long ago.  However, Lou had lived there so long (& was used in a Hollywood movie at one point) so the Governor of FL made him an honorary citizen of the state & he is allowed to stay.  Only native species are allowed here! 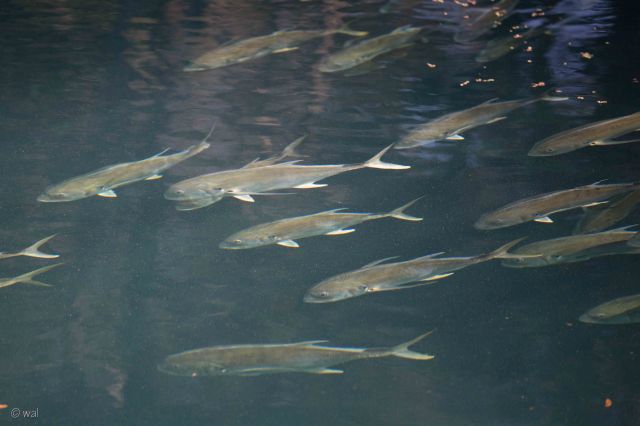 We thought there may have been manatees in the underwater observatory, but just fish.  Aren’t these beautiful with their white-tipped fins & tails.  There were many different kinds, but hard to photograph.

We also came into one of the most diverse flocks of migrant birds we’ve found, adding 1 new species to our list – American Redstart.  It was pretty shady under the canopy, but a record shot.

At last – American Flamingoes.  I’ll never forget my first flamingo in the south of France, cycling with Fred & Deb right on the Mediterranean. 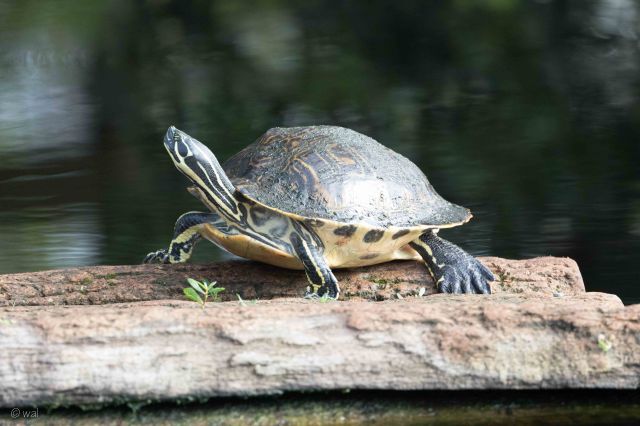 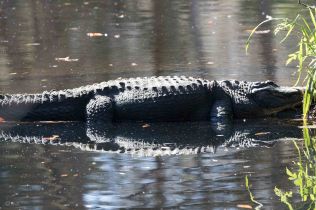 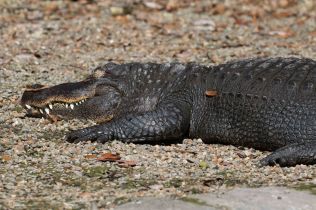 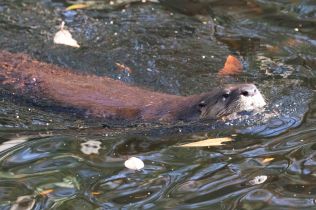 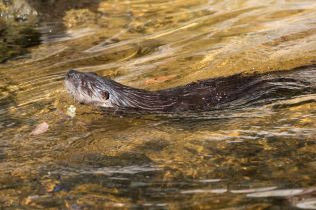 River Otters (always so much fun to watch).  Hopefully they don’t get near the above! 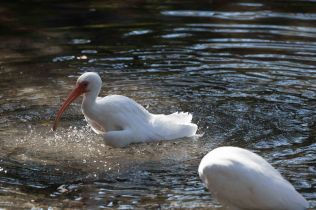 A White Ibis taking a bath (& everyone should know by now it’s one of my favourite activities to watch). 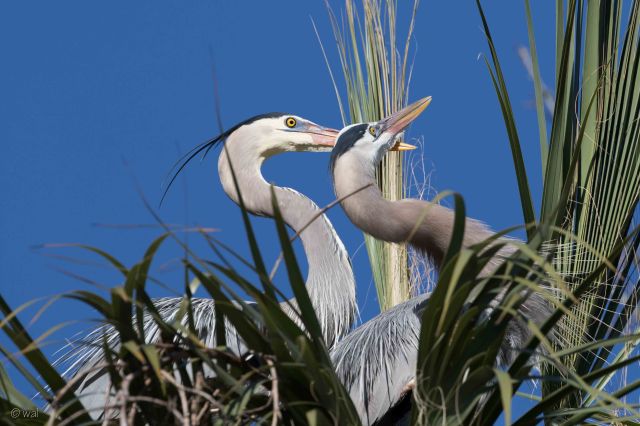 There is a Great Blue Heron colony here, & I spotted a couple mating!!

There is also an area for birds & animals that have been injured in some way, so that they can live out their lives safely. 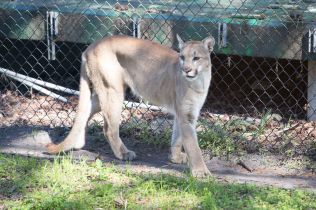 Black bear & Florida panther.  This panther is a sub-species of our mountain lion/cougar.  It is smaller (males get to 160 lbs as compared to the Rocky Mtn sub-species which can get up to 220 lbs) & extremely endangered.  They believe there were only about 20 individuals left in the 1970’s – at last count in 2013, there were about 130.  It has been adopted as the state animal. 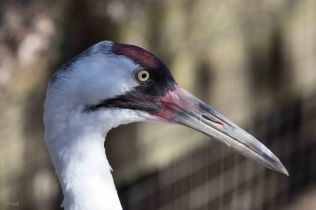 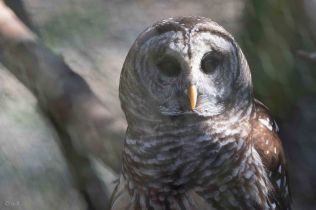 Lastly this beautiful Bald Eagle.  Now on to the Florida panhandle.