Birding, a wedding in MT, visitors & our house/yard…

(I decided I’d better post this as it’s gone on far too long to wait for the final, final house photos!)

Our Supreme Primo had his 76th Birthday on Mar. 24th:  I am no longer going to print photos of all the birthdays, but couldn’t resist one last one of our ultimate guru:

We went birding for the first time on the prairies for at least 9 years on Friday, March 24.  It was a beautiful spring day & with the help of our birding bud, Ron, from S’toon & the guy from the liquor store, we went to Frenchman’s Valley, south of Cypress Lake (which is south of Cypress Hills Park) to see our first Tundra Swans of the season.  Hundreds of Canada Geese winging their way north & my cousin Karen reported Sandhill Cranes flying over her place (near Hazlet) on Tuesday!  Lots of open water to attract Mallards, Common Goldeneye, Canvassback, Redhead, Amer. Widgeon, Common & Red-breasted Mergansers, Ring-billed & Calif. Gulls. 4 Gr. Blue Herons were standing on nests on their heronry at Harris Reservoir – as well as a few geese trying to claim the remainder. This heronry looks like it’s deteriorating with old, dead trees getting close to falling over.

Also observed a Bald Eagle sitting on a telephone post north of the Hills, along with most of the hawks: Rough-legged, Red-tailed (including 1 dark-phase), Swainson’s then m&f N. Harriers courting. A Kestrel just as we got back to town. Quite a few Starlings around & 3 Chipping Sparrows at 1st place. Lots of Horned Larks everywhere & 2 Western Meadowlarks – the 1st was singing (yay!). A couple of Mtn. Bluebirds only.  We brought a couple of bluebird houses (made by my brother, David) to put up near our cousin’s land near Cypress Hills, but his road was still frozen so we’ll wait a few days. In the park a large noisy flock of Pine Siskins with some B-c Chickadees, Downy Woodpecker & Red-br. Nuthatch.  What fun it was!

On March 29th we had to go into the Hat to pick up some pictures.  We drove down to Wilf’s land at Cypress Hills first to see if we could get in on his road now (melted enough!) to put up our bluebird houses!  Answer:  Yes!  These are the 2 houses made by David! 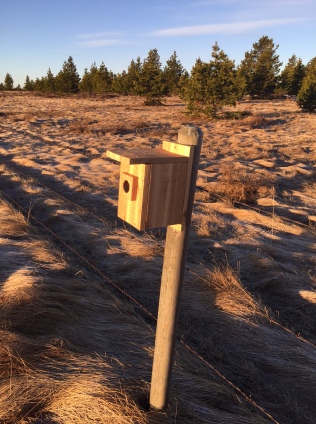 Then on March 30th we headed for Missoula, MT for a wedding.  Like Robyn & Arnie they got married on April Fool’s day!  It was such a beautiful day in Missoula with almost no wind, we had the ceremony OUTSIDE (temp around 15 C).  First of the daffodils blooming!

Hollin & Grleg had a baby together a year ago last Sept.  This is one of the sisters who was pregnant at the same time & we attended their joint baby shower.  Of course the other sister was there with her husband & baby also!  Here’s a “before shot” of the 2 betrothed: 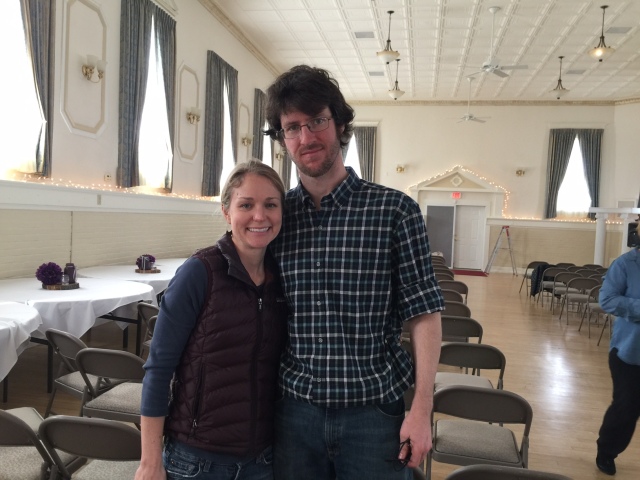 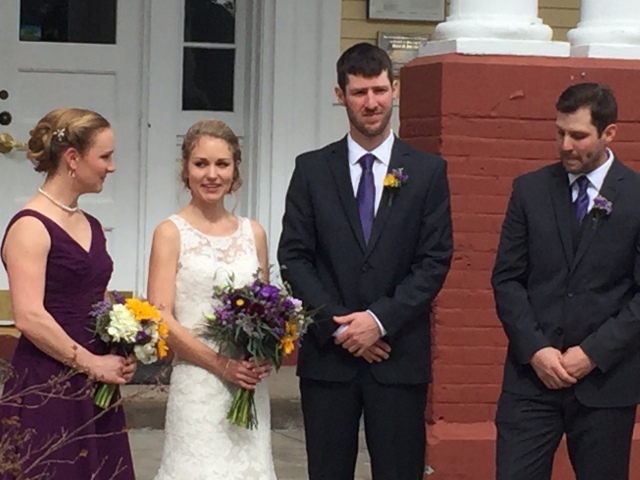 It was a very cute wedding with those 2 little tots.  The bride & groom’s little girl (Adelyn) being held by her Uncle. 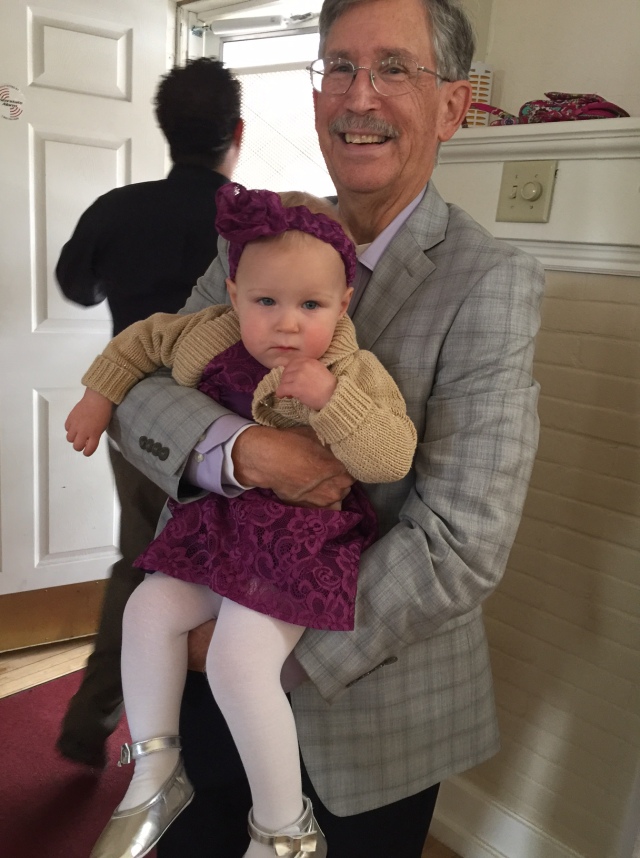 Talk about a couple of cuties!  I took a photo of Bill & his cousin Dana before we left the house for the wedding – all dolled up!

They were so good besides so cute!  Lou Ann & Jimmy sat together (brother & sister) – perfect opportunity to get a shot of them. 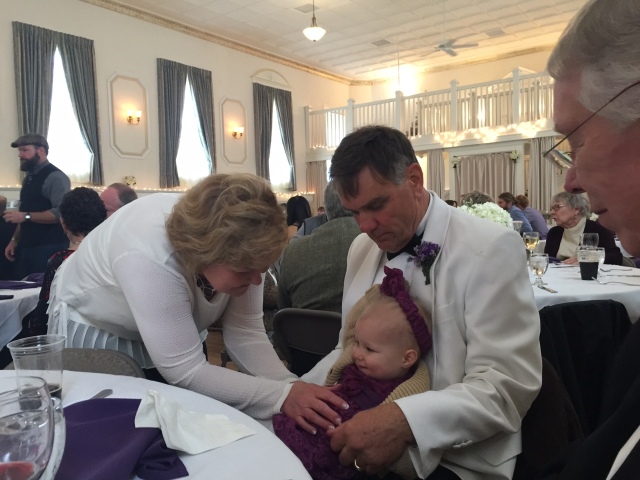 Here are Bill & Lou-Ann watching the decorating of the hall . 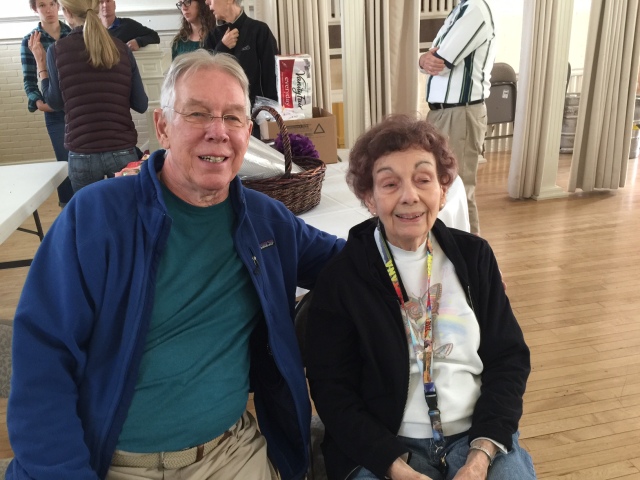 We visited Lou-Ann’s new apartment which is lovely.  Hopefully she will adapt to her new environment – a difficult thing to move at age 87!

Soon after we got back, we had Penny & Wilf over for dinner – they had just returned from their winter sojourn to Phoenix.  What a great looking couple eh?

Not long after this, our builder returned from the south & we began to build what we have now come to call “the great wall of China”.  This is the fence between the messy neighbours & ourselves.  Seems it has been much admired since it was put up! 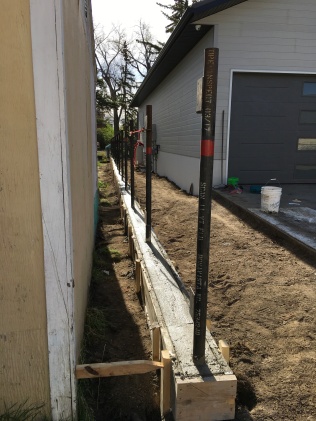 Next came Mother’s Day & a trip to Calgary to watch Stars on Ice.  The wonderful Usher cousins (including Arnie) treated Mom to brunch at their place in Cochrane while we attended the skating.  But the next day we returned to Maple Ck w/ Mom who stayed for a week.    I had my first bouquet of my very own lilacs!

Actually I put them all over the house while Mom visited: kitchen, dining roon, piano, our bedrom, powder room, Mom’s room in the basement. 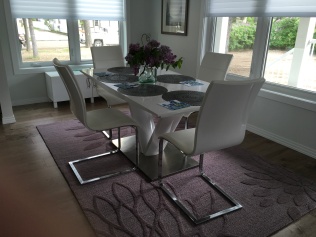 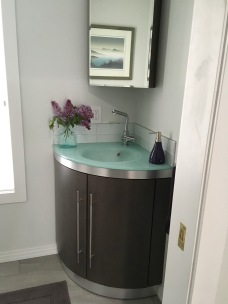 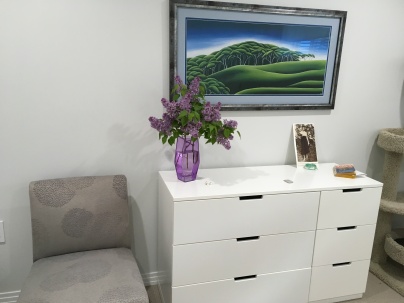 We made a short trip out to Wilf’s land to put up our last 4 bluebird houses & found some prairie wildflowers still in bloom!  They were long finished on the prairies (crocus & shooting star). 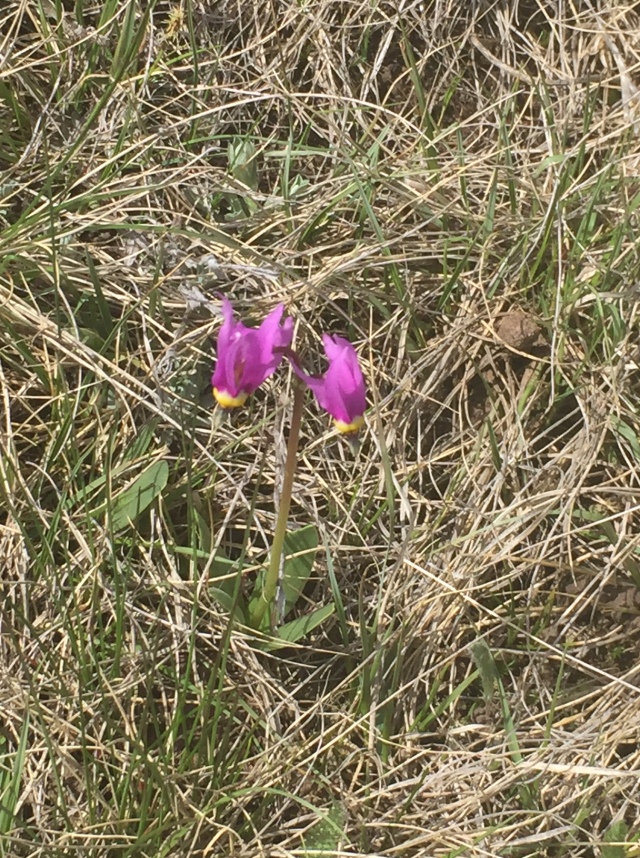 About the same time we received a couple of photos from our friend Don which I’m sure you’ll enjoy.  A female White-=winged Cross bill (do you see whyit it has this name)?

And an unusual pale Canada Goose.

The landscaping was taking place while Mom was here, though she didn’t see much progress.  It will take several weeks.  We received 2 large loads of good qualicy loam (I mean, they were huge trucks!).  One in the back, the other at the front. 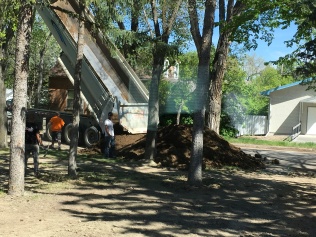 Our landscaping is taking shape.  The beds have been outlined in interlocking dark grey bricks,.  The house is surrounded by white stones outlined with the bricks.  I think it looks very nice.  It is the only really formal looking part.  The rest will be pretty wild – with mostly native plants, lots of berries – all to pomote bees, butterflies & birds.

We had our first “real” visitor – Joe Crichton.  He organized our 1st trip to Costa Rica where we met our SK birding buddies, with whom we travelled again to Belize & Guatemala.  Joe lives in Nanoose Bay not far from Erling & Ann!  We got out for a bit of birding in the afternoon he arrived, heading for the ranch our builder, Blaine, took us to where there is a great wetland.  They have this beautiful gate at the entrace to this ranch: 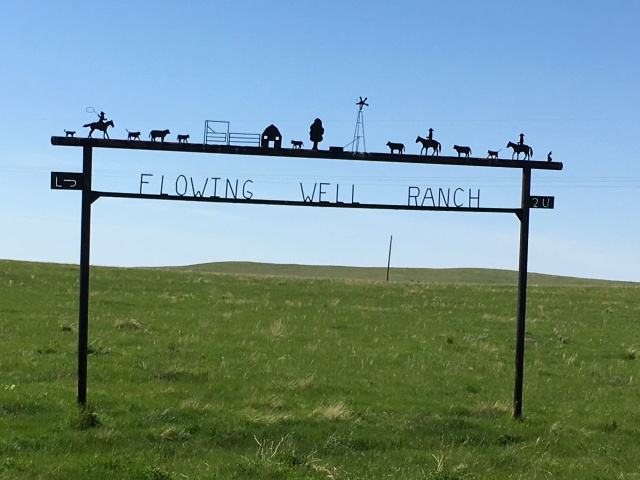 While we were out there we ran into Kevin & his son who had some bird questions for us & as we chatted, we found it it was on THIS RANCH where a beaver took down a power pole & cut power for almost 10 hours from Maple Creek to Gull Lake (& surrounding areas).  It was a Saturday & boy were the stories wild!  Being a Saturday, there were of course, some weddings taking place.  This article appeared in the Maple Creek news – but actually made the internet news on CBC!

Beaver tries to sabotage wedding of Kim and Calum Martin

The recent power outage in the Southwest almost darkened one couple’s wedding day.  Kim and Calum Martin got married at the Resort at Cypress Hills May 27 – the same day a beaver chewed down a power pole between Maple Creek and Gull Lake causing a 10-hour outage for about 2,500 SaskPower customers. The wedding ceremony was just ending as the power went out, according to the Martins. “We actually didn’t know the power went out right away,” Kim Martin said. “The music had quit as we walked out [of the ceremony] and we thought it was just a bit of a glitch.” After the music cut out, they went outside for pictures, which is when they were told there was no power. “At first it was a bit stressful,” Calum Martin said. “But I asked, ‘Is there still food?’ They said, ‘Yep.’ Then I asked, ‘Is there still dancing?’ They said, ‘Yep.’ So I said, ‘We’re OK.’”  The Resort used generators to keep the DJ table playing music and some lamps lit. There were also candles for extra lighting.  Seeing all the hard work the employees of the Resort at Cypress Hills were putting in added to the experience, the Martins said.  “People worked non-stop and everybody did their job so well and made it so it didn’t affect our day. All their hard work meant everything to us. They made everything go so well when it could not have,” Kim Martin said.

When they heard a beaver was responsible for the power outage they couldn’t help but laugh, they said. “We kind of had a hard time believing it was a beaver because that’s the craziest thing we’ve ever heard … It doesn’t sound like something that would happen in real life. But in Canada it can,” Kim Martin said. “I immediately told my family from Scotland and they just lost it. They said, ‘No way, that’s the most Canadian wedding ever,’” Calum Martin added.

A wedding is always a day to remember, but thanks to that beaver this one definitely will be impossible to forget, the Martins said. “It was the most amazing, craziest day ever.”

After we got home & I made dinner for us I took this photo of Joe at our dinner table. 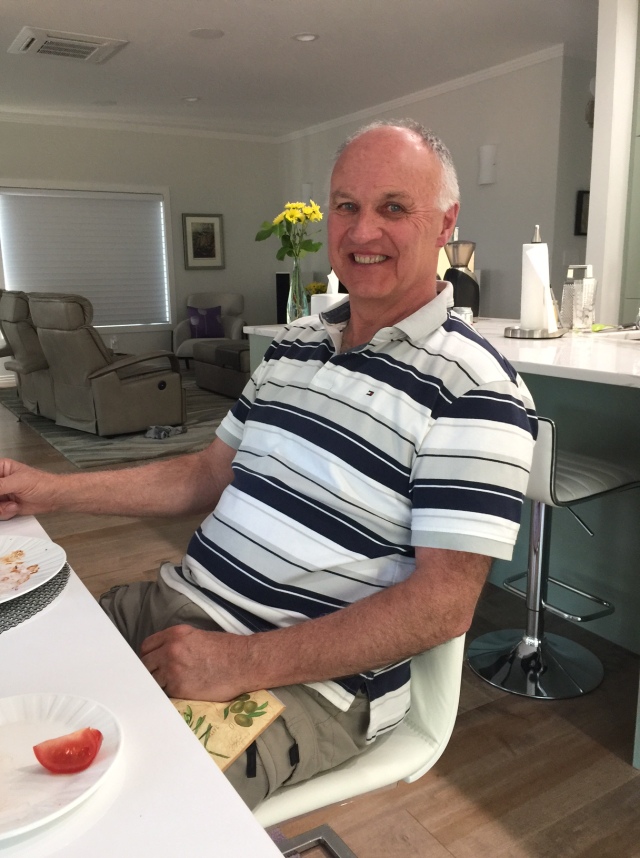 He stayed overnight & left the next day for Grasslands National Park where he was aiming to take some photos.  He had great weather (over 30C & sunny).  He later sent us this iconic prairie photo of a meadowlark singing on a fence post.

Here are a couple of Bill’s photos – first the Upland Sandpiper:

Then a young fox just outside its den: 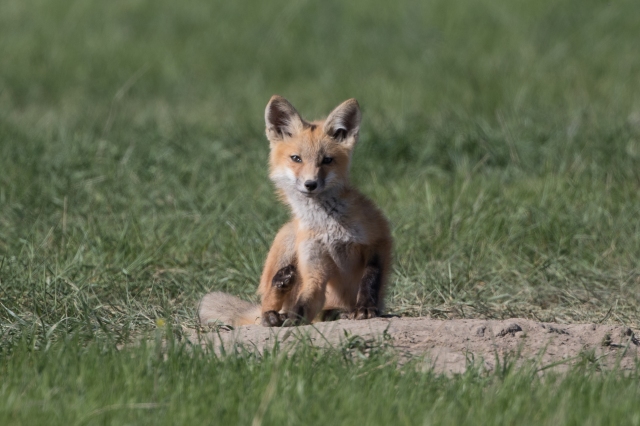 Shortly afterwards, I received this photo from Karen, telling us these young’uns had “flown the coop”.  I had received a couple of photos & videos from Harold as he checked them out from time to time in the nest.

Our landscaper went to Cuba for a wedding, so we had a week’s delay (June 5-9).  But we heard again from our friend Don who sent this beautiful photo of a Common Loon w/ young on its back.  So beautiful w/ the purple & green reflections.

At the same time Joe visited, cousin Jane was out on the coast attending a very special event – the baby shower for Desiree!  She sent along this photo of herself, Des & Jill Usher: 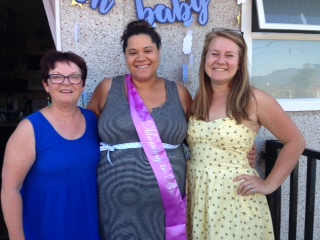 Des looks beautiful eh?  The really exciting thing is that she is being induced on June 21st – which is Jill’s 22nd birthday – & Mom’s 98th birthday!  Not that the baby will come on that day, but we’ll see!

Another friend of ours recedntly sent this photo – of us!  We caught up with her in Calgary at a LivingWorks function.

On June 15-16 we sent to Calgary to pick up a couple of things for the house & had a rather impromptu birthday dinner w/ Mom while we were there.  It just included Brian, Jane & Robyn – but we had a lovely evening.