We’ve had some inclement weather, but did a little shopping (a keyboard for my iPad, which makes emails so much easier) & a few other things.  Great to have the rain – it is so dry here.  Bill also had some work to do also.  When we finally got a break we drove up into Montosa Canyon (on the recommendation of the man from Paton’s bird feeders).  We didn’t find many birds, though we got a couple of new ones for the list, but it was a beautiful drive past the Whipple Observatory. 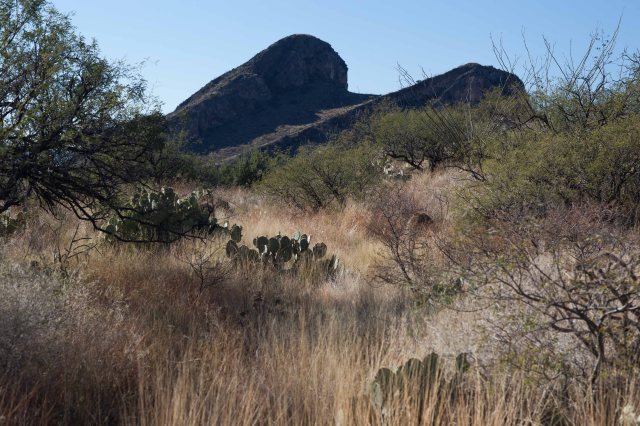 Saturday we drove under the highway to Arivaca & walked the Buenos Aires Conservation area.  On the way we observed a (murder?) group of ravens flying overhead.  We assumed the black thing we saw in the tree as we drove closer, was another, but it was a Crested Caracara!  No photo – driving!  At the park, we were sorely disappointed that all the water is gone!  Even the little pond which held ducks & herons – plus a Green Kingfisher last year – is totally dry.  At least we had a quick look at one of favourites – the Green-tailed Towhee! 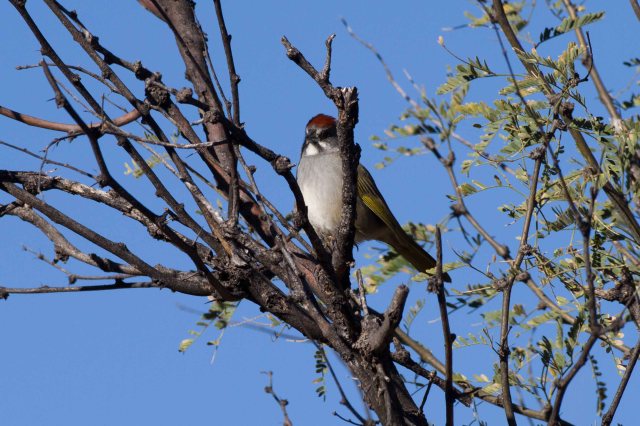 Further along is the headquarters of the park, which “they say” contains 3 different quails, including the elusive Masked Bobwhite – which we didn’t see last year either!  (Correct:  we didn’t see a single one this year either.)  As a matter of fact there wasn’t much bird life at all!  We sat on an overlook having lunch & didn’t see a single bird for an hour!  However, we did see this female N. Harrier perched low for a photo on our way out. 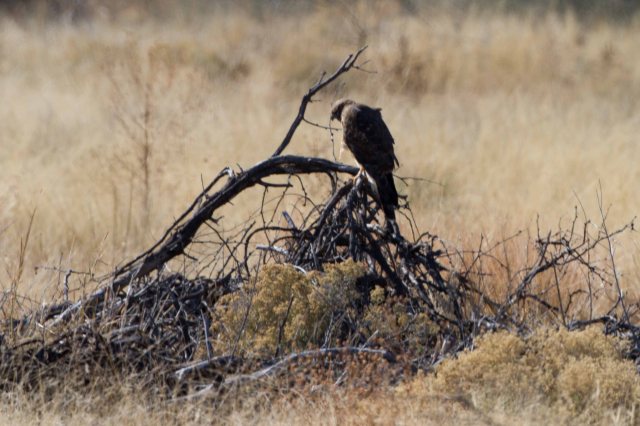 There was also a close view of a very common bird – both here and at home, male House Finch.

There were several Loggerhead Shrikes in the area, but none would cooperate for a photo.  I always think of them as “robbers”, since they have a black mask.  They eat other small birds, lizards & large insects.  We finally got this guy to stay long enough for a quick shot.

On the way out at least we saw a Red-tailed Hawk – which are very common everywhere in AZ (& common at home during the summer).  He really showed off his red tail.

Sunday we drove up to Madera Canyon (not to find the warbler this time).  What a fun day it was!  Lot of birds, including a Wild Turkey displaying!  What the heck is going on here (our friend Moe can vouch for this same display among some Ruffed Grouse at his place in Birch Hills, SK over the course of his Xmas bird count!).  Their iridescent feathers are awfully pretty for such an ugly face!

Especially for Veronica, we include this Mexican Jay.  They congregate in groups & are very noisy (V – is this typical of Mexicans?)

This little Bridled Titmouse flits about so quickly it is very difficult indeed to photograph.  Finally got this one.

A pair of White-breasted Nuthatches took advantage of feeders most of the time we were there.  They are also pretty, noisy birds.

Last year we spent a whole day driving up Mt. Lemmon NE of Tucson to find Yellow-eyed Juncos.  Little did we know they are here also.  Here’s one now!

Last bird before heading for home was an Arizona Woodpecker (female, without red on the head) which we love, being such a rare BROWN woodpecker. 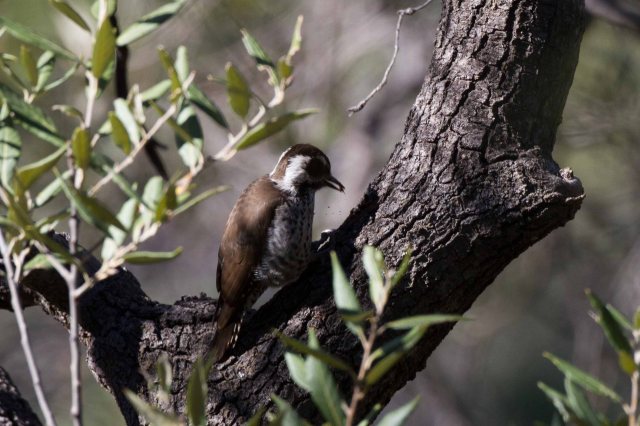 We were thrilled to find the Magnificent Woodpecker again at the feeder up the hill (which our buddy Alex photographed last time).  Not a great shot, but a confirmation for the record, nonetheless (face buried in food!).

Then we spied a Hepatic Tanager – such pretty colouring.  We knew one was “taken” by a Cooper’s Hawk last year, & hoped it wasn’t the only one!

This little House Wren isn’t very special, but is hard to catch in a still moment, small & busy!

Monday we drove back to Patagonia Lake (only a hour from here), to try for the trogon again.  We didn’t see it, but had some other nice views.  This is what the end of the lake looks like where we found the Great Egret. 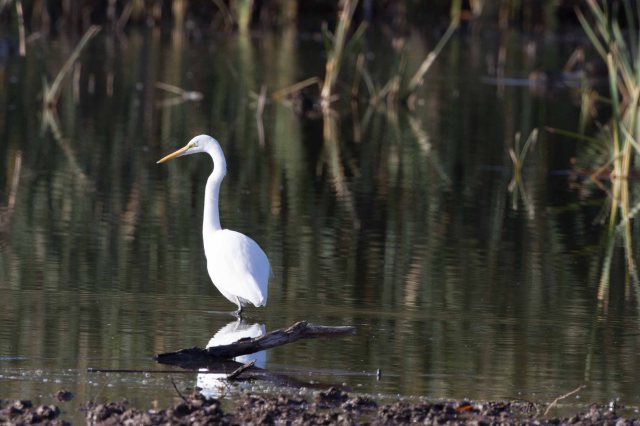 Yesterday Bill took that cute photo of a House Wren (which had stopped long enough to be caught!).  Well, today he got 2 kinds of wrens:  again the House – but also Bewick’s (with the stripe through the eye).  This is a coup because neither of them seem to stop moving! 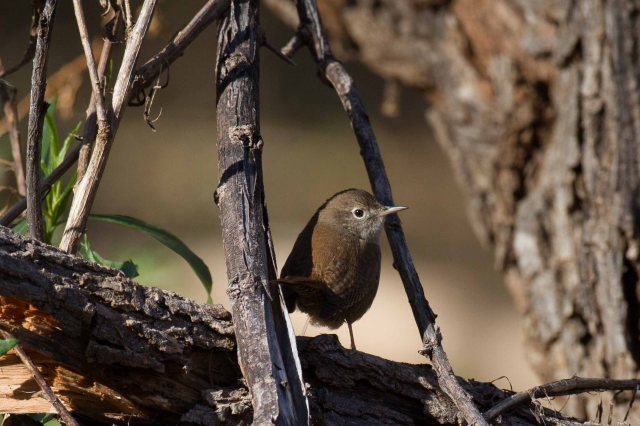 Sitting in almost the same place as last time was the Great Horned Owl, sleeping in his tree. 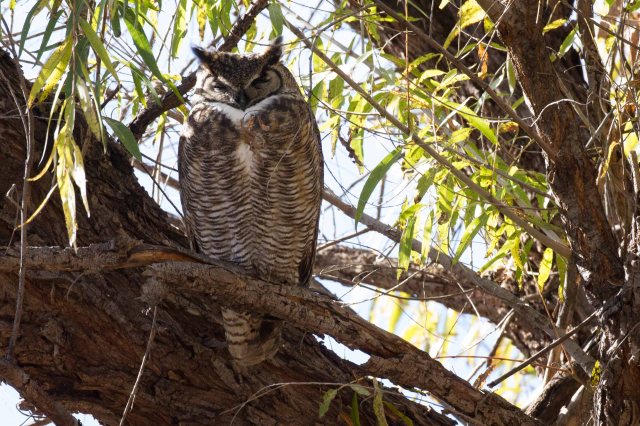 Found a male Ladder-backed Woodpecker who posed for a couple of photos.  The first shows why he has this name – the next shows his front!

Now I had to include a shot taken with my phone – the reason is so everyone can see what Bill totes around in his attempts to get these photos.  The whole rig weighs 12 pounds & even though it is on a strap with padding on the shoulder, after 3 or 4 hours, it seems to weigh 50 pounds!

I am so proud of him because he was even able to get a couple of shots of one of my favourite birds, White-throated Swifts.  Like their name, they are extremely swift & zoom around.  Imagine trying to lift that heavy lens to shoot a moving target like that!  Here are couple he managed somehow to get!  My hero!

High today was about 9 C, but nice and sunny.  What fun!  I think that’s enough for this post for now – lots of photos!

1 Response to Revisiting some old haunts