Wow, it’s been so lovely here this year.  Last year was the coldest winter in 50 years and I’ve overheard locals exclaiming about what a beautiful January it is!  Highs are in the high teens or around 20 – lows around freezing or a bit above.  Perfect!

Okay – a report on the haircuts – SUCCESS!  My hairdresser, Jackie,  said “pick someone with the most experience you can find” and I did (33 yrs).  I can still make a pony tail & she didn’t cut more than 1 1/4″.  Bill’s stylist had 15 yrs. experience and he almost felt like it was done by his Gina at home!  So all good.

Saturday we drove to Ramsey Canyon and took a walk.  It is a very pretty setting along a creek, but quiet for birds now (a bit early in the season for all the hummingbirds which visit in the spring).  I did however, have my first glimpse of a Painted Redstart, but Bill didn’t even get to see it.  I know we’ll find one later to photograph.  The beautiful arbutus trees (I think) along the banks of the stream have such lovely skin!  And cast interesting shadows. 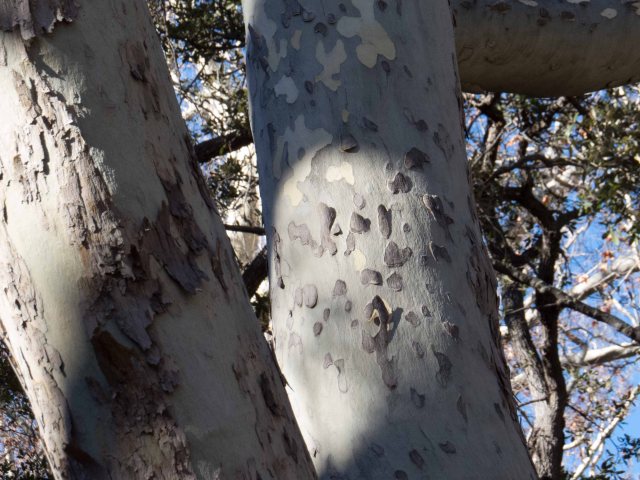 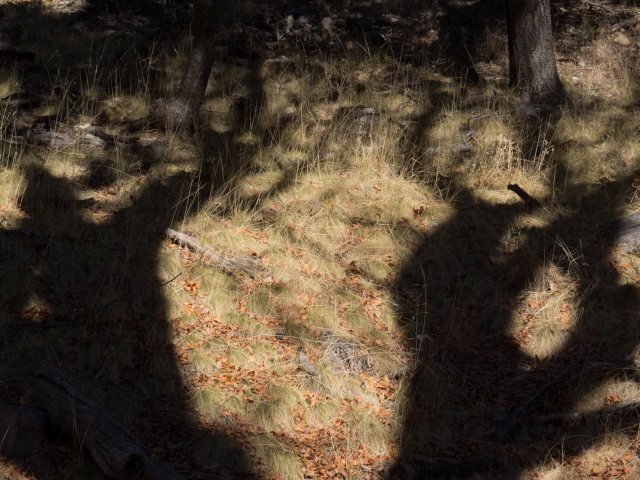 There were lots of deer – including a couple of young bucks.  One 8-pointer (I think)  successfully chased the other away!  Here is a very young buck with only 2 tiny prongs starting to grow – lying down for his photo.  He posed no threat to the other bucks! 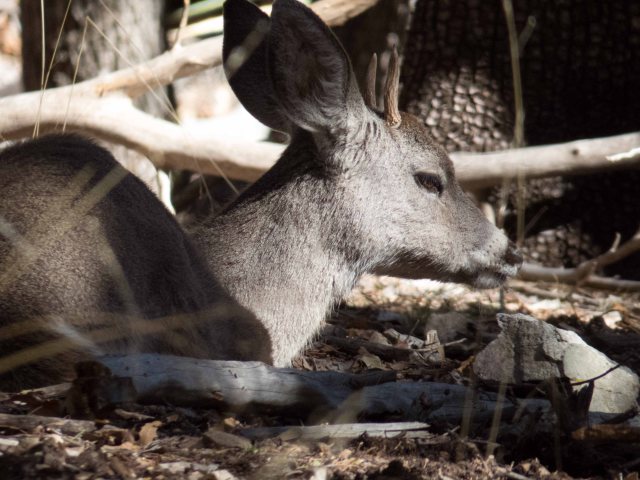 Came across a log at the side of the path which had such an unusual growth on it – looked like an ear! 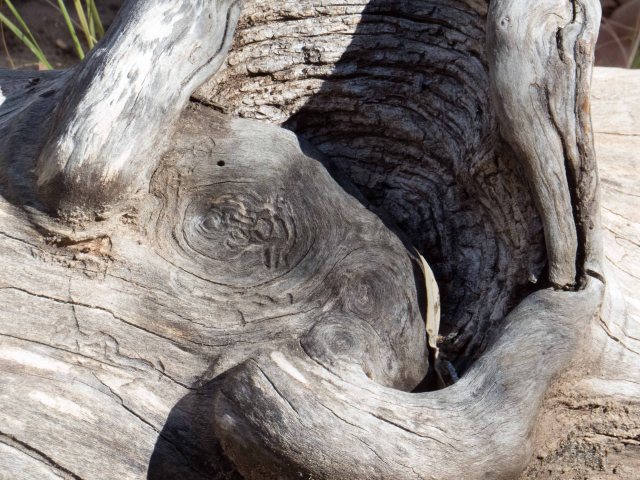 Sunday we took a quick walk around the property and have added a couple of species to add to our total – now 29!  Here are some of the regulars.  The first one seen was a little Anna’s Hummingbird – this just a record shot, facing away from us. 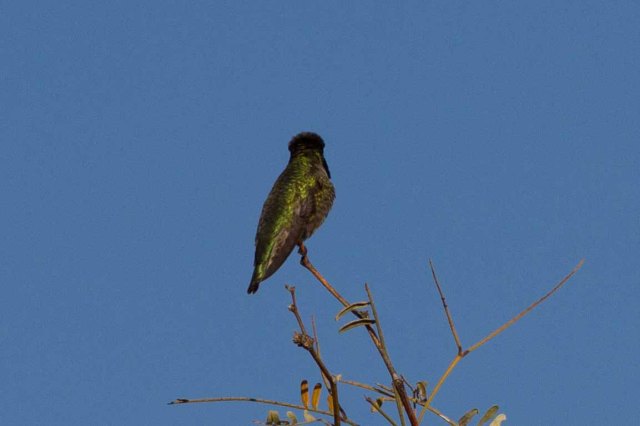 Next our handsome sparrow sitting on a cholla  (Black-throated).

Canyon Towhees are abundant, usually digging on the ground under the scrub.  Found this guy (or gal) out in the open for a minute. 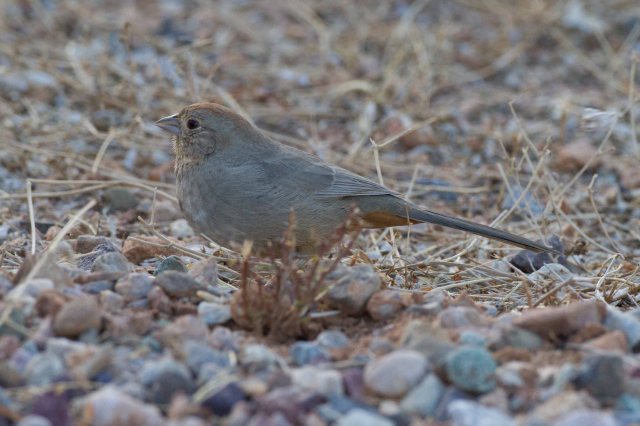 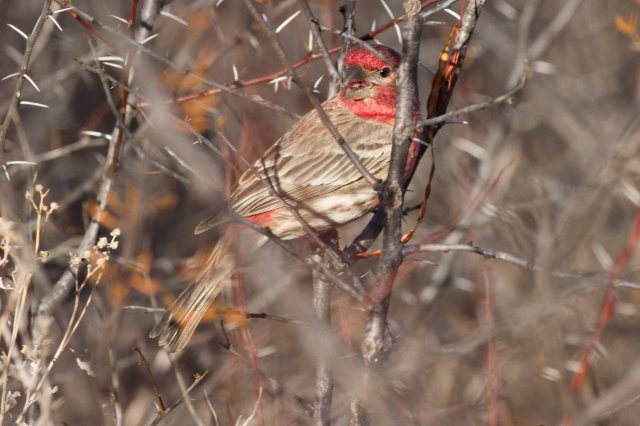 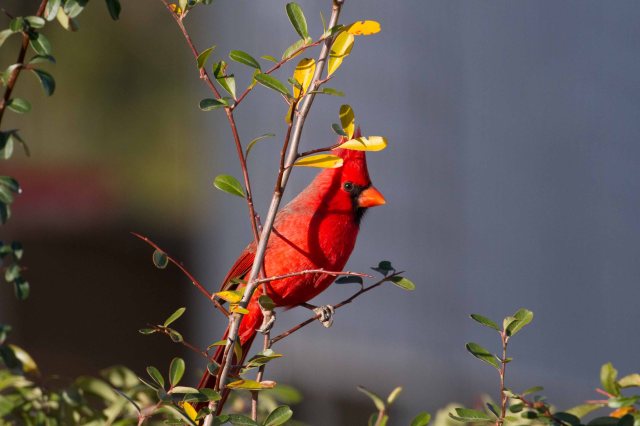 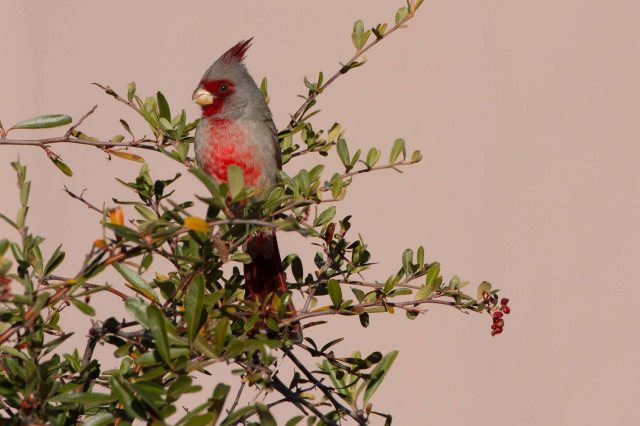 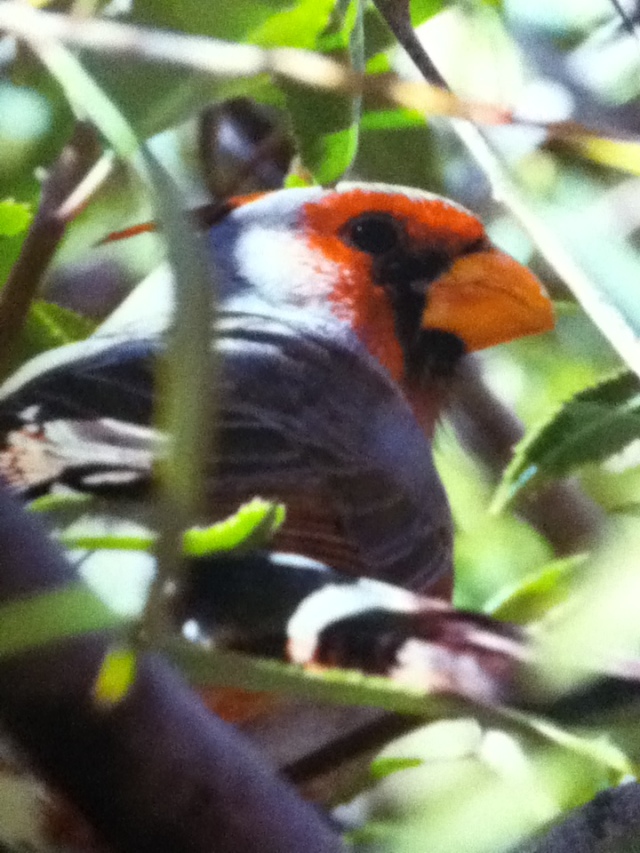 Interestingly, our friend Ron from Saskatoon, sent us a photo of a Cardinal which someone took in AZ, asking what it was.  HA!  It sure did open a can or worms!  What we thought was an easy ID (female  Cardinal), received references to other bird books, etc. to dispute our take.  Just decided to add that photo below the others – whaddya think?  Oh – we birders have so much fun!

A Curve-billed Thrasher sat still while we got closer and closer – hence this lovely photo. 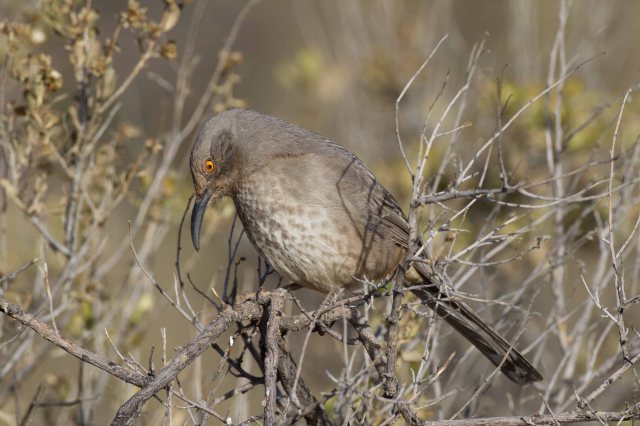 I have been looking for a vireo since we arrived in November – ask Bill – I mention it all the time.  I say “maybe we’ll see a vireo today”!  Of course any vireo would do, but thought it would likely be Hutton’s.  Well, sure enough, finally found one in the tree just as we turned back to the trailer.  A record shot. 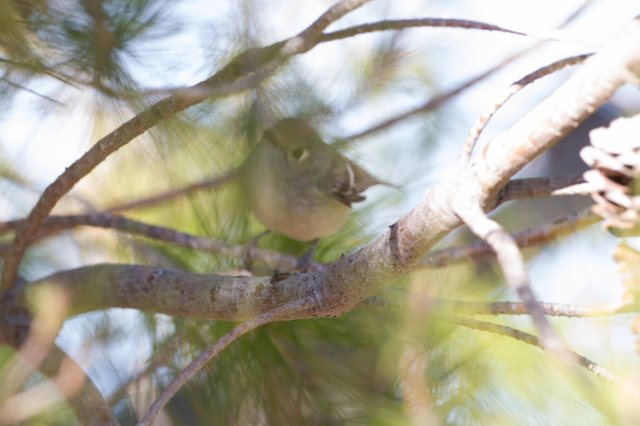 We then headed to Staples to fax a document to Brian in hopes of getting Bill’s smaller-sized lens (so he doesn’t have to carry his big sucker any more!).  Billy then watched football the rest of the day.

Last week we went out to dinner at “Outside Inn” where we enjoyed a delicious meal.  It reminded me of Bill’s new adventure into flavours – blue cheese!  When we were in Amado, we ate at their restaurant a couple of times and the salad bar had a creamy blue cheese dressing which was delicious.  Bill ate it every time and loved it!  When we ate at the Inn, he chose a salad with a vinaigrette which had crumbled blue cheese on top and loved it!  Who knew?  He and brother Brian are known as the fussy eaters in the family, but I think Brian has ventured much further afield in his tastes than Bill at this point.  But we chalk up a point for Billy this time!

Our neighbours in the RV park dropped us a card from Willcox (where we move to at the end of the month) announcing “Wings over Willcox” – a bird festival Jan. 15-18.  Written on the back was “Whitewater Draw” and “Sandhill Cranes”.  We went there last year, but the water was so low, we thought it would eventually dry up and threaten the wintering grounds of the cranes and geese.  Bill wrote an email to AZ Game Fish and Wildlife, asking about the groundwater in the area.  They basically gave him the run-around, passed him from one person to the next, and didn’t say too much.  However, we found the ponds much fuller this year – hooray.

Before we entered the path to Whitewater Draw, we stopped at the farmhouse at the turnoff where we saw Lark Buntings last year – lo and behold!  There they were again!  Sometimes a birder gets lucky like that – it’s what keeps us coming back and back to the same place in hopes of seeing the same thing we saw one other time!

Sandhill Cranes usually winter here by the tens-of-thousands, along with several thousand geese (mostly Snow), some ducks and shorebirds.  The cranes make me think of my friend Ann Gallie who is struggling mightily with cancer right now.  When she visited a few years ago she did a wonderful impression of the call of the cranes.  Their songs filled the air the whole time we were there – it was beautiful!  I think of her whenever I hear them now.  Happily there are so many cranes, we couldn’t see the geese very well.  But we found at least Snow  and Greater White-fronted.  Here are a couple of crane photos. 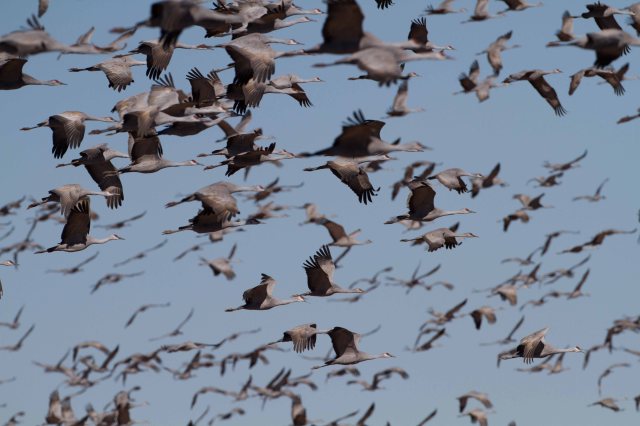 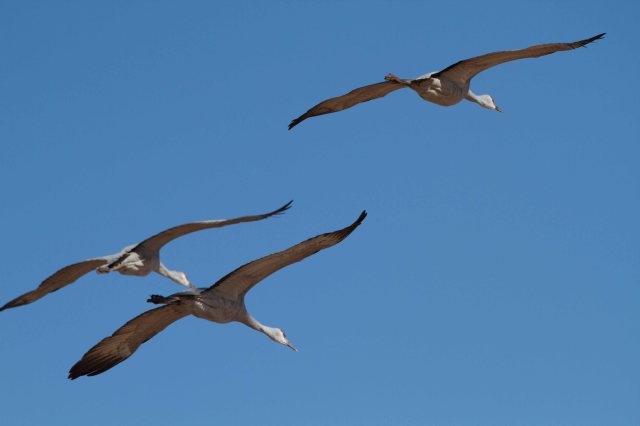 One of our goals was to find the Ruddy Ground Doves which have been reported here.  It is a pretty big place, so not really sure where to look – but instead of Ruddy – we found Common!  We have a suspicion that someone mis-identified them, but don’t know for sure.  Here is a Common Ground Dove. 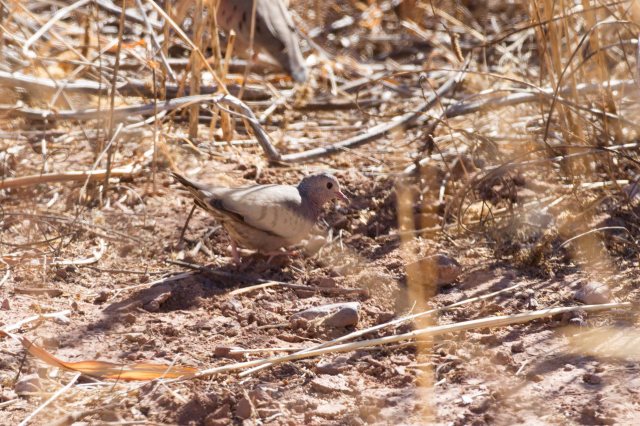 We also added a few shorebirds, including Least Sandpiper and Long-billed Dowichers (as usual they have their ultra-long bills buried out of view). 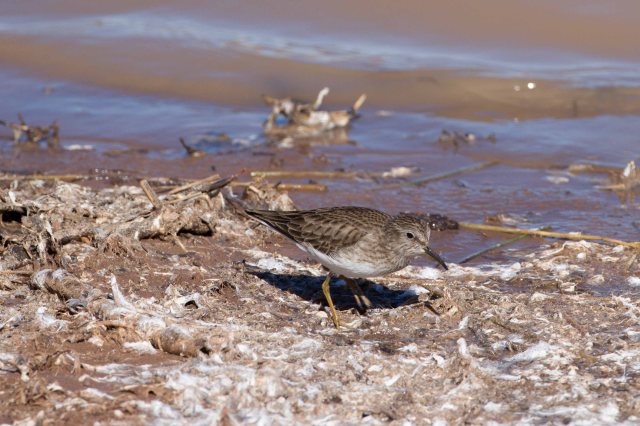 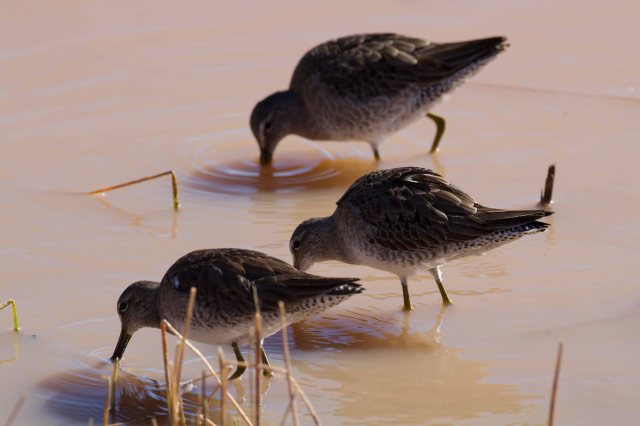 A Red-tailed Hawk thought it was hidden from view – perched high up where it could see prey below. 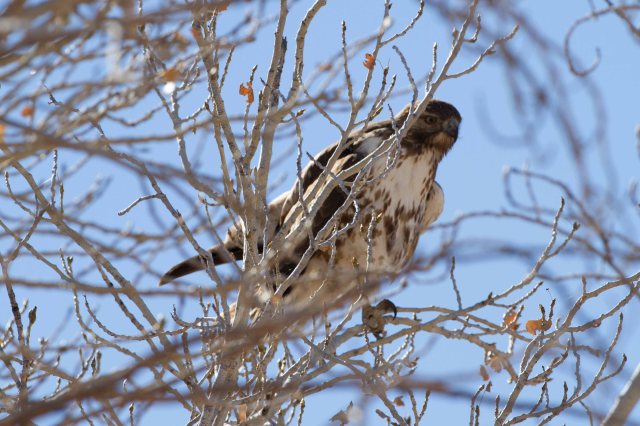 Saw our beautiful Vermillion Flycatcher, but didn’t get a decent photo – but here’s the female. 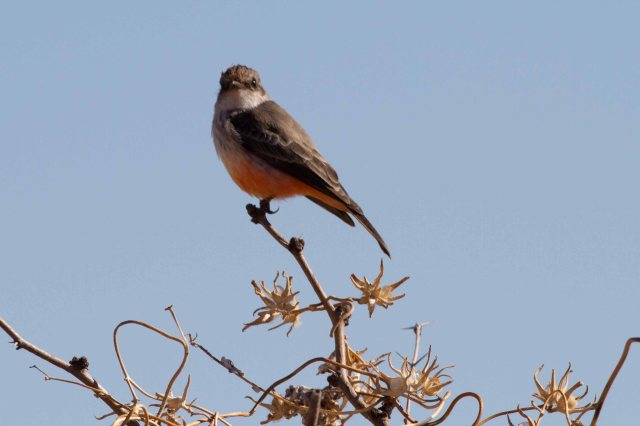 On the way out we got a photo of a Meadowlark.  All we’ve seen so far are Eastern – we hoped for a Western, but no luck.  Here it is, especially for Tarie, although it doesn’t look quite as festive as usual in the spring, without it’s bright yellow breast, nor does it sing the same song! 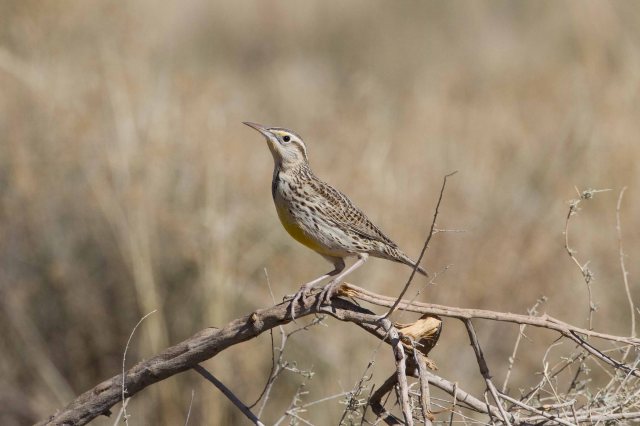 We drove through Bisbee on the way home.  It is the town mentioned in the Joanna Brady mystery series, which I’ve always enjoyed.  J.A. Jance brings southern AZ alive in her descriptions and it’s fun to actually be here in the area.  Bisbee is a very special old town with historical buildings, some are Art Deco.  If Billy wasn’t so sick I think we may have taken a few photos of the town. Poor thing is suffering with a cough which has made his ribs sore. This morning he slept until 10 AM (having gone to bed at 9 PM last night).  He’s back there again right now after lunch.

Our trip to Ramsey Canyon will be delayed, however, I shall post this now.