A whirlwind ride through CO to UT!

We left Socorro NM for Cortez CO on Saturday.  Winds were forecast to be gusting to 56 kph.   Holy Mackerel!  Maybe not a whirlwind – but nearly gale force!  We did not blow off the road, but I pretty much white-knuckled it the whole way.  We passed through a couple of terrible dust storms where we could barely see ahead.  We also endured the attack of the tumbleweeds (some tumble trees as well!!).  Those things can really get stuck up under your vehicle, but we came away with just a few small fragments in the front of the truck.  Interesting topography as we neared the CO state line – some interesting rock formations sticking straight up out of the plains, foreshadowing what lay ahead.  Sometimes they appeared as dark shadows, cloaked by a cloud – then the sun would slowly reveal their crevices.  Would have taken a photo except for not wanting to step out in the roaring gale!  Had to do it once anyway to add fuel to our tank from the spare one – yikes, what an ordeal!  It was a 6 hour drive and I nearly got a headache (which I rarely get)!

The next day in Moab it was nice and mild when we arrived.  Only a 2 hour drive from Cortez, CO.  Winds were calm and it was lovely a huge relief.  Shopped and oriented ourselves – went out to dinner (Fiesta Mexicana) where we ate a few years ago when we stayed here – still good.

Even though it was partly cloudy in the morning, we drove half an hour to Arches National Park.  This is an amazing place.  Many will recognize Delicate Arch from the license place of Utah (first photo). 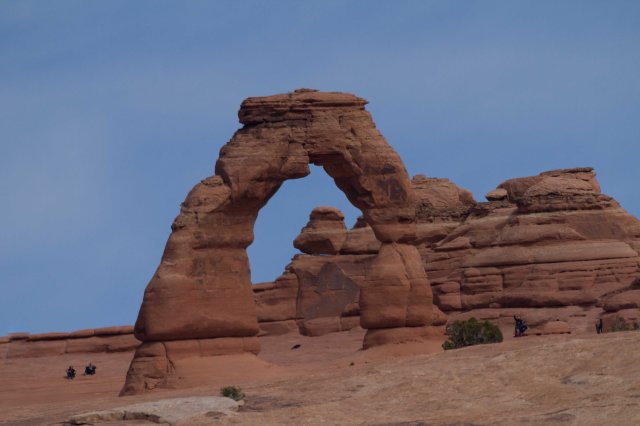 Here’s a photo of a license place too! 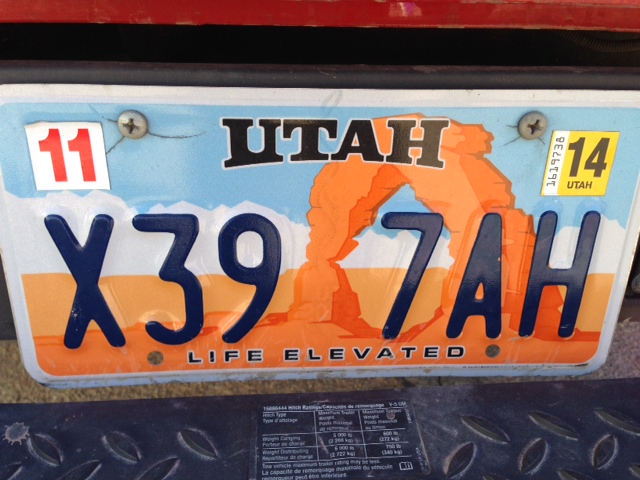 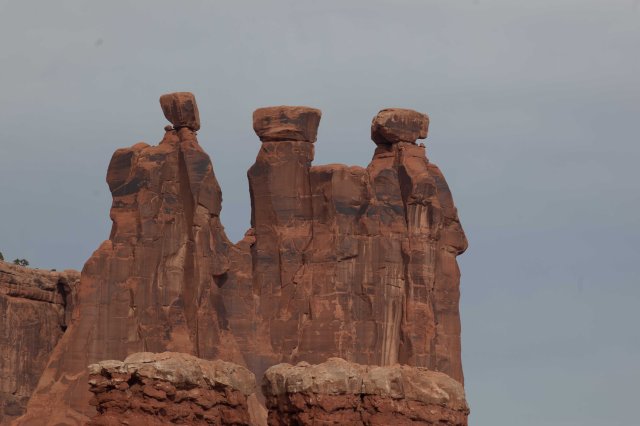 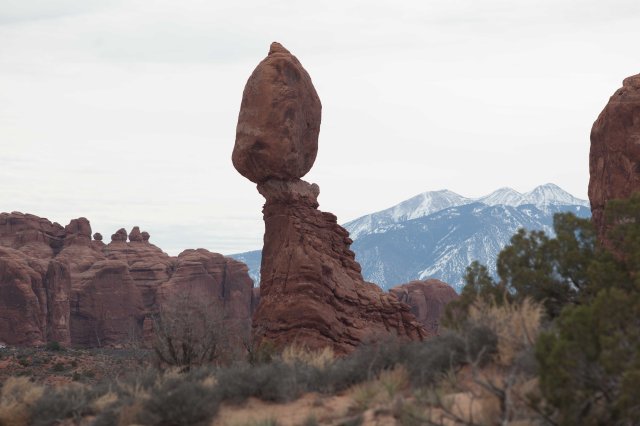 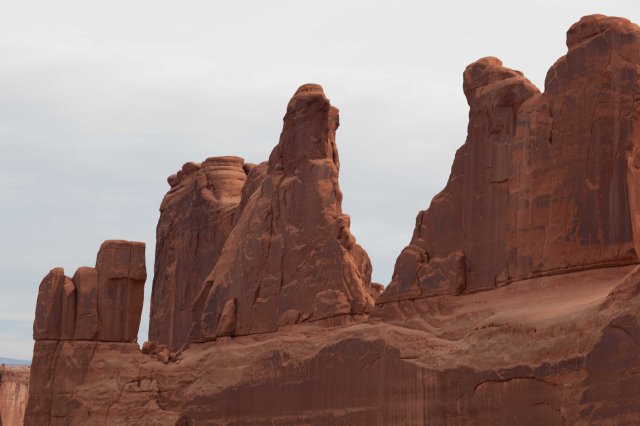 Drove along the Colorado River after lunch then up into the mountains where we viewed Castle Rock.  Some may remember the 1964 Chev commercial with a red cadillac convertible perched on the its top (or not).  It is an impressive sight.  First the close photo, then from high above in the mountains. 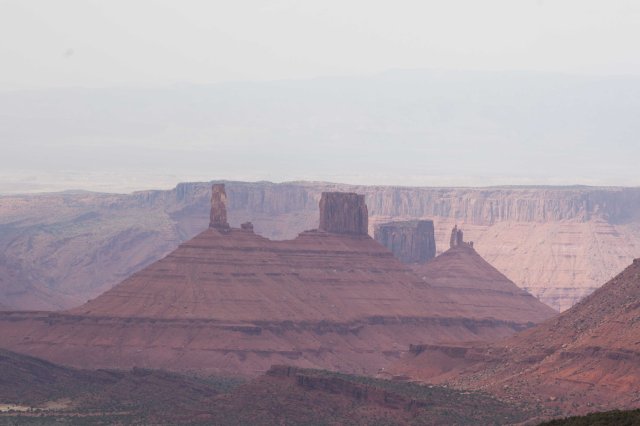 The highway we took ended in gravel and since there was lots of snow around, we turned back.  At 3:30, almost back to the main highway, we saw a bird blow by – Mountain Bluebird!!  Not 5 minutes later we found another blue flock.  First we thought they were Western Scrub Jays – but NO!  Pinyon Jays!  So after not really birding or thinking we’d get any new birds today, we added 2 new ones and our grand total is now 195!  Sorry we couldn’t get any photos.

Tuesday off to Needles overlook.  Along the way we pass beautiful Wilson’s arch right beside the road.

The Needles overlook is somewhat like a mini Grand Canyon and still has the Colorado River running through.  Here are some perspectives. 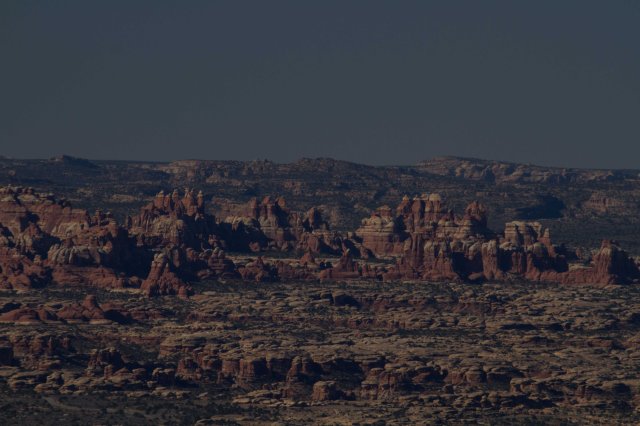 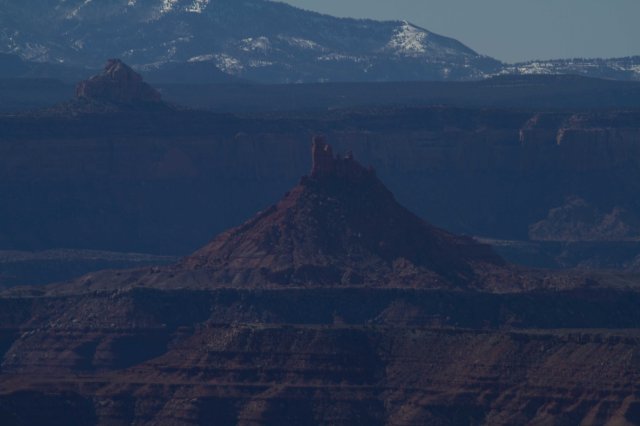 On the way home we saw our first Black-billed Magpie of the year!  I must say (dear brother Brian) we were pretty chuffed about it!

Wednesday we headed off to Arches again.  A sunnier morning, though not very warm (high today was supposed to be 14 – only got to 12 – most of the day around 5 C).  Ran into a flock of Juniper Titmice (Titmouses?) – but Bill didn’t have his camera.  Also saw a few Pinyon Jays – calling.  The only creature photo we got was a Hopi Chipmunk – very cute!

More amazing formations including Landscape Arch.  In 1991 roaring thunder was heard in the park – a large chunk of rock broke away from the underside of the arch, creating this noise.  No one is allowed to climb up to the arch any longer – it is very delicate and the widest span of any arch known in the US – nearly 300 feet.

It is nice to see the park staff build a fence allowing the local twisted juniper to continue growing without cutting it away! 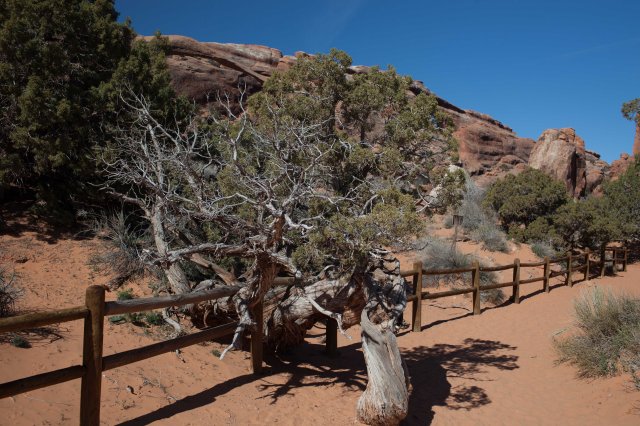 There is lots of character in these old logs.

There are too many amazing formations to include in this blog, but here are a few more – also including some from Dead Horse Point State Park.

Off to Fillmore for 1 nite – then Brigham City, just north of Salt Lake City for (hopefully) spring birding on the Great Salt Lake!