Hallelujah, at last we’ve left for our spring trip.  We were home for a month and spent the whole time recuperating from the terrible flu, unable to bird (or do much of anything).  Still not quite 100% but feeling better.

Thursday, May 8:  We took our truck to cousin Wilf for a service  in Maple Creek, our first stop in SK.  While it was in the shop he drove us out to his “ranch” in the Cypress Hills (a 1/4 section).  What a beautiful place with a full-service RV hookup!  We’ll stop for a few days there on the way home.  The crocuses were blooming on many hillsides – fuzzy pale lilac petals with bright yellow stamens  amidst the dead brown grass.  On the way back we spotted our first Mountain Bluebird sitting on its home on a fence line.  No camera nor binoculars on this drive!  Also stopped at the winery, which we’ve heard about, but never been to (maybe when we return).  Had dinner with Penny and Wilf at the Commercial  Hotel which has been restored by a group of Philipinos who have done a fantastic job – a year and a half of hard work.  Wilf’s friend took us on a tour of the rooms after dinner – they did a great job.

This time of year is so much fun – I especially love the baby animals in the fields.  The calves are so small their hind-quarters are higher than their fore-quarters (if those are the correct terms).  When they romp, it just makes me smile – so lots of smiling as one drives along the highways and byways.  I also saw a tiny foal, only a few days old, propped up on the most ungainly long legs – light brown with white socks – adorable.

Friday, May 9:  On to Swift Current.  A day of shopping and organizing, so we’re ready to go!

Saturday, May 10:  SK Landing for our VERY FIRST DAY OF BIRDING IN CANADA!  What a joy to be out and see our first birds of spring.  High was only about 10, but mostly sunny (a bit windy also).  We found some crocuses blooming here as well – and this time Bill had his camera! 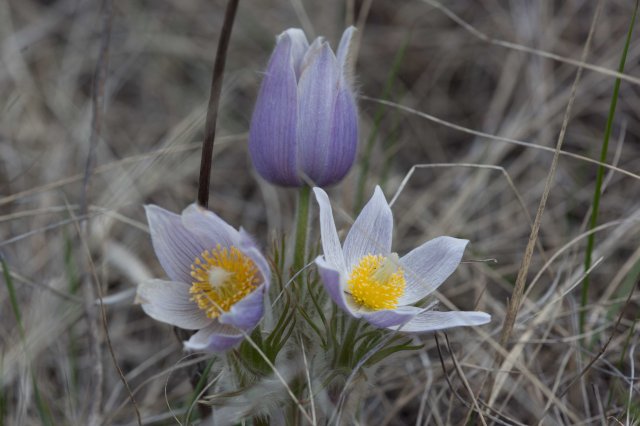 Some of our favourite birds include male Mountain Bluebird.  No photo of him, but a thrill to see his bright blue, almost iridescent colour as he sat in a tree.  The tree swallows were more numerous and this pair were getting first dibs on this bluebird house staked along the fence line.

We added a Say’s Phoebe, N. Flicker and a few sparrows at the equestrian campground also.  At the trailhead we found a Brown-headed Cowbird and more Tree Swallows were vying for nest boxes out in the meadow, but a female Mtn Bluebird sat in one – with a male nearby (yay!).  On the way out we heard Savanna Sparrows singing – here’s one now .

On the other side of the bridge, we went by the golf course and the new full-service RV park.  Kyla, Karen’s daughter and family were building their fire pit (I think that’s what it was).  We didn’t stop, because birding was just too important!  Most of the trees were showing catkins, but very few leaves were out.  A Sharp-tailed Grouse stood long enough nearby for a quick shot – not dancing on a lek, but a happy event! 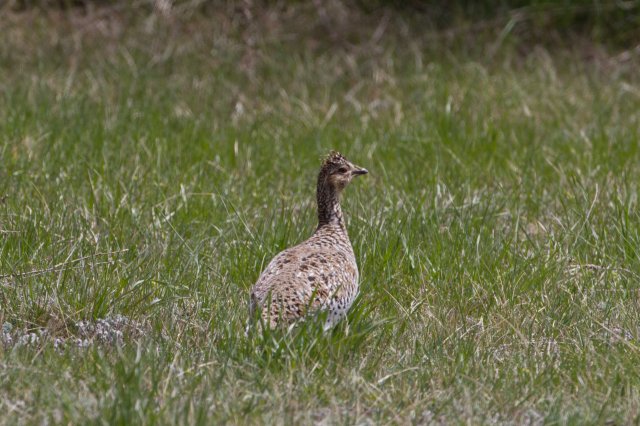 Numerous sparrows were feeding along the roadside (a common occurrence) and one of the most beautiful in NA is the Lark:

On the way out we found an unusual looking deer, lying in the grass – such a white face and those are some eyebrows!

When we returned, we had dinner planned with cousins Karen and Harold.  They dropped in to see our new Airstream first where we enjoyed a glass of wine and began our visit.  Then on their favourite Greek restaurant for a delightful dinner and more visiting!  So much fun to catch up.

Sunday, May 11 – Mother’s Day!   Sent some quick good wishes off to Mom before we left – too early to phone!  She’s going out with brother Brian to our cousins’ place in Cochrane (one of whom is newly engaged to be married – Robyn! – such exciting news!).

Off to Chaplin for shorebirds – something we’ve really been missing, since we didn’t find many further south.  North of Morse we found hundreds of Eared Grebes – along with hundreds of Franklin’s Gulls!  Here’s a shot of the “special” rear-end of an Eared Grebe, along with its red eye.

Not many of the shorebirds get close enough to have their photo taken, but Bill and I thought this was another interesting “rear” shot of a group of Am. Avocets. 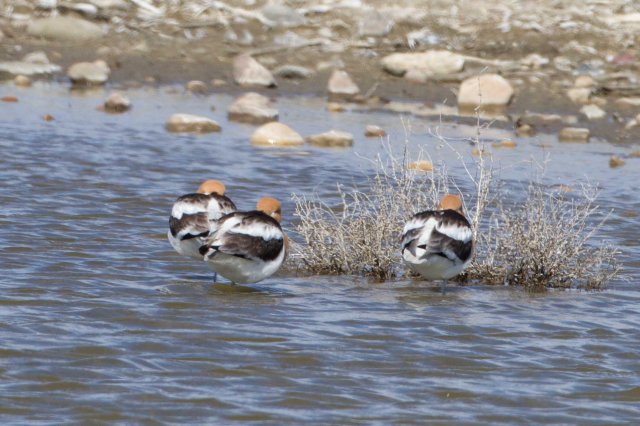 Happily we saw a couple of Tundra Swans on Reed Lake – since it is one of my favourite spring sights, especially when flying.  The white against different colored skies is always unusual.  Some of our prized sightings were unable to be photographed, but include Red Knot, Black-bellied Plover, Ruddy Turnstone, Piping Plover, White-winged Scoter, Black-necked Stilt and Red-necked Phalarope.  We were able to photograph a Willet and a Marbled Godwit – 2 of the larger shorebirds. 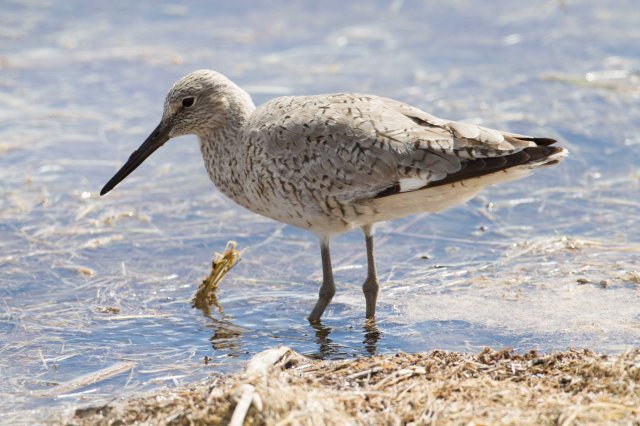 We returned home tired but elated with our wonderful day.

Monday, May 12:  Again we headed east to Morse and the Reed Lake area.  The day was cool (high 14, though they said it would only reach 10) and mostly sunny.  Windy also, but not as bad as yesterday.  We reached 80 species yesterday – that’s in 3 days!  Wow, I say!

The Black-necked Stilt was in the same slough on the west end of Morse, along with (we hope) it’s mate!  Hopefully they’ll breed here – and we got a photo.  This is especially for you Don! 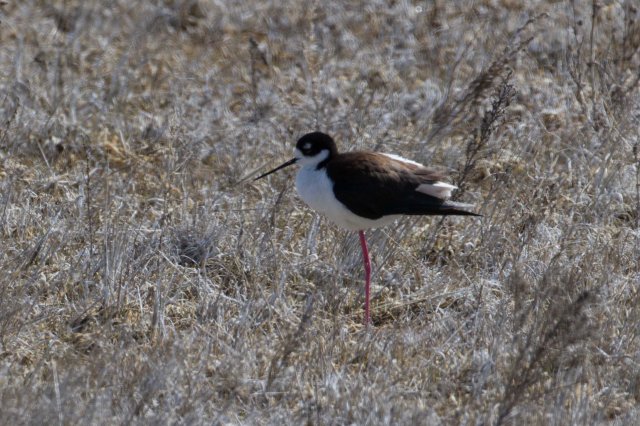 A Yellow-rumped warbler foraged at the edge of Reed Lake – not an expected place.  We also found one later and captured it taking off, which I thought was pretty cute!

A Yellow Warbler accompanies these 3 Yellow-rumps!  Another exciting bird was a Western Kingbird – all alone and didn’t stop long enough for a photo.  A hawk which landed on a telephone pole caught our eye.  We think it is a dark-morph Swainson’s (Don, Moe, Ron?).

A couple of Gray Partridge appeared in a farm yard but didn’t stick around long.  Here’s a record shot, which at least provides identification.  Bill didn’t think they occurred this far east – but here it is!

This Yellow-headed Blackbird nearly glowed in the reeds in a nearby slough.  There were lots of pairs courting and chasing each other in this slough.  Again, if you haven’t heard one and have an app on your device with bird calls – check it out.  Hilarious!

Here’s Bill’s nicest photo of the day, of a very common sparrow, singing his little heart out – Vesper Sparrow.  For a LBB (little brown bird) he has lots of pattern!

At Highfield Reservoir we added another new species – Forester’s Tern.  One obliged by landing on a nearby post – then Bill took on the challenge of holding up that gigantic lens while they were flying (he’s great eh?!).

We observed this herd of Canvassbacks.  It seemed an unusual sight with so many sitting on this little spit of land – along with a few other ducks.

It’s hard to photograph moving targets, but a farmer who was tilling his land obviously turned up some “goodies” from the earth and a large flock of Franklin’s Gulls were following along, many standing on the ground.  Their normally white underbody glows pale pink in the spring – quite the showy gull in my opinion with that split eye-ring, and red bill. 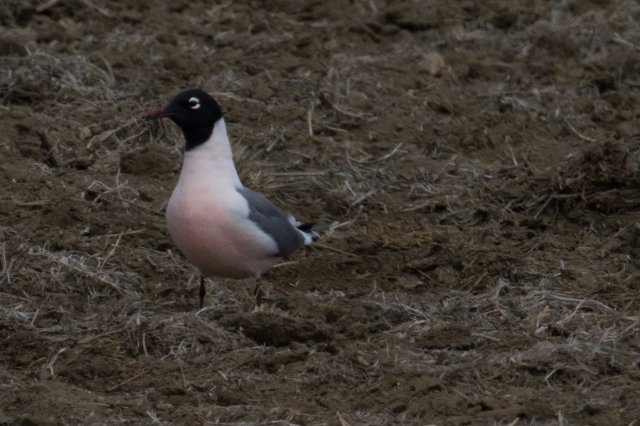 The last photo is a Loggerhead Shrike, who we chased down a fence line until it stayed long enough for Bill to lift that lens over the side-view mirror and capture him! 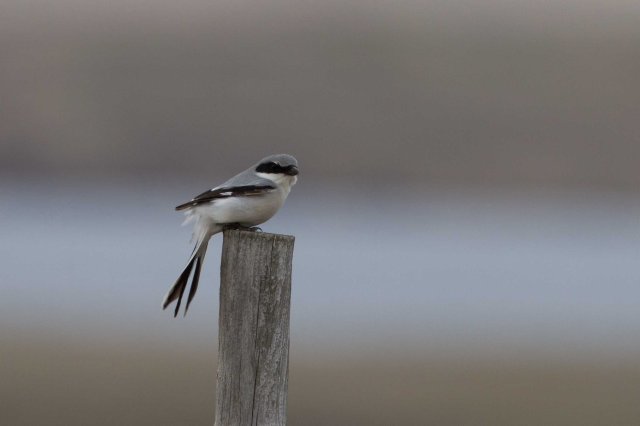 Tuesday, May 13:  A morning trip to SK Landing gave us 5 new birds for the list – Spotted Towhee, Song Sparrow, Downy Woodpecker, Wilson’s Warbler and Brown Thrasher.  The latter sang in the top of a tree, but not in the best light.  It is a mimic and was in fine spring form, using many, many bird calls to lure a mate. Pretty impressive!  Couldn’t get a shot in the sun – record only.

At the equestrian campground we discovered this Great Horned Owl with 2 rather large owlets.  We’ve seen a few GHO’s on our rounds, but this was the chance for a photo.

We finally captured the male Mtn Bluebird in the same meadow we found him earlier (and yes, his mate was there also).  Reminds me of the Vermillion Flycatcher, which seemed to be lit from within – only this one is electric blue!  Hopefully we’ll be able to find one a little closer before we’re done here.

Nearby was a lovely little Tree Swallow near his box.  They are pretty sweet also I think.  Great flycatchers.

One of our other new birds was this Song Sparrow – singing his little heart out at the top of this tree beside the slough.

The first dandelions of the season showed up here also.

The landscape in the hills is so beautiful – can’t really be captured on this medium, but Bill has many wonderful scenery shots on his DVD’s. 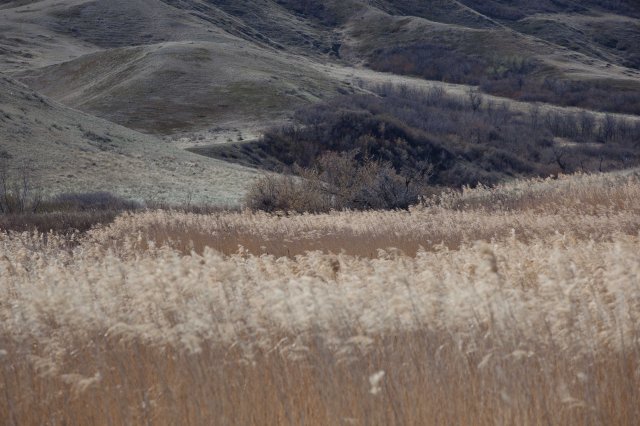 Our total for these 4 days is 94!  (We added a Broad-winged Hawk across from the RV park at the end of the day!)  Off to Saskatoon tomorrow to bird one day with Ron!