Woes (and fun) in Waskesiu

Thursday, May 15:  Went birding with Ron in the morning – added 11 new species to our list!  One of them was Trumpeter Swans – little did we know the controversy we’d created!  Ron called it in right away to the bird alert and apparently someone was out within the hour to photograph them!  Math – definitely one of my shortcomings – was wrong earlier and we only had 87 birds on the list (I though 97).  But now we have 98!  No photographs for the day, since it was raining all day.  We had dinner with Ron and Julie at one of the their favourite restaurants in S’toon (Truffles) where we enjoyed amazing food and wonderful company.  All in all, a fabulous day!

Friday May 16:  Drove to Waskesiu, stopping for groceries in Prince Albert.  We have to stock up because there isn’t much in Waskesiu.  Set up our trailer in the “A” row (next to the cabins on Pelican St) – then registered.  Takes about an hour to set up.  When we arrived at the kiosk, they told us pre-booking is now allowed (this was new to the registrar also) and our spot was spoken for for 2 of the days – so we had to move – yikes!  This is always a difficulty due to our satellite dish atop the trailer needing a clear view to the south.  So we looked around to see where we would find a clear view again.  Picked one in row “D” – first row when you arrive.  Seemed to get a lock okay, so set up again.  Afterwards, realized it wasn’t quite “on”.  So went back to check available sites and drove around to check them out.  Picked another possibility, then hooked up to the truck and tried moving back a few feet, to double check – GOT A LOCK!  So after 3 tries, we’re settled.  Oh woe!

In bed early, but awoke at 11 PM to find out the power was out!  Holy Mackerel!  Bill got up and dressed to move the truck around in case we ran out of battery for the propane heater (and needed to hook up to the truck).  He watched around the campground in case he saw any “official” type vehicles driving around to inform us of what was going on.  Nothing.  So about 2 hours later, he called 911.  He was royally told off for doing this – but explained that he didn’t know who to call in an emergency like this.  They DID call back to say a tree was down and Sasktel was working on it.  Finally he came back to bed – but we both lay awake for a long time, worrying if the propane would stop.  Low temps were about 6C.  At about 4 AM I awoke to see our clock was back on!  Hallelujah!  But it was an exhausting and worrying night!

Next day was cleaning, laundry and sorting for our stay here.  The campground was getting pretty busy with long-weekend visitors.  With the lake still completely frozen, right up to the shore, there will be no water sports!  Still snowbanks everywhere, though we hear they are going to open the golf course!  No birding today.

Sunday, May 18:  BIRDING AT LAST!  Headed out early to our favourite hike – Mud Creek.  Well, the gate was closed, so we parked.  First bird we saw just behind the truck was a Rose-breasted Grosbeak! 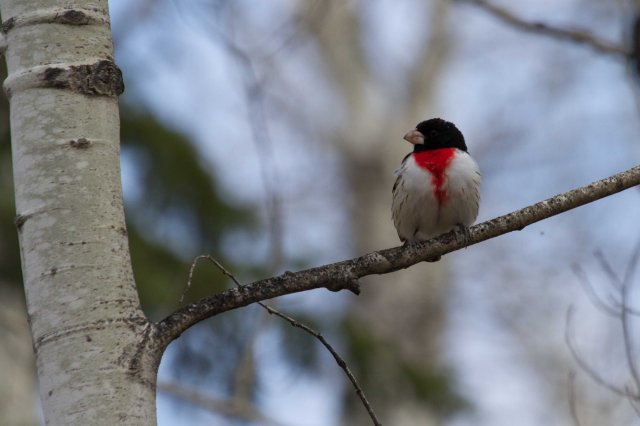 It was pretty quiet – no Tennessee Warblers, which are the most common warbler in the park!  But we heard a Winter Wren (one of the best singers in N. Amer.).  The road was muddy and it was pretty wet everywhere (along with snow banks), but we did hear an Eastern Phoebe – and finally saw him.  I love the next 4 sets of shots:  first the bird, then the take-off!  Here’s the phoebe first: 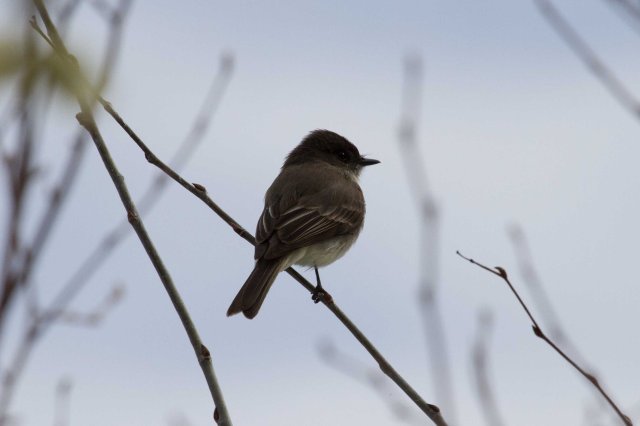 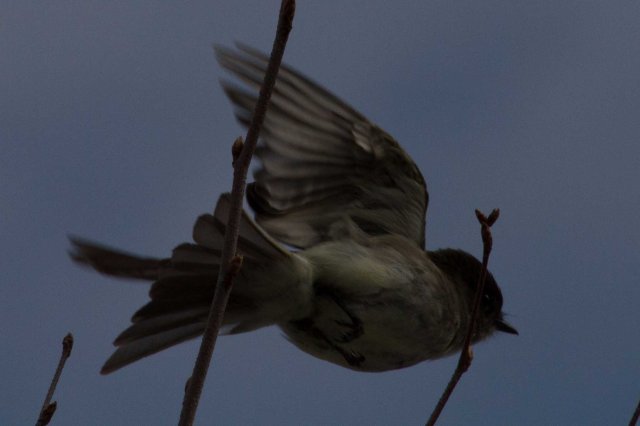 Next is a bird we normally have trouble seeing, because it nests high in tall fir trees – we usually hear it.  So it was great to have it so close – Cape May Warbler.

This mixed group of warblers was feeding on “pussy willows” which were starting to go to seed.  Here’s a Yellow Warbler:

A Blackpoll Warbler was feeding in other nearby trees. 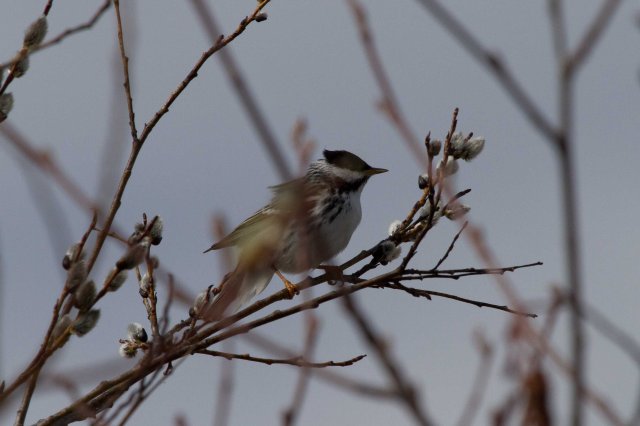 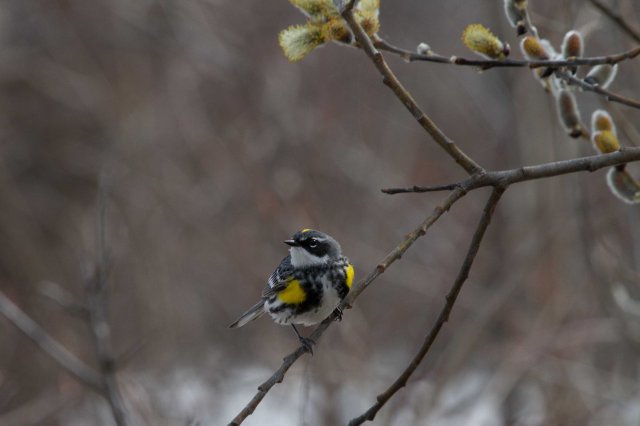 Above is a Yellow-rumped Warbler – of the beautiful Myrtle variety.  The Song Sparrows were the only other birds singing in the area and they were chasing each other around and looked pretty serious about getting “spring” activities underway. This despite the size of the snowbank shown here with a Chipping Sparrow in front. 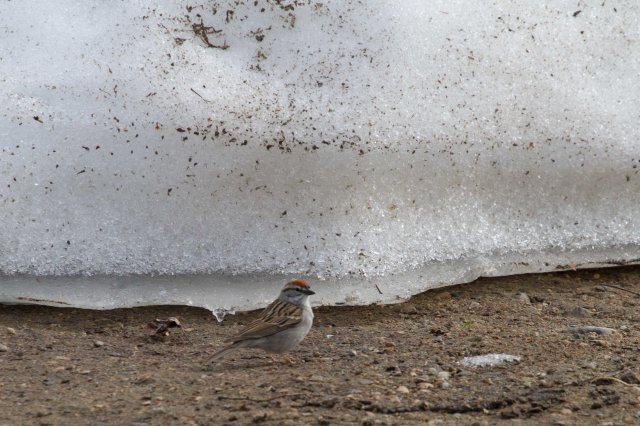 Chipping Sparrows were not singing here but we’ve heard one outside our trailer regularly.  Here’s a shot showing more snow and some of the frozen lake. 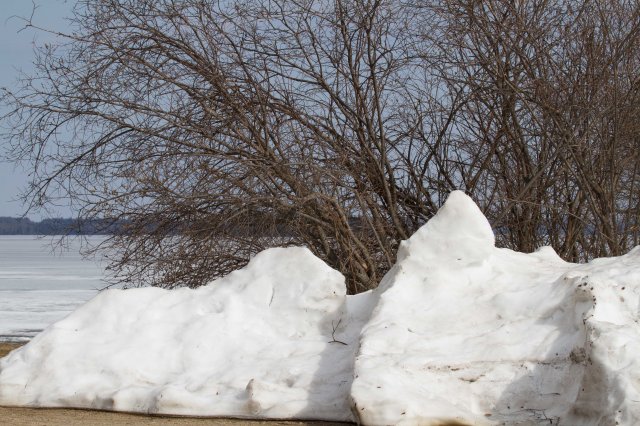 We also found a Yellow-bellied Sapsucker (gotta love that name) but no photo.  We left before noon to go back home, Bill needing to work.

Monday, May 19:  A morning trip back to Mud Creek.  We drive slowly to check any movement along the road and also stop at the small lake just before the turn-in to the creek.  We looked up a few times to observe skeins of Snow Geese flying – maybe the ones we found on our way to S’toon!  I’ve never seen so many in my life and the patterns they made was beautiful.  Here are 3 (I think Bill had about 20 of these shots).  There must have been thousands! 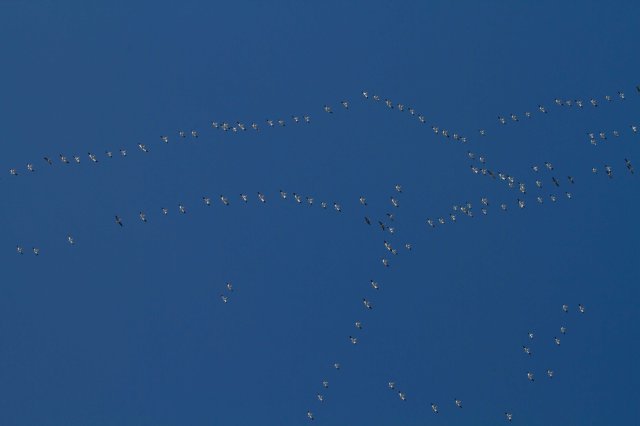 While at the lake I had another LIFER – actually not a bird – a WOLF!  I knew they were around and he was trotting down the road.  Bill said he saw a coyote cross the road, but when we looked it was a medium coloured wolf – so exciting!  He ran off before Bill could get a photo.

Nearby in the lake we saw a Common Loon (a long way off).  We’d heard them flying over, calling yesterday.  I imagine they were complaining about Lake Waskesiu being frozen!  But the small lake was open and we found a Blue-winged Teal closeby.

When we checked out the parking lot at the creek, the phoebes were building a nest under the peaked-cap roof of the information kiosk. I sure hope no one disturbs them once it gets busy with people.

We rushed home to do laundry then wash the trailer.  Bill dropped me off (it’s a few blocks away), but came rushing back a few minutes later realizing he’d left his iPhone in the pocket of his pants – YIKES!  Well, there’s no stopping these front-loaders, so it did the full 20 minutes.  It was completely black when I removed it after the cycle stopped (sigh).  So when the drying was done we rushed home for lunch and prepared to drive into Prince Albert to buy a new chip for my iPhone (just reserve our Rogers chip for our return to AB).  When we finishing lunch Bill exclaimed “the Apple came on!!” — well, sure enough we were able to get the tethering back to hook up to the internet (Bill especially needing this facility) – plus using the internet, email, etc.  The screen was a little iffy around the edges, but not bad.  I tried calling Mom awhile later, but it cut me off after a couple of minutes.  So we decided to go into town tomorrow if things weren’t any better by then.  The afternoon was occupied by hand-washing the trailer:  1 bucket for soapy water, 1 for rinse water.  Then after it dried, buffing with a towel.  We also cleaned the windows.  Now we have a gleaming silver-bullet!  We were so exhausted we went out for dinner to the Hawood (excellent meal)!

Wednesday, May 21: In the morning the screen had cleared up, the tethering was working great and we called the LW office and spoke for 10 minutes or so – all good!  Yay!  So no trip to PA.  Off to bird awhile.

Across the road from the campground is a path which connects to some others, and paralells the water treatment ponds.  First bird we heard was a Yellow-rumped Warbler.  Chipping Sparrows sang a little way off.  They we found a pair of Amer. Kestrels – male and female (ah yes, spring is in the air!)

A short way along Bill found a Pileated Woodpecker – the largest  woodpecker in NA.  We heard it drumming earlier, but is sat in this tree with it’s red crest glowing like an ember!  What a huge, beautiful bird! 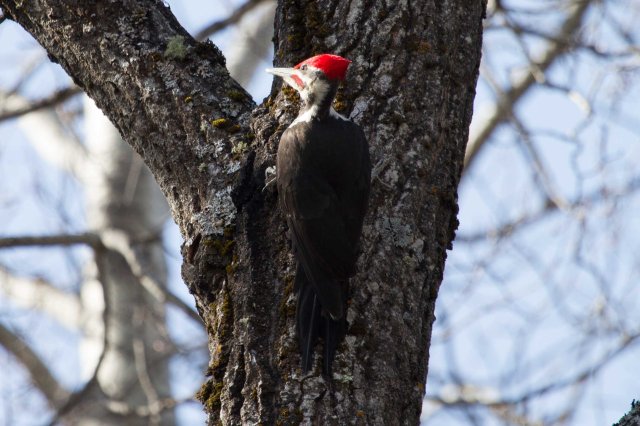 A large puddle prevented further exploration, so we drove back to Waskesiu Drive, parked at the end and walked the old road.  When we first hit the path several sparrows were feeding along its edge.  A White-throated Sparrow glowed in the sun!

A veritable goldmine of warblers fed among the catkins in a large swampy area.  Lots of Tennessees.

Another Cape May showed up (and you can never get enough of these beauties).  I hadn’t realized it had those white spots on its wings – you never know what you’ll find when a camera shoots 3 to 8 shots per second! 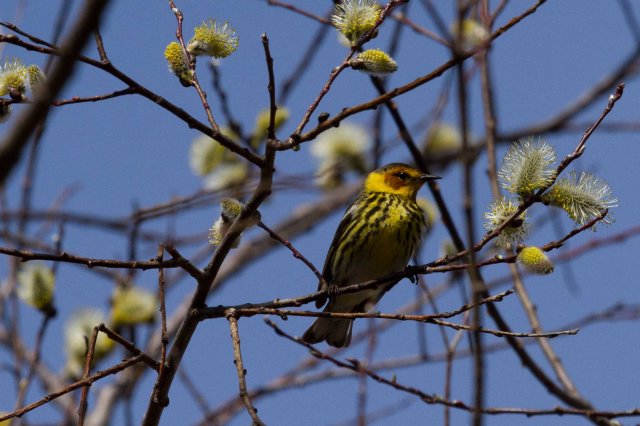 We found a couple more Boreal Chickadees, but could only get a photo of this little Black-capped fellow on a stump. 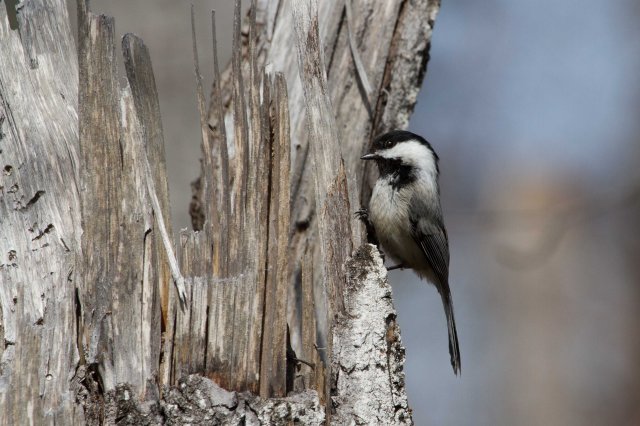 There were American Redstarts, Rose-breasted Grosbeaks (male and female), Yellow-rumps and some flycatcher we couldn’t find again to identify.  It was loads of fun!  At the end of the road we found this little guy quietly munching on something, minding his own business. 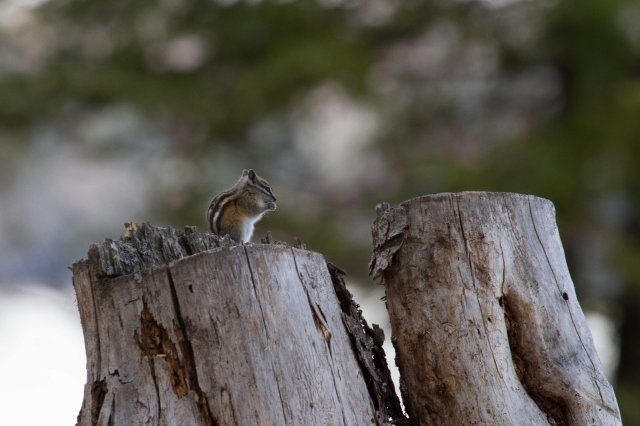 On to PA for groceries after that – then a good night’s sleep.