Mar. 2-5:  Travelled to Benson AZ with stops at Uvalde TX, Alpine TX, and Las Cruces NM.  In NM we could certainly feel the dryness compared with the humidity we’ve had all along.  It got down to -2C overnight also!  Benson was clear, sunny with temp around 18C.  There was however, high winds.  At least we got out to our favourite little Mexican Restaurant “Mi Casa”.  The food was just as excellent as we remembered.  This is our very favourite Mexican restaurant ever!

Mar. 7:  San Pedro Riparian National Conservation Area.  How much fun to see new birds!  It was cool in the morning (8C – but a far cry from -2!) but sunny with a high forecast to be 20 with low winds!  Yay! 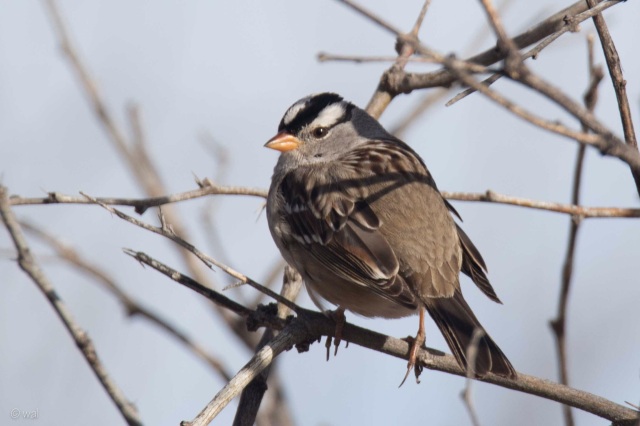 Our first White-crowned Sparrow!  They were the most numerous sparrow last winter, so it seemed weird that we didn’t seen any in TX!  They were out in numbers! 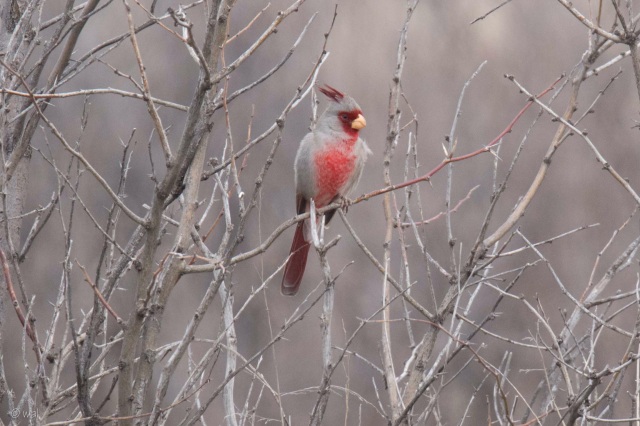 Our favourite towhee – Green-tailed (with a House Finch in the foreground).

Although the fields were quite dry and brown, along the river the large trees were glowing with spring green. 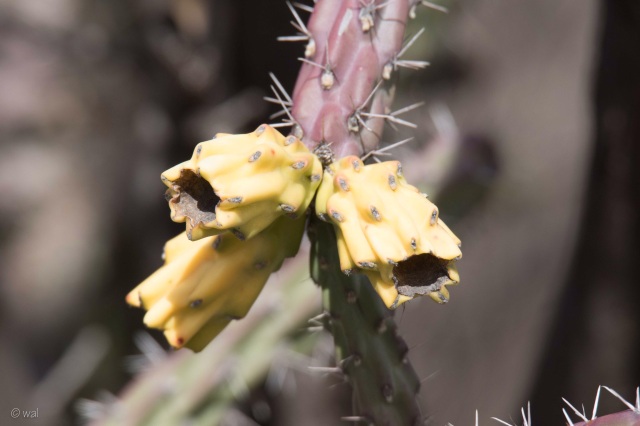 The chain cholla’s fruit had ripened to yellow.

Piles of logs have been left to dry where they’d been deposited by floods.

Several pairs of Vermillion Flycatchers were active – spring was in the air!  Males pursued females.  Here’s a female awaiting a suitor. 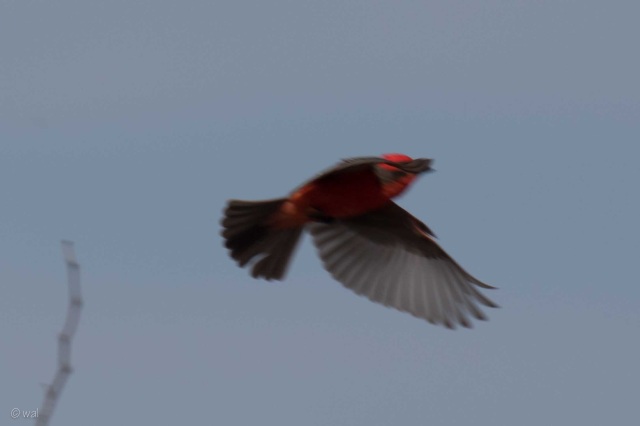 Here’s a male busy catching flies, in between amorous pursuits.

A Black Phoebe scanned for hatching larvae from the river.  Interestingly, we didn’t see the many types of sparrows we usually see here – I guess it’s a little too early.  Our SK birding buds are coming down this way the end of April, so will no doubt “clean up” on the migrating birds in this area!  Oh well, we’ll see them with the spring plumage warblers at Waskesiu in May.

…and a Horned Lark.

Then we headed for Ash Cayon B&B where we made a couple of trips last year.  As usual, there was lots of acitivity in the yard.  She has so many excellent brush piles and areas of protective cover.

Gila Woodpecker at a feeder.  They have taken over the noisy role that the Golden-fronted filled in TX.  This female does not have the big red patch on her head like the male.

It looks very similar to our female Northern Flicker, but the flicker has a brown back and a big breast spot.  Males also have a black or red moustache (malar)!

Here are 2 more towhees:  Top is Canyon, bottom is Spotted.

Once again we saw several yellow-nosed cotton rats, including 2 babies (about half the size of the adults, so not teeny).  They are not really rats, but in the vole family.  Luckily they do not cause problems for the birds, just eat seeds.

Now we have Bridled Titmice, which have taken the place of Black-crested which we found in TX.  How cute!

A White-breasted Nuthatch showed up on this nut bar. 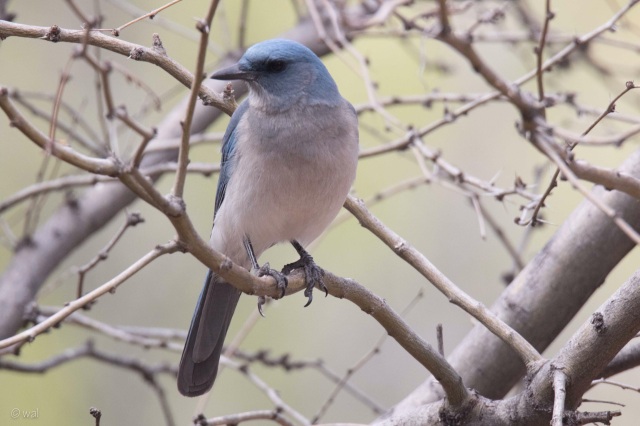 Of course, especially for Veronica, we have the Mexican Jays.  They are big, bright, beautiful, smart and noisy (sound familiar?). 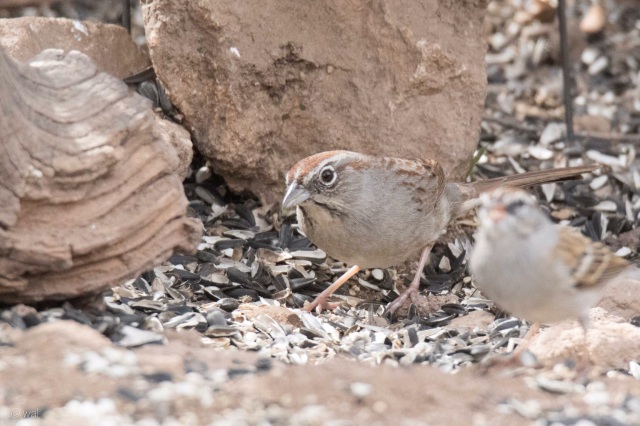 Also seeking shelter in the brush pile, this Rufous-crowned Sparrow – not as common as a Chipping Sparrow (foreground and of course it is not in focus, Bill wanting shoot the R-c).

Pine Siskins showed up at the communal seed feeder.  They are fairly plain, but have yellow on wings and tail.

A Bewick’s Wren ventured out of its shelter in the brush pile to flip a seed into its mouth.

A pretty male Least Goldfinch sat on a log.  They are also very communal birds, singing together in multiple harmony, their very sweet song.

What a great day!  So much fun to add so many new birds to the list!

Mar. 8:  My brother David’s 62nd birthday!  I sent him a card earlier, but sent an email this morning.  It is also my friend Rosemary’s BD – sent her an email also.

Off to Patagonia!  Stopped at the Paton’s yard, which has seen many changes.  The original inhabitants have left and a new caretaker has moved in.  There are some new signs, including advertising for Victor Emanuel Nature Tours (we’ve done a few of those excellent tours!).  He is a part owner, along with a couple of others. 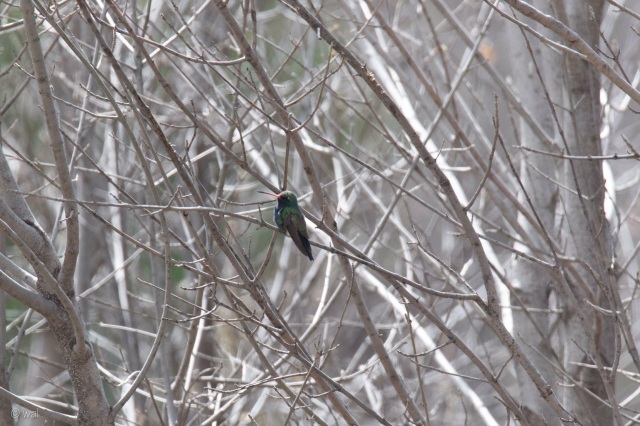 Managed to get this shot off whiloe it was resting in a tree – instead of on a feeder:  Broad-billed Hummingbird.

We always see Gambel’s Quail in the yard – no exception today.  This male is strutting his stuff.

The yard is being dug up by pocket gofers.  It is pretty rare to see one, but Bill managed to get a shot of its little furry face.

This little male Ladder-backed Woodpecker looks sort of punk with his spiky hairdo. 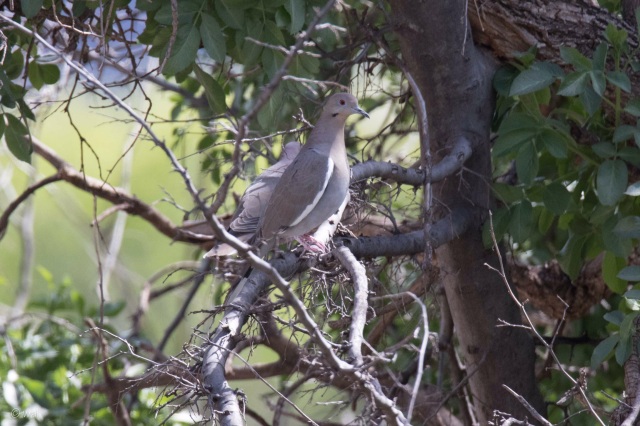 There was also a new dove for the list:  White-winged.

A mile down the road is the Patagonia-Sonoita Nature Conservancy lands.  A beautiful day for a walk. 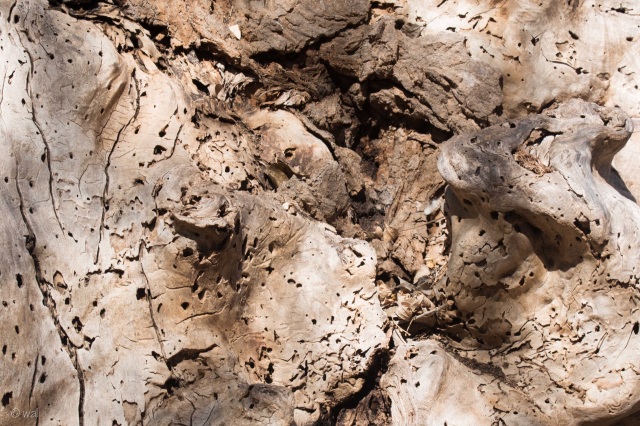 Some of the large trees have amazing growths on them.  This knot was about 6 feet across!

Looks like a lava deposit, about a foot across.

Spring is in the air, but the birds are not too abundant yet (yep, waitin’ for the SK buds!).

Just to prove the point that spring is indeed in the air, a pair of Pinacate Beetles locked in an embrace.  Sometimes they’re called stink bugs because they’ll give you a schnozz full of putrid aroma if you try to injure them).  We see them languidly walking along the dirt paths all over this area, but these 2 were hard at it, even when we returned over half an hour later!

There were some beautiful black swallowtail butterflies flying around,  Unfortunately, the only one which stayed for a photo ( a Spicebush Swallowtail Butterfly) had lost a lot of its black as well as its turquoise irridescence.   The lower tail portion is still slightly colored, as you can see.  About 4″ across.

We did find 1 new warbler – Black-throated Gray.  Not the greatest shot, but you can see (if you look carefully), the little yellow dot in front of its eye.  Just a record shot.

The man who worked at the office at the park said there was a Long-eared Owl nesting at Lowe’s in Sierra Vista.  So on the way home, we stopped there to see it.  We were pretty excited – it would be a Lifer for me, and Bill has only seen 1 in his life.  Imagine our COMPLETE DISAPPOINTMENT when there were a pair of Great-horned Owls in the garden centre (open to the sky) nesting.  There is no phone number or we would have called that man right back and told him off! We were steaming all the way home!

Tomorrow we’re off to Tucson, where we stay at the Lazy Daze KOA and get a service to to our airstream.  Nothing major, just a few small adjustments which are under warranty.  Then it will be off on more birding adventures before we make our way north.