Mom celebrated her 99th birthday here in Maple Creek with us!  Penny & Wilf joined us for dinner.

I made fresh spinach pasta (Mom wanted to see me make pasta!) & lemon veal for the main.  Mom loves lemon – so lemon pie was dessert!  As you can also see, she’s drinking whisky (wooh!). 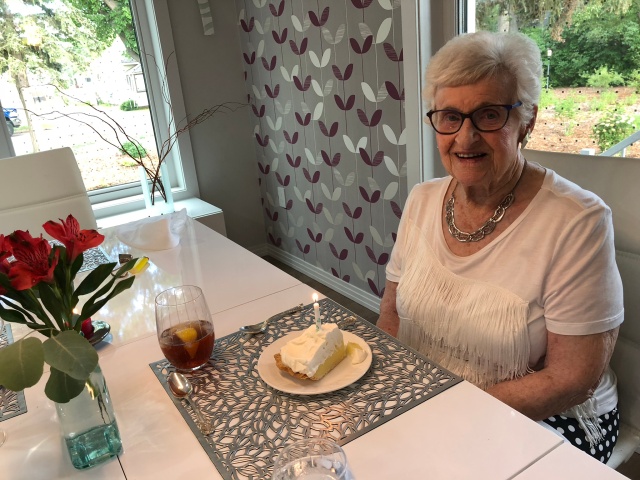 (She is getting ready to make her wish.)  David & Inga had her celebration back in Calgary with family there, a week later!  Not only that, but her old neighbours Sheree & Dave arranged a surprise party for her a week earlier at the Glencoe Club complete with birthday cake, presents & huge metallic balloons with “99”!  She was amazed & thrilled.  What good people eh?

Our friends Lorne & Joey stopped in briefly on their way back to Calgary from another 99th birthday party – Lorne’s aunt in Rosetown!  I was in the middle of making cinnamon rolls, so they lucked out & got 2 while here (& I sent a couple more with them for the road!).  (They aren’t drinking scotch or rye – it’s iced tea! – just in case you were wondering, since it wasn’t 5 o’clock yet!) 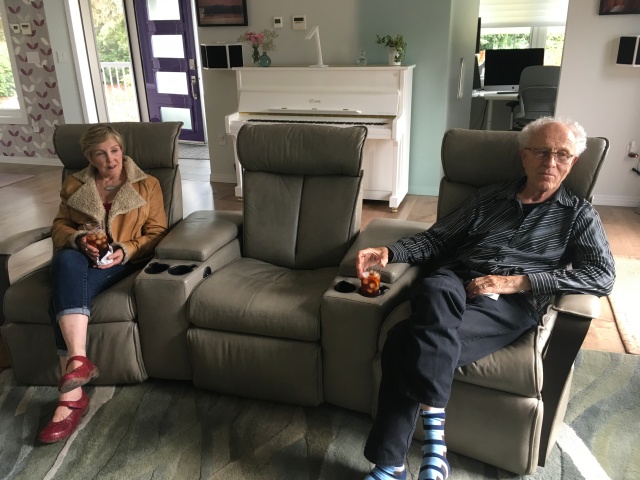 We’ve been out birding quite a bit & I always enjoy the flowers.  I was thrilled to find prickly pear cactus in bloom.

I didn’t know what these were when I first saw them, but discovered they’re milkweed!  Pretty impressive flowers & a big draw for butterflies. 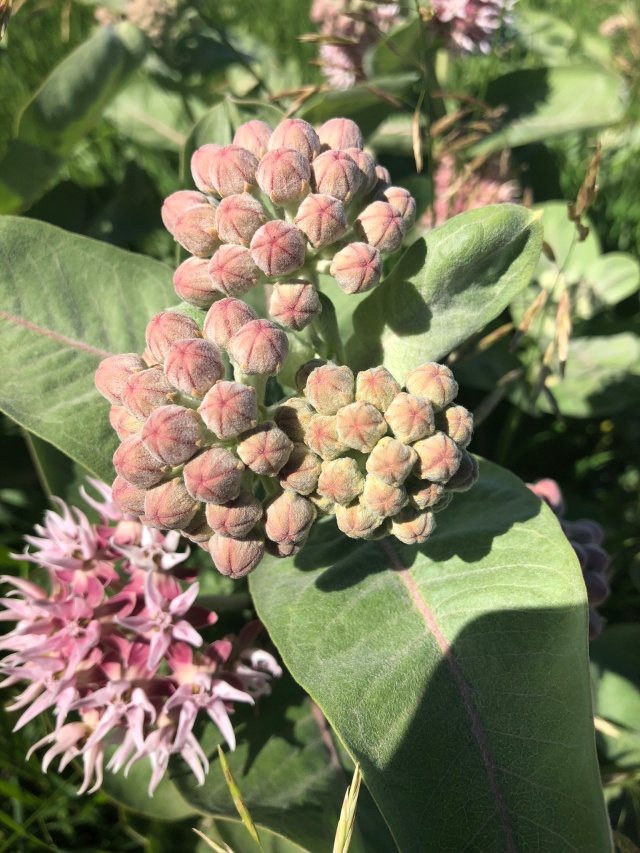 Out at Kevin & Rhonda’s ranch I finally took a pic of the DU (Ducks Unlimited) plaque commemorating their contribution to the saving of wetlands on their property.  It reads:  “KEVIN & RHONDA WEISS DU 2011”. 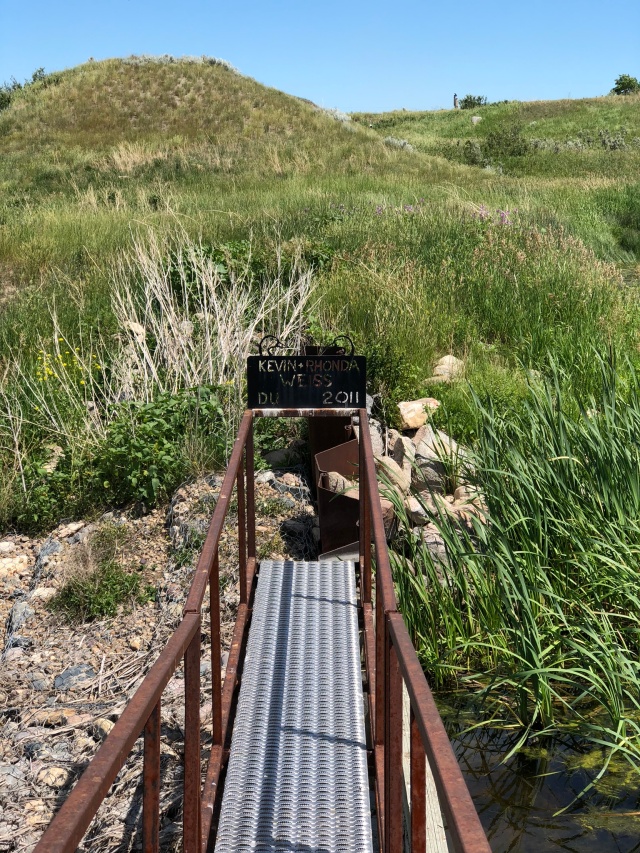 On June 27th we made a major change in our lives for good!  Sold our Airstream trailer to a couple from Comox, BC – Jeff & Joy.  Here is the photo they sent us after they arrived home to the “wet coast” (as they call it).  They have re-named our trailer “Maple”. 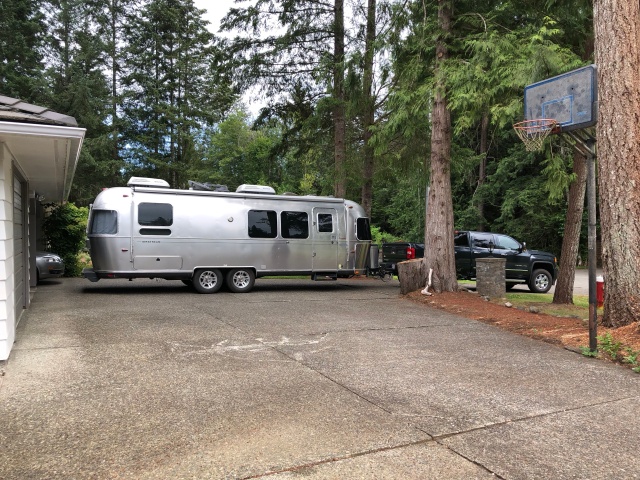 We might have lost something – but we also found something!  A cousin we never knew existed!  She was the daughter of Aunty Joy & Bob, but we think their relationship was in difficulty so she was given up for adoption.  The couple who raised her were Icelandic (so staying in the general realm of Scandanavian countries?).  She brought her son with her for dinner to Penny & Wilf’s.  Luckily Joan was also visiting SK & attended – plus Karen. 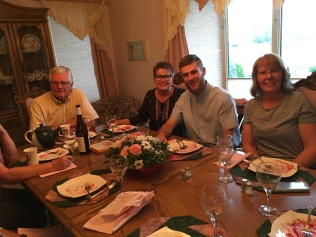 Here are all the 1st cousins, Joan, Aldis, me, Penny & Karen. 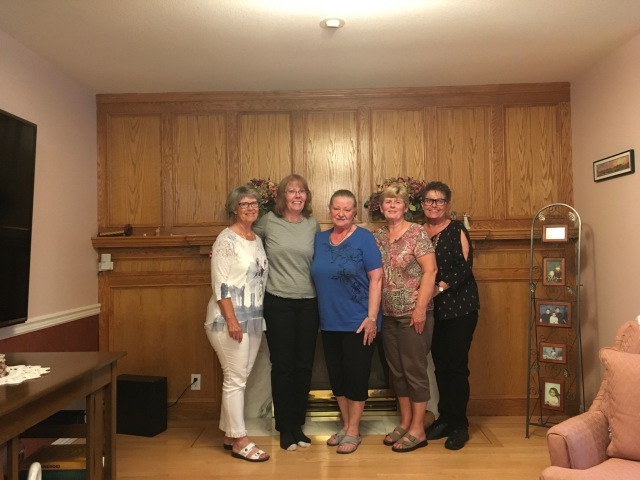 There was another special event which has been described by Steven Usher so well, that I will just repeat it:

Erin and son Alastair are in Scotland.  They called us to tell us of their visit to the Standing Stones.  Al suggested they touch the stones and Erin said they should touch together with their eyes closed, just in case something happened, it would happen to both of them.  They did this and when they opened their eyes there was a magical ring on Erin’s finger. 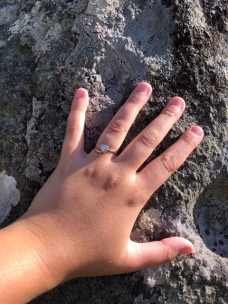 How cool is that!

On July 8th our good birding friends, Ron & Julie from S’toon came for a visit.  We were out at Kevin & Rhonda’s, as well as many other places. 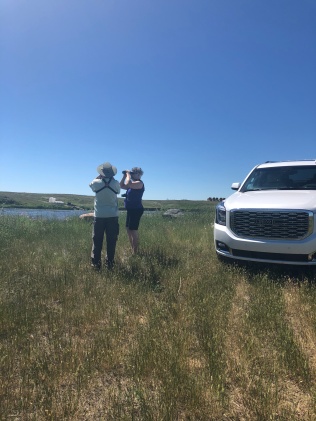 We had a great time & were very impressed with our drive through the rolling hills near Eastend – with all the rain we’ve had, the hills were so green!  There are a lot of deep valleys which support spruce trees as well as decidious  trees.  So, so beautiful!

Our birding bud Don, keeps letting us know of unusual bird sightings around SK & one came along which we just couldn’t pass up!  3 adult Whooping Cranes were seen north of Diefenbaker Lake, so we travelled up to check it out.  Happily, we did see them!

Sadly, we tried to get closer, but got stuck in the mud!  They don’t call it the Lackawana flood plain for no good reason!  I walked around 2 miles to what looked like the closest farm & found a lovely couple who brought their tractor & pulled us out!  We were extrememly embarrassed.  When I told her that she wouldn’t believe why we were stuck, she said “Whooping Cranes”!  Apparently we aren’t the only ones looking & they had to haul someone else out a few days earlier! 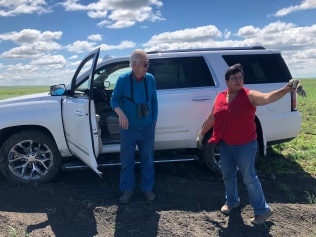 They refused payment of any kind – just said to send them a photo (which we did of course!)

We were out birding in the middle of July & saw a rather rare sight – a pair of Eastern Bluebirds!  They aren’t often seen in this area, the Mountain Bluebird being the common inhabitant.  theThese easterners were  sitting on a fence post near an old bluebird box.  We didn’t see them  again however.  They are blue with rust breasts (I know – small in this photo!). 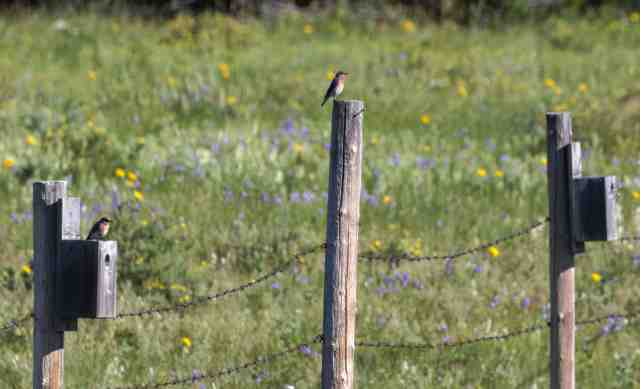 Near the end of July our dear cousins finally dropped in for coffee.  Barry & Janet have a cabin out at Cypress Hills & spend quite a bit of the summer there.

The highlight of our summer was the GNOBB!  That’s the: Great Northern Ontario Bleakley Bash.  It was held in Kenora, ON courtesy of our dear cousins Anne & Dave who own a cabin on Lake of the Woods & invited us all!  It is the first time all the cousins from Dad’s side of the family have had a reunion.  We took Mom out with us, flying from Calgary to Winnipeg, then driving to Kenora.  What a beautiful drive!  And what a beautiful event!  It was so great to visit all those beautiful Bleakleys – they are truly wonderful people.  Thanks to our Grandma & Grandpa Bleakley (Gladys & Wilmot ).  We found these old passport photos among the groups of photos brought by everyone.  Did you know that Grandpa was a doctor & a dentist – also did plastic surgery on maimed soldiers during the war!  Granny was a teacher & a nurse! 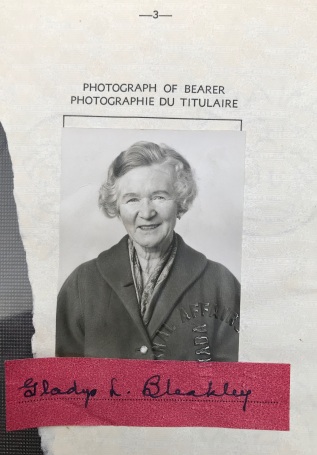 There are sone strong genes in this family – what a great example of Aunty Bunny & Granny (probably at similar ages).

Later we got together fore a group photo.  First just the cousins (with Mom seated at the front).

Then including spouses (20 of us).  In case you may be wondering, a friendly neighbot stopped by to say hello & was wrangled into taking this shot!

We feasted like kings & queens.  Greg brought home-made sausages from Michigan (his Italian friend makes them) & Anne & Dave supplied the beautiful pork tenderloins.  Most of the salads were left over from the pot-luck a day earlier.  Dear Nancy made Uncle Jack’s uncooked blueberry pies!  Sorry I didn’t get a photo of the pies! 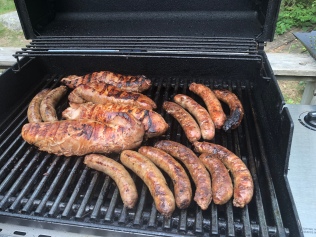 Here are a few photos from A&D’s dock.  It was very hot & humid, so most people took a dip in the lake to cool off when they needed to! 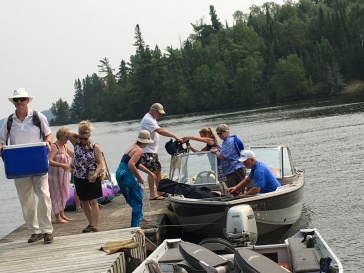 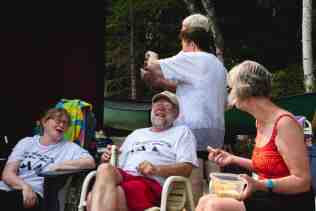 There is lots of musical talent amongst the Bleakley cousins & Jon regaled us with a song or 2 accompanied by his guitar.

Later we convened on the deck up at the cabin.  Mom insisted on climbing the whole way up (must be about 75 stairs or so!).  She was accompanied by 2 strong, much younger men, but she made it!  Pretty amazing for 99 years old!  Here are a few photos from the upper deck. 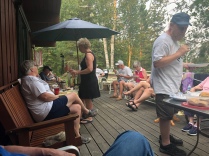 We had such a great time visiting all these wonderful people who share our genes!  Thank you so very much Anne & Dave for extending the invitation & taking care of so much.  And thanks to everyone who helped out with food & cleaning up from all the mess.

On the way home we had lunch at the Winnipeg Airport & Mom wanted a sweet to go with her coffee, & I found a chocolate-covered brownie at the chocolate shop across the hallway!

I think Mom had to rest every day for a week after this outing!  She hasn’t made a trip on an airplane for quite awhile!  She did say she wouldn’t have missed this for anything!

Our dears Penny & Wilf invited us over for my birthday on Aug. 18th!  I brought the dessert (made w/ Stevia for a diabetics) – sour cherry pie. 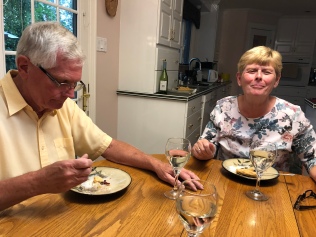 A few days later it was cousin Karen’s BD & my dear Janie stopped into our place & stayed overnight, then went on to Swift Current to celebrate with Karen! 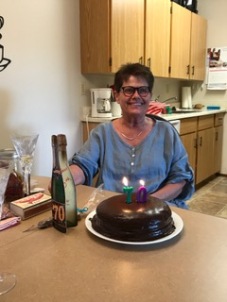 When we went to Calgary a few days later we celebrated with lots of family at Katherine’s restaurant “Char Bar”.  We had a most excellent dinner & were served by an amazing server (Katherine)!  That’s her with me on the right. 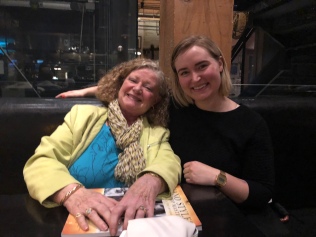 In early September by best friend Sandy came out from Chestermere Lk for a visit.  We took her out birding & while we cleaned out the bluebird houses (& put a few new houses).  We had a laugh at the height of land due to the warning sign posted there!

Sandy caught us cleaning out the bird houses.

Sandy saw her first Belted Kingfisher on this trip – & was rewarded by being able to see it whack its catch against a tree branch before swallowing it.  We didn’t get a shot of that (too far away) but saw another kingfisher sitting on a wire over the dam.

She also took a few other photos on the trip – I loved this one.

We had a report of 137 Whooping Cranes seen north of Saskatoon heading to their southern wintering groups.  We don’t think these numbers have been seen since the late 1800’s perhaps.  With total number near 12 in the 1950’s, this is a wonderful comeback story, helped along by man of course (who wiped them out in the first place).  There are over 400 now in North America.  Here’s a photo of the large group – pretty far away.

Someone got a little closer to a couple of them.  We plan to keep this time-frame available for a trip up to S’toon next year.  We just couldn’t do it this year!

In mid-October we brought Mom out for a few days for a visit.  Cousin Karen came for dinner the 1st night & stayed over!

One of the main reasons Mom came at this time was to go to the fowl supper.  It’s a fund-raiser for the United Church & Penny always contributes & helps out.  It’s turkey with all the trimmings! 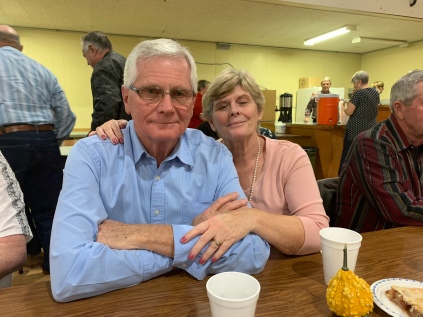 Unfortunately Mom’s hearing aids weren’t working properly so she wasn’t able to visit too well.  Happily the weather was beautiful so we took her for a car ride to the Hills & had the usual stop at the height of land. 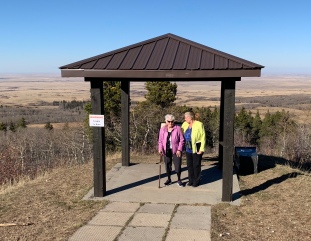 I had coffee with our house builder’s Mom – Florence (that’s Blaine’s Mom).  She’s such a sweetheart & I took a selfie to send to Blaine, since he’s down in AZ right now.

This year on Halloween I created a new jack-o-lantern.  Cousin Steven always dresses up for Halloween – cool! 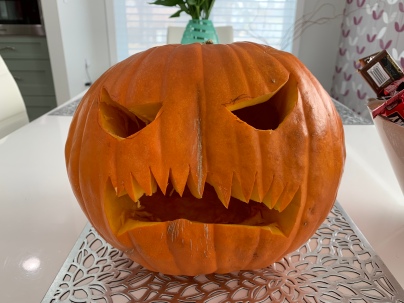 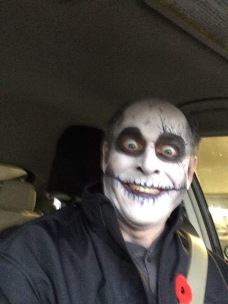 Our only visitor in November was our investment advisor – Dave, who made us dinner last year when he came out for a hunting trip.  This year I made him dinner! 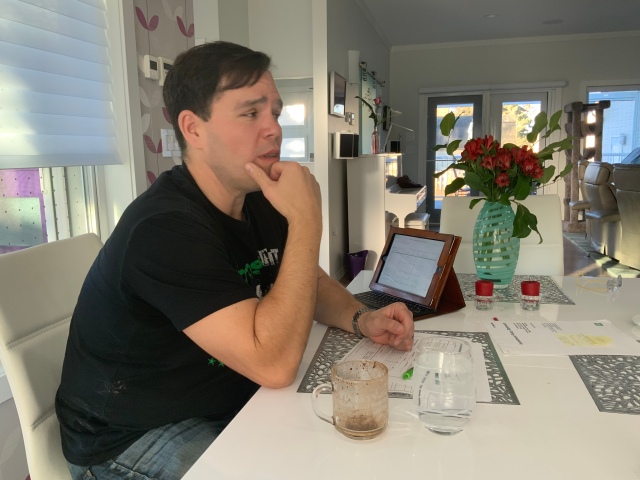 I will catch up on Xmas on my next blog post!