It was a good & bad Christmas.  Firstly, Bill was diagnosed with the onset of congestive heart failure & pneumonia (after a too-long period of denial!).  But he was given some effective diruetics to resolve the congestion & antibiotics to help clear his lungs..  It took an extra trip to the hospital to resolve the issue, but he is feeling quite a bit better & will see his doctor after the doc returns from vacation.

There was a lovely sunset Dec. 13th- this is the view from our back deck (not the most beautiful foreground, but…

Our cat-sitter Kaitlyn dropped off a little Xmas gift to us & a card, but the most special part was the photo of her with her horse “Pistol” – we just loved it! 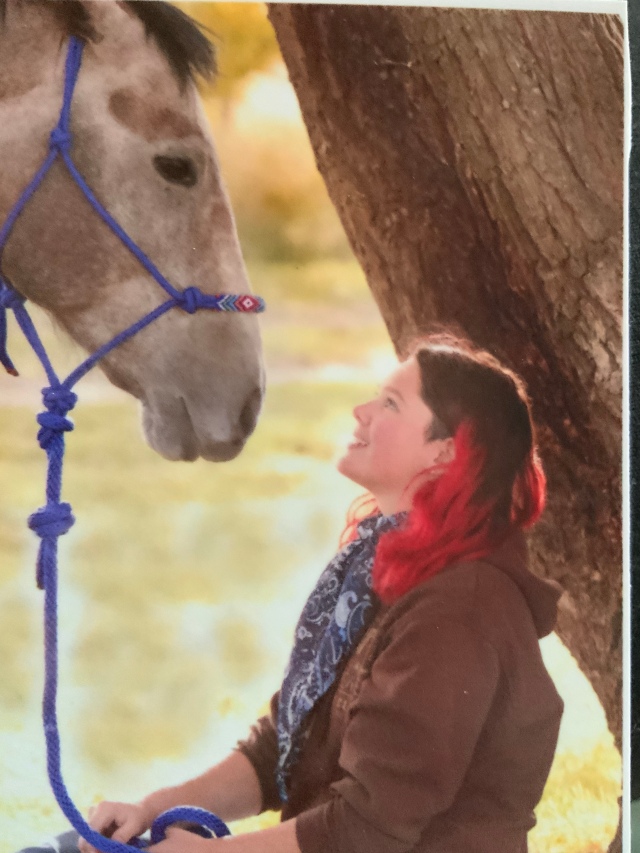 We made 2 quick trips to Calgary in December, the 1st to the LivingWorks Christmas party.  Bill looked so handsome in his suit & Xmas tie I had to take a photo! 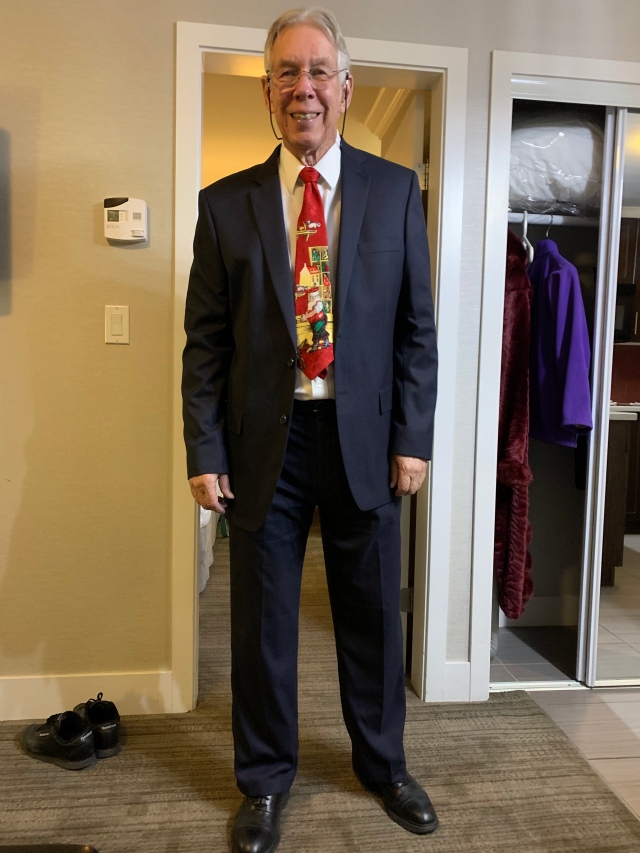 We had our tree up early December & found the 1st presents hidden below soon afterwards:

We had a quiet Christmas and celebrated when Mom & Brian came on Dec 27/28, so that’s when we had our turkey dinner. 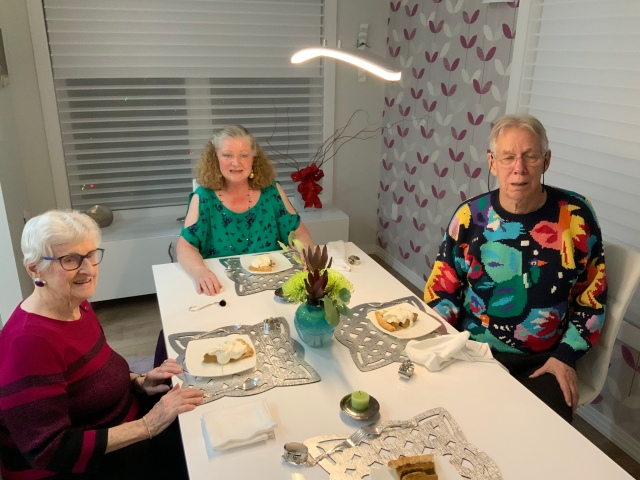 Such a nice photo of Mom & Brian.

Penny & Wilf dropped in for a quick visit the day they left.  P&W are heading south to their place in AZ Jan. 1st, so we were very happy to get a chance to see them before they’re gone for the winter.

We took a drive out to Eastend (& made Brian come & not sit in the house playing games on his phone!).  It was slightly foggy in the morning, but after we had lunch, the sun came out for the drive home.  We found a lone Snow Bunting sitting on a fence (there are usually large flocks together). 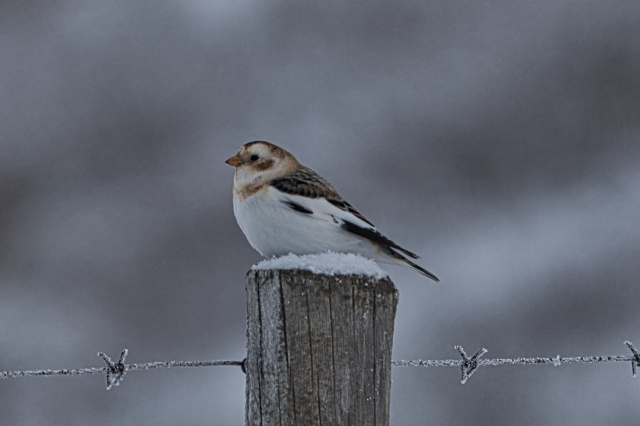 We told our rancher friends, Kevin & Rhonda, about it & he said he always sees little white birds when he’s feeding cattle in the winter – now knows what they are! 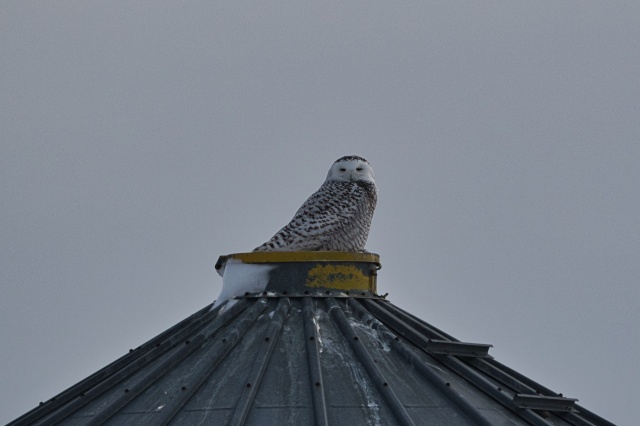 …and 3 Sharp-tailed Grouse were sitting in a tree, but 2 had flown off before Bill got his camera out the window.

We received this beautiful photo of Bill’s family who were together for Xmas:

Also this one of Leslie Usher w/ partner Michael, who bought a piece of land in the Margaree Valley of Cape Breton Island, NS!  They are pioneering there & really enjoying winter!

Winter hadn’t been too horrible…until February, but it came on with a vengeance & stayed all montth with temps around -30C (-22F)!  Plus snow, over & over again!  It was so cold (& dry) at least I could blow the snow off the sidewalks with my leaf blower!  Much easier than dragging the actual snow blower around the house. 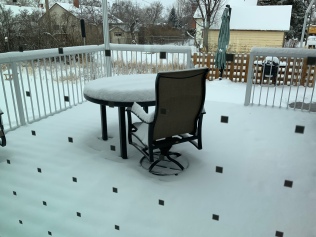 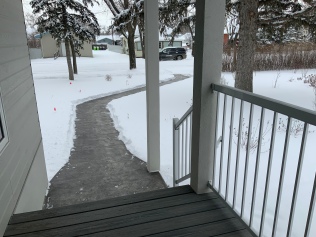 Poor little birdies – it must have been hard for some of them.  We kept our heated birdbath filled at all times (& this year the deer didn’t drink it nor sleep in our back yard!).  Also kept lots of seed in the feeders.  Luckily our little miss sunshines (Natasha & Katrina) know how to keep warm: 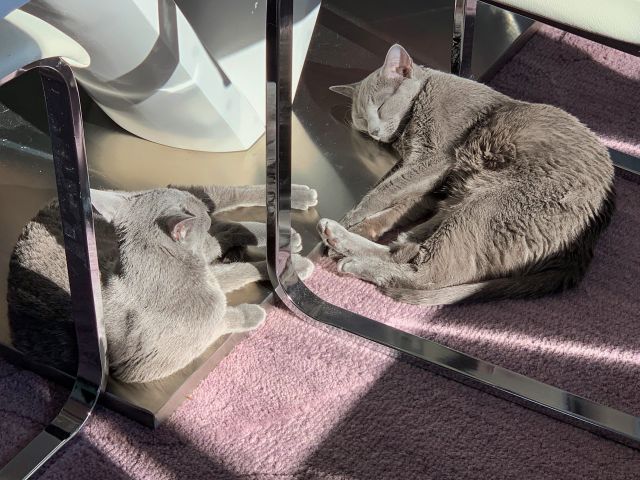 In early March we had our friends Kevin & Rhonda over for dinner.  It was a landmark occasion – but not for the food (as you may have though HA HA) – but it was about cats!  For the very first time someone else touched one of our cats – Katrina (always the bravest of the 2).  Luckily I got a photo of Katrina walking under Kevin’s hand then Rhonda’s hand – HOLY MACKEREL  – couldn’t believe it!

Anyone who’s been here knows they never get to pet our cats.  So this was truly AMAZING!  The new Cat Whisperers!  They brought us a little present – a stuffed snowy owl.  I guess Katrina thought she should show some interest in it, since she showed so much in them!

Spring was a most welcomed respite from this last blast of winter & we did more birding than we’ve ever done, even since we first met!  SO MUCH FUN!  The very most exciting find has been a Sharp-tailed Grouse lek (dancing ground).  These solitary birds only get together in the spring for mating, & the males do quite a dance. 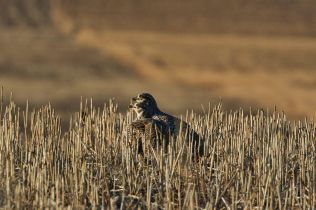 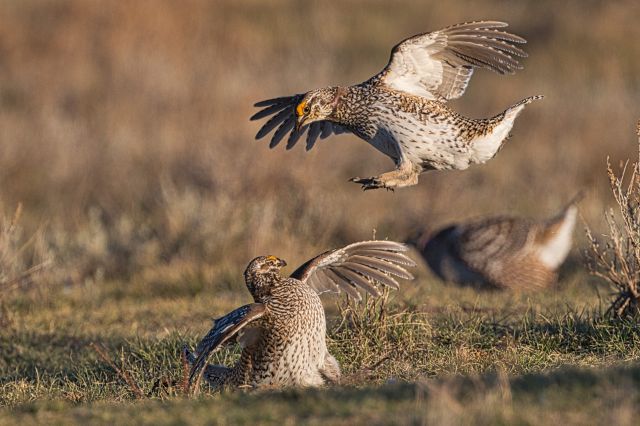 Our first visitors were John & Monika Cowell from Calgary.  John is a physician who was in charge of quality control in the field of medicine for all of Alberta, who has retired & joined the board of LivingWorks.  They are delightful people & have a keen interest in wildlife,  Monika has actually taken a birding class at Inglewood Bird Sanctuary – the place I met bill in 1975!  Our weather was excellent & they really appreciated seeing the lek, since they rarely get up at 5 AM any other time! HA HA!  Here we are:

The Western Meadowlarks were singing:

The Long-billed Curlews were in the fields: 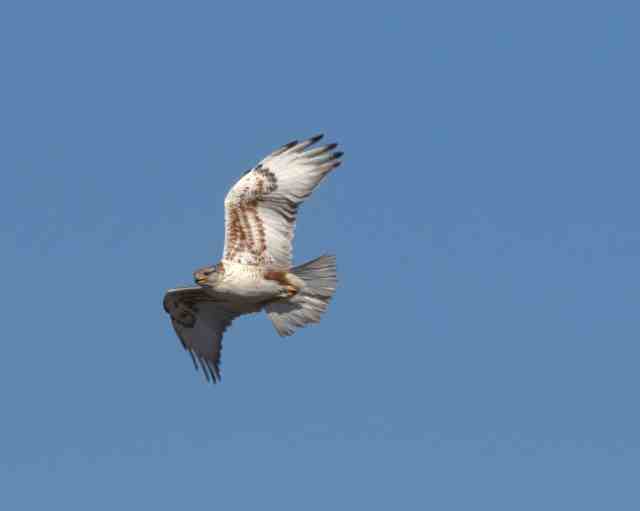 Prairie crocuses were in full bloom:

The deer & the antelope still play! 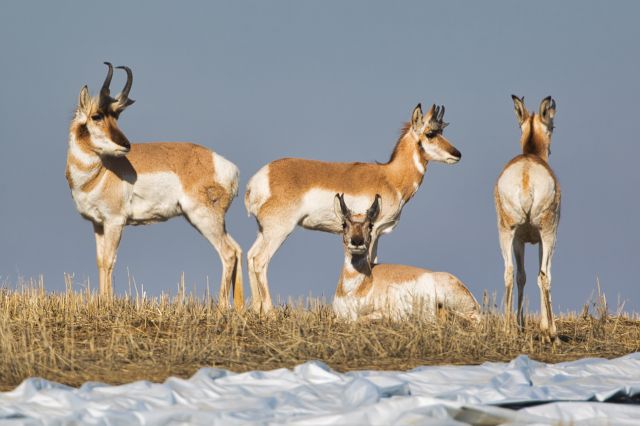 Now THAT’S WHAT I’M TALKIN’ ABOUT!  How much fun is spring on the prairies!  Our favourite place on earth & favourite time!

John & Monika’s daughter, Corinne, is a fabric & mixed media artist & they brought us a beautiful gift she made.  A Mountain Bluebird, which we proudly display on the piano:

We stopped in one day while birding near Hazlet to have lunch with Karen & Harold.  I have always wanted a photo of their sign:

We had tried to eat at the little restaurant in town but found it was closed on the weekend, so called them & they were just about to have hot dogs for lunch, so we got invited over!  They’re so nice to us – & we love them!

In the middle of April we made a trip to Calgary.  This coincided with close dates to Brian & Bill’s birthdays (which has always been celebrated together, since they’re only 2 days apart, though 13 years: 62 & 75!).  Poor guys haven’t really had an individual celebration for years, but we’re always happy to get together with family.  So we had dinner out with Mom & Jane: 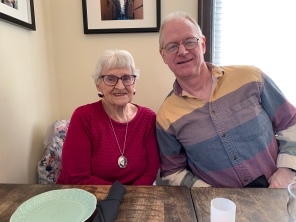 On April 28th we had another HUGE dump of snow (nearly a foot).  This time it was so wet & heavy there was no possibility of blowing it away.  I don’t think anyone in town shovelled, but I went out in the driving wind & knocked the snow off my lilac bushes which were weighed down due to their little leaves trying to bud out!  (Poor little things 😢). 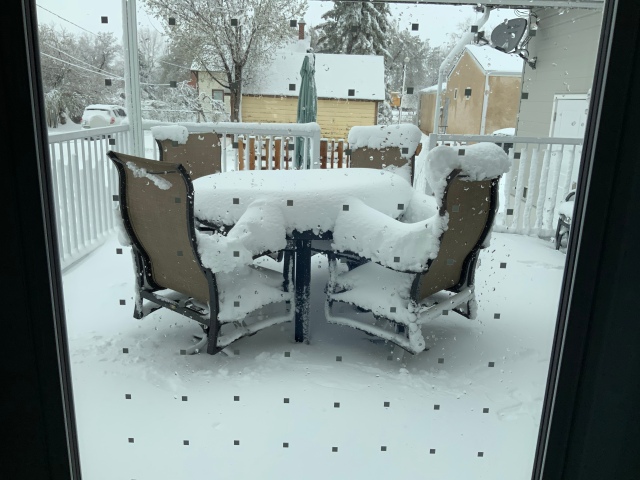 Luckily, spring really was around the corner this time & we’ve been out birding lots of times and here are 2 more photos to share.  The famous (at least to those who don’t live in their distribution area) Cinnamon Teal:

…and the cuter-than-cute Black-necked Stilt. 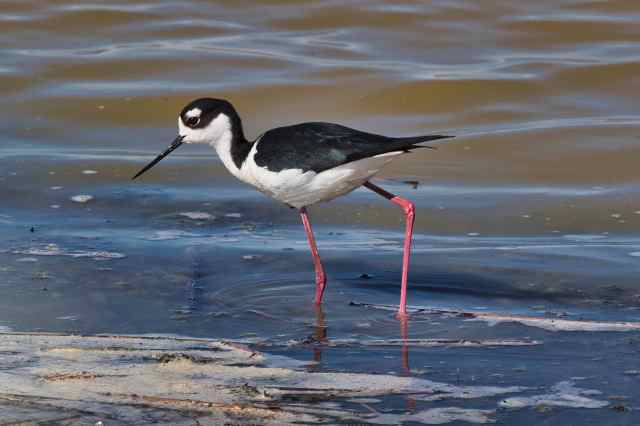 The other day we received this beautiful photo of 2 eagles which had landed in the tree in their yard.

So in return, Bill sent them a Western Kingbird!

That’s is all for now.  I’m expecting Mom shortly.  My best friend Sandy is driving her out here & will stay for a couple of days.  So looking forward to their visit!