Before leaving the park this morning, we found a pair of Cassin’s Kingbirds (for the 3rd day) perched in the top of the trees nearby.  Bill was able to get another photo.

Went to the lake This morning – gathered 8 new species, so finally have over 100 – 105 actually!  We stopped at the visitor center first to find out where the Blue-footed Booby was to be found, but it is closed Tues. & Wed.  A woman at the store in Patagonia told us that there really is one there (we were sceptical that it was reported by a good enough birder, since they shouldn’t be here – but sure enough!).  So we’ll come back for it.  On the way into the visitor center I saw something my friend JB also found the other day – a crested barrel cactus!  I was jealous & have been looking for one since he saw his.  And that is a TENT pitched to the left – wooh, brave souls!

We have just about seen the complete list of “recent sightings” given out by the center, but still missing a few.  Saw a far-off Greater Egret, a Green Heron just taking off, finally identified a Neotropic Cormorant (though we knew they were there somewhere with the Double-crested), had a quick glimpse of a Greater Roadrunner running through the brush, finally identified another dove – Common Ground Dove, followed & got a quick shot of a Northern Goshawk (not good enough for the blog, just helped us identify it), got a couple more ducks for the list – Canvassback & Green-winged Teal, and finally spied a Golden Eagle high in the sky above the lake (too high to photograph).  Our old friend the Great Blue Heron came very close this time – wanted his “head shot” I guess.

There was some pretty grass among the rocks at the top of the hill where we were looking for the Booby. 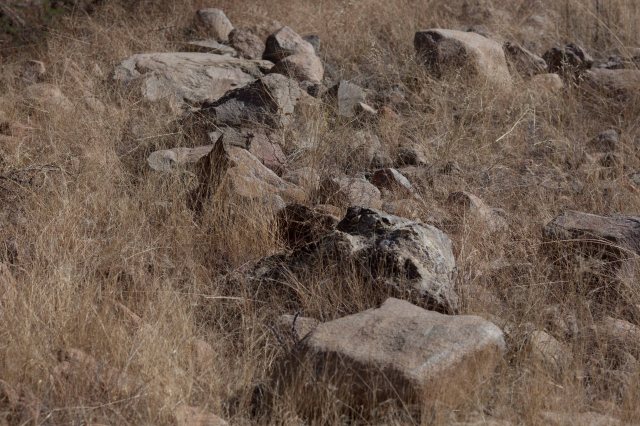 The cats are doing well.  Last night however, Tyrian started meowing & meowing when we were in bed reading – I finally got up because he wouldn’t settle down.  I came into the front where his bed is & petted & reassured him, but he still wouldn’t settle.  I felt something cold at the side of my foot – & realized water was running across the floor!  The boys had a little tussle earlier & obviously spilled their water bowl.  That smart Tyrian was letting me know!  Good work boy!

Thursday we went to the lake again, but couldn’t find the trogon.  It was actually very quiet both bird wise & people wise – day before US Thanksgiving.  We found out the Booby was seen the end of August – meaning it is extremely unlikely to still be here – likely gone off to the Sea of Cortez.

We did find a kill site – something (maybe a bobcat or mountain lion) killed a Wild Turkey.  I collected a few tail & wing feathers.  I guess people are not the only ones eating turkey on thanksgiving!

In the afternoon Bill was working & an amazing thing happened.  Another Airstream pulled into the RV park (now that’s not so amazing) – but the stunner was that they had the exact same truck as we did!  Holy Mackerel!  Here are the twins (they’re from Texas & have the unit on the left – we’re on the right).

Bill spoke to them later & had a great laugh about this coincidence.  They are retired immigration lawyers & RV full-time.

Awhile later Mike dropped by with a plate covered with tinfoil.  His wonderful Chinese wife’s speciality is dumplings – so he had a bunch for us to try!  They were absolutely amazing – beautifully formed (& it is an art) as well as delicious.  What a wonderful thing to do – we are very thankful this US Thanksgiving day!

Friday walked the Nature Conservancy for maybe the last time.  Added Lazuli Bunting to the list & got a photo of a Lesser Goldfinch.  Nothing else new.

It was a gorgeous day with low wind, sunny skies & high around 20 C.  Bill took many tree photos. 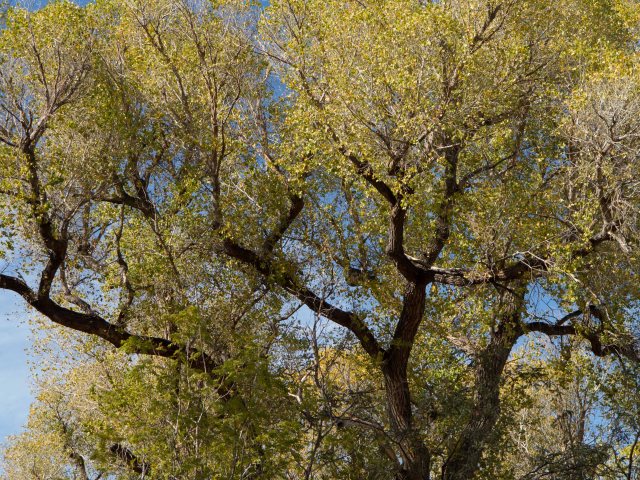 On the way home we pass a field where a few longhorn steers reside & we see them a lot.  They’re great lookin’ critters & I couldn’t resist having Bill take a couple shots. 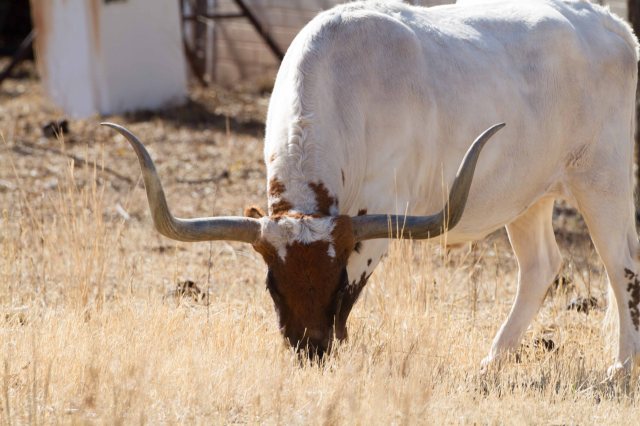 This guy, however, objected to his doing this & charged the fence (flimsy, barbed wire), snorting & spewing mucous all over!  It was a bit of a scary moment I must say!

We have only 2 more days here, then off to Amado Sunday!  Hope we can find a Montezuma Quail tomorrow!